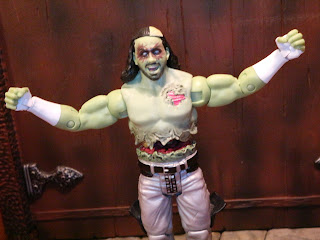 I'm going to keep it simple: This is an action figure of a zombified Matt Hardy that can split in half. It's three crazy things (zombie wrestler, Matt Hardy, and a toy that splits in half) that make this figure exponentially cooler than anything else you'll find. Matt Hardy may or may not be retired now but there is no doubt the man is a future hall of famer (possibly two time hall of famer for both himself and his tag team work with Jeff Hardy as the Hardy Boyz) and has made a huge impact in the WWE. He's also known for being insanely entertaining and has been well known over the past couple of years for his Broken/ Woken gimmick. Of course, now he's a green zombie that splits in half. Literally "broken" you might say, eh? Let's check out the incredibly cool zombie Matt Hardy after the break... 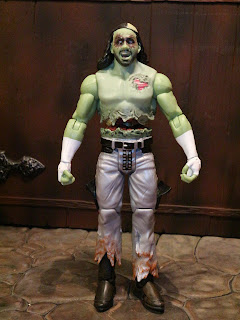 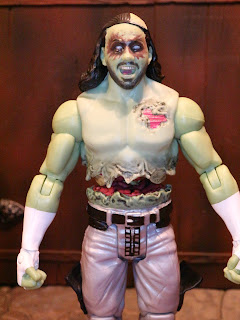 
* Once again, Mattel has done an excellent job of turning a WWE Superstar into a zombie. Zombie Matt Hardy is easily recognizable but definitely has the green skin and missing flesh one would expect from one of the undead. We're going to talk about the massive gash across his abdomen shortly but for now I want to point out that crazy patch of missing flesh on his chest. Is that a bite or something? It sure is gruesome looking! 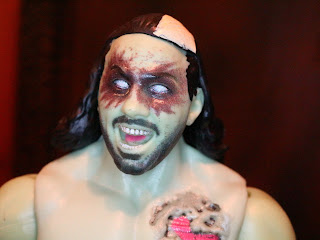 * The face is pure Matt Hardy. Man, the dude sure has some great facial expressions, doesn't he?  I believe this might be a reused Matty Hardy headsculpt with some new paint applications to give it more of a zombified look but I think it is really effective. The crazy eyes and the work on the facial hair is excellent. 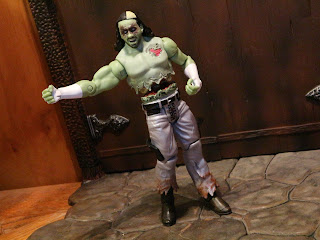 * Like the est of the male WWE zombies, Matt Hardy has the Basic articulation scheme. He does have some limited torso articulation, however, as his spine does swivel. He's still quite well articulated, particularly in the arms, and he's lots of fun to play with. These are sturdy, fun action figures that kids and collectors who love gross stuff should go nuts over. 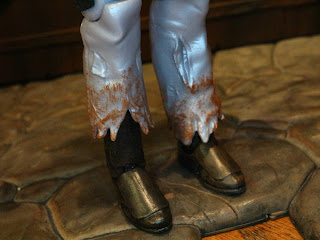 * I love the muddy look of the legs of all of these figures and Matt not only has muddy boots but he also has ripped up pants legs. It's a great effect that further sells the idea of this figure as a shambling walker. 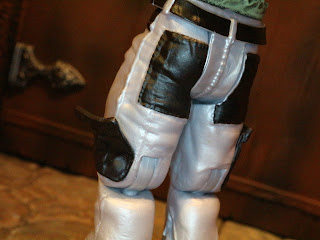 * Zombie Matt Hardy is wearing cargo pants but the pockets have been ripped, and thus are hanging loose. This is a pretty minor detail but it adds to the worn, ragged feel of the figure. If these are from another Matt Hardy figure then I just don't recall it. I figure they're unique to the zombie version. 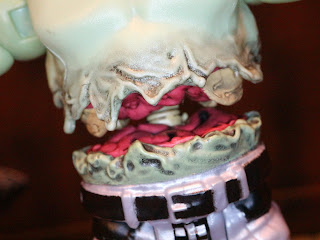 * Yuck! Matt Hardy looks like he has had some pretty nasty damage to his mid torso! What happened here? This is really gruesome and makes for some of the best zombie damage I've seen on an action figure. It reminds me of some of the old Toy Biz Resident Evil figures, which are some of my favorites. 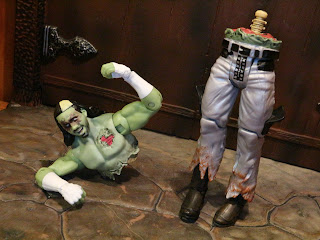 * OK, so not only does Matt Hardy look absolutely crazy in the middle but he splits in half! The package doesn't advertise this feature but he splits apart too easily for this to be coincidence. How cool is this! It reminds me of the Resident Evil 2 Zombie Cop from Toy Biz! This is incredible and one of the best features from any figure in this line! 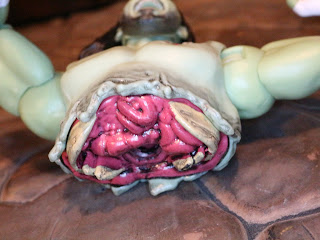 * Not only is Matt Hardy "broken" but he also has lots of guts and stuff oozing out. Gross! But cool. 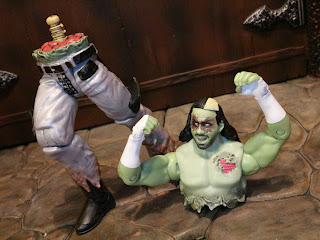 So far WWE Zombies series 3 is shaping up to be another winner but Matt Hardy might be the champion of the set.  Not only is he just a cool looking figure but the fact that he splits in too is just bonkers. I love it! This is an Epic toy not just for WWE fans but for anyone who loves quality zombie action figures. He could easily fit into nearly any 6-7 inch scaled zombie collection! Matt Hardy will not die!


This is the first action figure of Matt Hardy I've reviewed. For more WWE Zombies figures check out the following: