Today I'm checking out another figure from the newest series of Star Wars: The Black Series figures and this time it's a character from Solo: A Star Wars Story: L3-37. A droid who is constantly improving herself, often literally, L3-37 has oddly became a popular character to hate on by many Star Wars fans. Portrayed by Phoebe Waller-Bridge, L3-37 is a a droid companion of Lando Calrissian who has cobbled herself together from a variety of droid pieces. She's also very interested in the concept of droid rights, and it seems to be for this reason that the character is getting so much hate. While C-3PO wasn't what anyone would call an activist, aren't there plenty of times when he opines about how droids are treated? It seemed like a logical perspective for an in-universe character to have to me. Anyways, I'm still mystified why Hasbro didn't release many of these main Solo characters when the film was released but we're just now getting a few of them so let's check out L3-37 after the break... 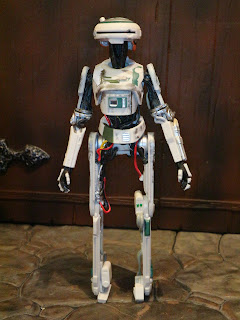 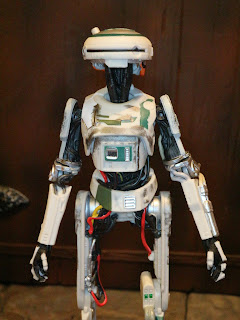 * L3-37 is an impressing looking figure. Hasbro did a rather admirable job of taking the character's unique, cobbled together design and translating it into an action figure. While the actual film design has some elements that would be nearly impossible to capture, the figure visually works really well within the Black Series. There is a lot of detailed sculpting and paintwork here that shows off some really strong work by Hasbro. 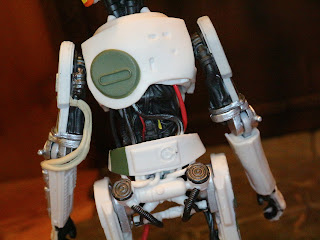 * From the back you can see the many intricate wires and small elements Hasbro has captured here. I love the work here. L3-37 is a pretty unique looking droid and the piecemeal nature of her design is definitely represented. 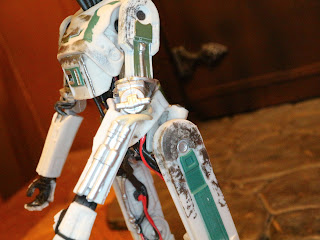 * The paint work is overall quite impressive. I love the various colors and weathering here. It's quite well done and definitely shows off the improvements the line has experienced over the past year or so. 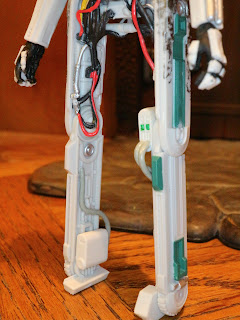 * The legs have detail inside and out and capture the character's unique design. The various wires that run up and down the interior of the legs are separate pieces permanently attached but they give off the feeling of a mixed media piece. 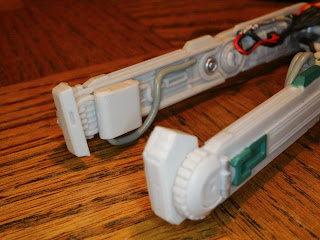 
* It might be faithful to the film but L3's small feet really make standing difficult. Near impossible, you might say. Hasbro should have either made them a bit larger or included a stand of sorts. L3-37 is probably going to be making a few tumbles from your shelf if you're not careful. 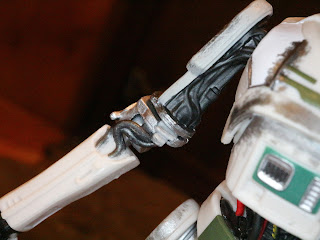 * L3-37 doesn't have the best articulation. Some places are fairly solid but the elbows and hips are really poorly executed. The design has wires in these places so when you try to move anything you risk straining and breaking the wires. You gotta be really careful here, something that makes a toy much less fun. 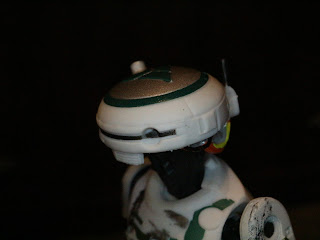 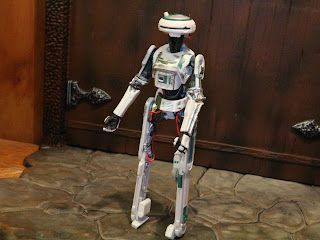 I like L3-37 as a character, and she's incredibly visually interesting, but the Black Series figure has some problems. The figure doesn't stand well and she doesn't move well. I don't quite know how Hasbro could have approached this figure more successfully, but I'm not thrilled with what we have. I think Hasbro will probably knock the 5 point of articulation 1/18th scale figure out of the park, but this one is just kind of an Eh and a 1/2 figure. She's definitely not one of the standouts of the line but she's a character I doubt we'll ever see again in the 6 inch scale. Do what you gotta do.


This is the first figure of L3-37 I've reviewed. If you're looking for more Star Wars: The Black Series figures, check out the following: