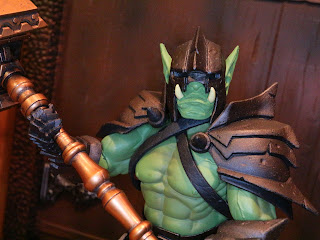 For today's Re-Halloween review I have to give thanks to Zack Fenton, a friend I met on the one of the Mezco: One:12 Collective Facebook groups. Zack sent me this figure as a bonus during a trade we made back in July or August and I really appreciate it! Thanks again, Zack! I try to mix up everything in 31 Days of Toy Terror and Re-Halloween so I decided that a monstrous Orc would be a great addition to the line-up. This is actually the first Mythic Legions action figure I've owned, which might surprise you. Mattel's Masters of the Universe Classics is one of my favorite toylines ever and, in some ways, Mythic Legions is kind of a spiritual successor to that line. I really like the look of the figures but the fact that they typically have been sold in huge sets has kind of turned me off. There are quite a few lines lines like this that I have been interested in (Mythic Legions, Vitruvian Hacks, Zombie Lab, and Dime Novel Legends all come to mind) but the amount of product offered at once combined with the price tag kept me from hopping in. I collect a lot of stuff and currently can't commit at once to that much product, sadly. Of course, there is no reason I can't cherry pick, right? This Orc is officially named Orc Legion Builder 3 and he is specifically an army builder figure. They tend to run about $10 bucks cheaper than the named characters and while they have a bit less paintwork, they're useful for serving as generic villains. There really isn't a comparable Orc figure in MOTUC, so that's probably where he'll end up in my collection. MOTUC needs more Orcs! Let's check him out after the break... 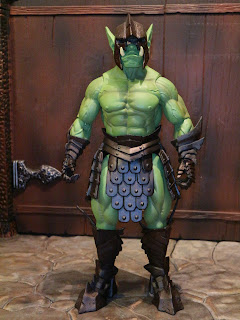 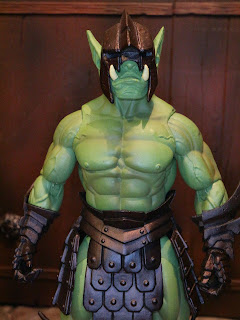 * I really like the look of these figures. They definitely have many of the same aesthetics that the Four Horsemen brought to Masters of the Universe Classics but with more of a Frank Frazetta and World of Warcraft flavor. The bodies are rather detailed with good muscle definition while the armor looks pretty severe and stylized. The green body of the Orc looks pretty good, too, and should make many fans of Dungeons and Dragons happy. 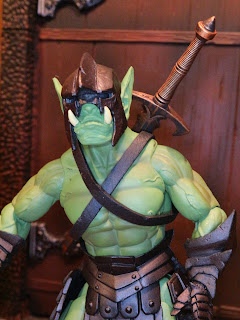 * To help make the Orc a bit more exciting, he has some straps that fit across his chest. You can use one, none, or two to customize your figure. Each strap also has a slit on the back so the Orc can store weapons in them. 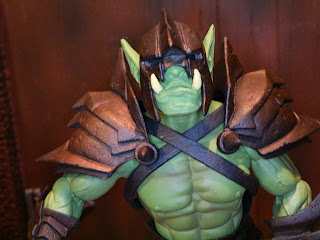 * To further customize your Orc and outfit him for pillaging and plunder, he has two massive pauldrons that fit into holes on his back. The pauldrons look great and, again, giving him one, none, or both allows you more customization in your orc army. 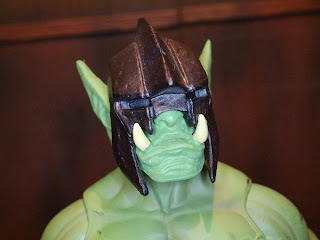 * The Orc Legion Builder has two headsculpts included and they swap out really easily since they sit on a true balljoint. The first portrait features the Orc wearing a helmet that covers his upper face and head, exposing his ears and fangs. The helmet reminds me of the helmets with the long, narrow eye-slits many of the Uruk-hai wear in Lord of the Rings. 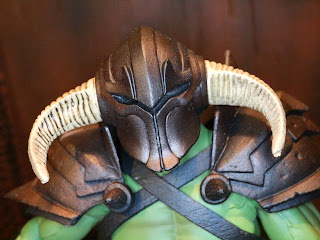 * The second helmet reminds me of something the Dragonborn would wear in Skyrim or maybe even the Death Dealer's helmet. It has those long horns on the side that just look so wicked cool. This guy pretty much belongs in an epic metal band, just saying. 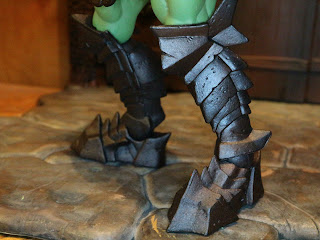 * The boots are cool, too. The Four Horsemen seem to love large, wicked boots on action figures and these are some of the best they've ever done. 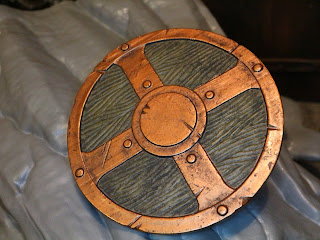 * The Orc Legion Builder comes with some pretty sweet weaponry. First up is this round shield. I love the work on the wooden body of the shield and the real metallic look of the bronze edging and straps running across it. On the back is a wrist cuff that easily fits over the Orc's forearm. The wrist cuff is removable, although I'm not sure the reason for that. Maybe you can hang the shield on a wall or swap out different cuffs in different sets? 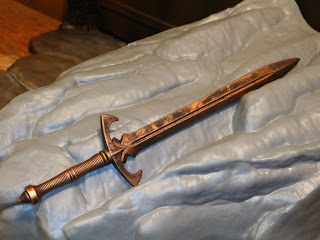 * The Orc's sword is pretty long and looks like it could deliver a good thrashing to whomever gets in his way. It also has a great weathered paintjob. It's amazing what a good paintjob can do for an accessory, isn't it? 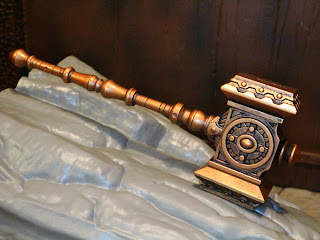 * Last, but not least, the Orc comes with a massive warhammer. Dang, this thing is intricate and wicked looking, right? Imagine the damage this could do! Beautiful sculpt and beautiful paint really make this a pretty impressive accessory. Interestingly enough, one of the hammer's heads is removable. Again, not sure why; customization options maybe? 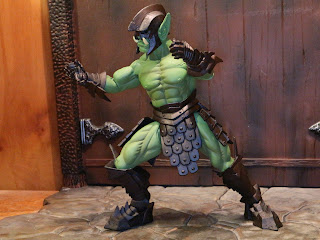 * The articulation on the Orc is pretty solid. It reminds me a lot of Masters of the Universe Classics except the joints have a better range of motion and there are a few extra joints such as better ankles, hinged wrists, and the balljointed waist. These guys feel really durable, kind of like MOTUC or Marvel Legends. The plastic quality is excellent and everything feels very sturdy and well made. This gives me a lot of confidence to preorder a few of these in the future. 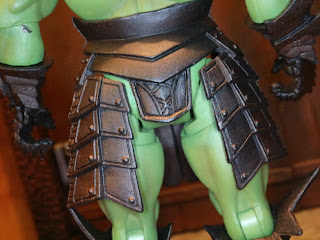 * So... the Orc is totally going commando. I'm sure there's a market for this, but it's not me. Maybe a longer loin cloth in  the back or some brown paint would have helped. 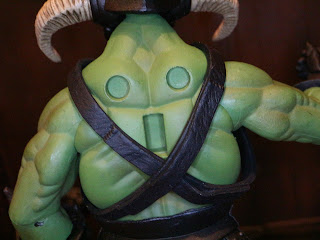 * The back of the Orc has some visible holes and a slot. The holes are for the pauldrons and the slot is probably used on other figures that share this sculpt (the line uses lots of shared parts). Still, if you're posing these guys in battle it would be nice to find a way to cover those holes. Maybe some plugs or something? 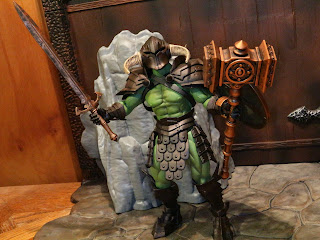 The Orc Legion Builder 3 is a pretty impressive figure. The line is a bit pricier than you may expect but everything is done extremely well here. Lots of accessories and interchangeable options give you some cool customizing options here to create a variety of nameless, faceless Orc grunts. This is a Great and a 1/2 figure and definitely gets me more interested in this line. I can't imagine you could go all in unless this is all you collected, but I can certainly see the appeal of picking up a few figures here and there. Again, thanks to Zack Fention for providing this figure for me to review today!