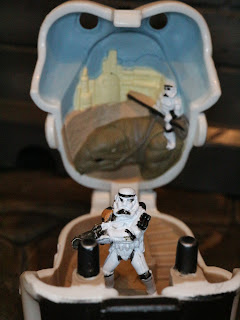 Since I've currently been working towards completing my collection of Micro Machines Mini Heads guess what you're going to be seeing quite a few reviews of? That's right: Micro Machines Mini Heads! Like the Weequay set I reviewed a few days ago, the Stormtrooper was also available in the internationally released Mini Head Playset Collection V and in the US as a Pizza Hutt exclusive in 1998.  This one was from the Pizza Hutt release as it came sealed in a marked plastic polybag. The Mini Heads are pretty small (less than 2 inches tall) and don't really offer a lot of play value; the intention behind these seemed to be more about getting Micro Machines collectors some unique microfigures and a fun way to display them. With the microfigures being the main selling point I was initially disappointed that Galoob wasted a space on a Stormtrooper. How many Stormtroopers did we get in the Micro Machines line? Open this one up, though, and you'll realize that this is actually supposed to be a Sandtrooper. The helmets are fairly similar (it's tough to tell from this sculpt) so you might not be able to tell from just looking at the Mini Head but the microfigure is clearly a Sandtrooper Squad Leader. Considering that we never got a stand alone Sandtrooper microfigure (the Sandtroopers included with the C-3PO/ Cantina set were unusually stuck together) this is a pretty desirable microfigure. Let's take a closer look at it after the break... 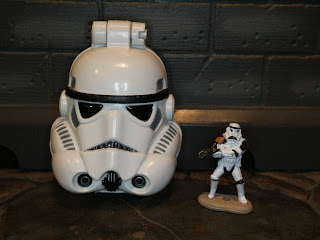 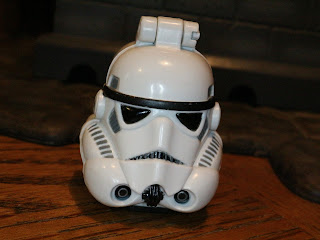 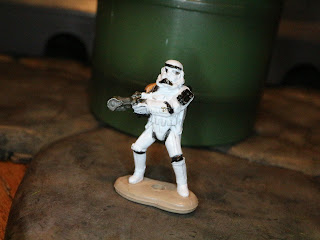 * The included Sandtrooper microfigure is great. While the paint apps might be a bit "rough" (which is tough to judge on such a tiny figure), there does seem to be a lot of detail. I love the orange squad leader's pauldron, the blaster, and even the extra ammo pouch on the left shoulder. The pose is great and definitely makes for a fun microfigure to add to battle scenes. 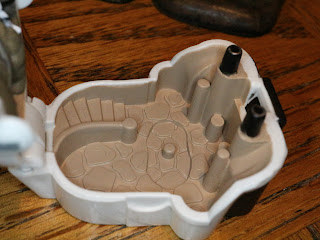 * The base of the Stormtrooper's mini head playset is kind of cool if a bit nondescript. It is a simple Tatooine structure with a cobblestone like floor, possibly either a random outdoor area in Mos Eisley or a segment of the Lars homestead. The stairway going down definitely leads me to thinking that we're looking at the Lars homestead here. is this one of the Sandtroopers who executed Uncle Owen and Aunt Beru? Sheesh. That's dark. 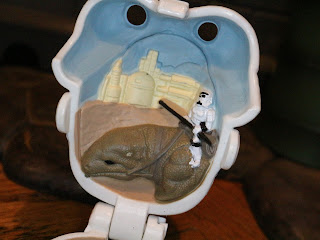 * The back of the playset features a relief of a Sandtrooper riding on a Dewback with what looks like maybe Mos Eisley in the background. Mos Eisley wasn't really visible from the Lars Homestead, so maybe this is just a random seem taking place right outside of the city limits. 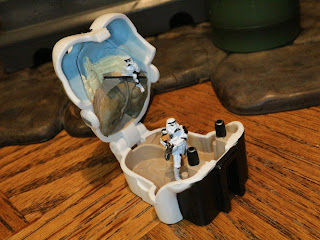 The Stormtrooper/ Sandtrooper set definitely filled a microfigure need for the Micro Machines line by giving us a stand alone Sandtrooper. He's a Great microfigure with a fairly interesting diorama, too. The Stormtrooper Mini Head is one of the heads I tend to see less frequently but considering he was released in the US through Pizza Hut he definitely isn't as rare as the sets never released here such as 4-LOM, Luke Skywalker, and the Snowtrooper.