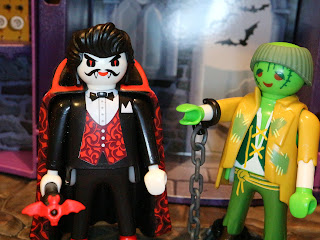 For today's Re-Halloween special I'm checking out final of the three Halloween 2-packs released by Playmobil for Halloween 2018: The Vampire & Monster! These are definitely not the first figures of a Vampire or a Monster released in the Playmobil line, the ability to snap them up in one set for about $6. This another set I snapped up from the incredibly cool Dancing Bear Toys in Hendersonville, NC at the beginning of October, so these cool little guys have been chilling with me for most of the Halloween season. Let's check out this spooky duo after the break... 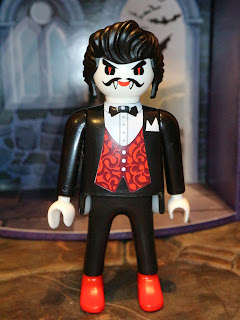 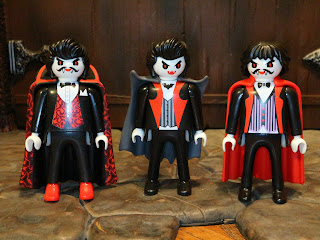 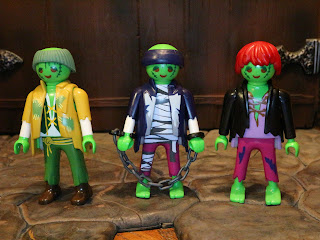 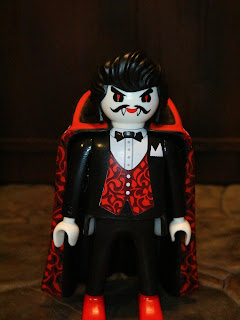 
* The Vampire is really cool. I think this is definitely the spookiest of the three recently released Vampires and looks great with his elaborately printed vest, bow-tie, and tuxedo square. He's dapper as all get out! 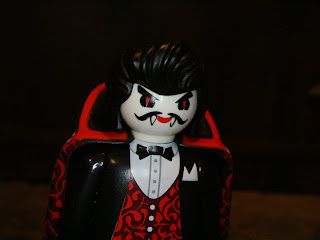 * The head is pretty cool, too. I like the pompadour, although it's definitely not the hairstyle I think of when I think of Vampires. The eyes and fangs are pretty eerie, though, and work well for the figure. 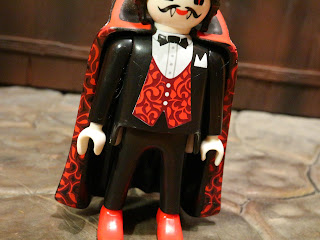 * The Vampire has a much more elaborate cape than many other figures. I like how the collar pops up around the neck and has some awesome red trim and a print that matches the vest well. Not everyone can pull off a cape, you know. 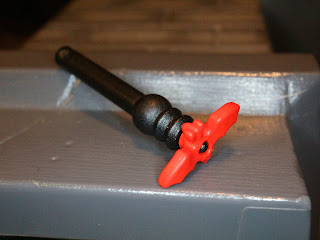 * The Vampire comes with a two piece want with a bat on the end. Wait, is this a wand or is it a brand? Is this Vampire branding people like Batman was in BvS? Yikes! That's kind of dark, Playmobil! Look, the brand is even red hot! 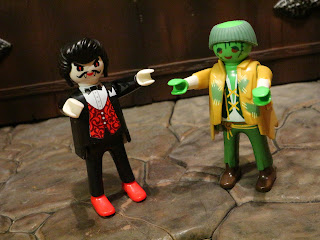 * Both figures are built like standard Playmobil figures which means they're durable and have a limited, but consistent, range of motion. Klickies are always fun to play with and, thanks to their swivel wrists, they hold stuff really well. * Here is the monster. He's pretty cool, particularly the old patched up jacket and the laced up vest and shirt. The printing on this guy is really strong and he retains that odd Playmobil charm that their horror themed figures have. It's just such an odd design for a Frankenstein styled Monster, but it works here, for some reason. * Unlike Lego, Playmobil rarely creates new hairpieces so the Monster is left with what was the hair piece for a Playmobil monk. It works, but man is it an odd choice. I do like the face printing, though. This guy looks like he's in a bit of a daze, don't you think? 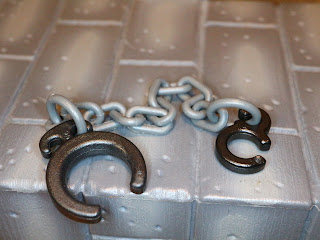 * The Monster comes with a set of manacles. One of them features a smaller clip for his wrist while the other is designed to fit around his ankle. They're made from plastic (unlike the metal chain included with the Castle Ghost I had as a kid) but they seem quite durable. I guess they're designed to keep the monster chained up when the Vampire is branding.... ohh... I see what's going on here. 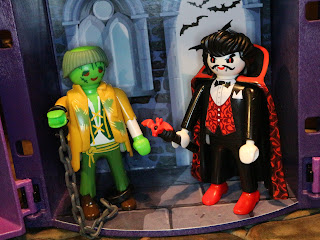 Hey, you know what? I think this set is probably the best of the three Playmobil Halloween 2-packs. It's colorful, fun, spooky, and comes with some cool extras. Whether you're just picking these up for your kids to add to their Playmobil collection or whether you're adding them to your Halloween display, these are pretty cool little figures, especially for $6 bucks for the pack. This one is a Great and a 1/2 set and it is definitely worth tracking down. Playmobil seems to release their product on a 2 year cycle so you probably have another year or so to pick these up before they get discontinued.