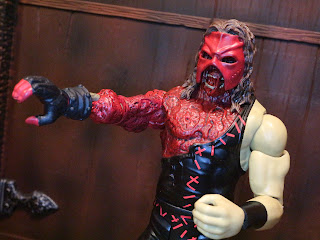 While I ordered the rest of WWE Zombies series 3 from Ringside Collectibles, they didn't have Kane in stock when I made my order. I ended up stumbling across Zombie Kane at a Wal-Mart near my office, which was pretty cool. I wasn't expecting the WWE Zobmies to appear in retail stores yet so making an in-person find was a real treat. Kane definitely seems to be the most popular of the series 3 figures, probably because he's been wrestling for over 25 years and you'd have to be living under a wrestling ring to not know who he is. Heck, the man just wrestled at Crown Jewel recently in a tag team with his "brother," the Undertaker. Wrestler. Insurance Salesman. Dentist. Mayor of Knox County, TN. Christmas Creature. Movie Star. World's Greatest Director of Operations. The Devil's Favorite Demon. Kane is all of these things, and more. He's the Big Red Machine and now he is a zombie. Let's check him out after the break... 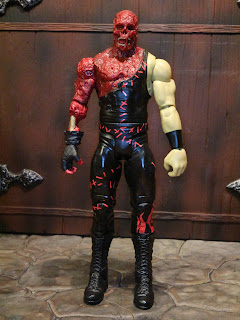 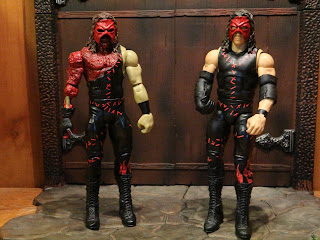 * On the left is the Zombie Kane figure while standard Kane is on the right. I only own one other Kane figure and it is the Elite Series 31 version. While these figures look similar, since the Zombie version uses the Basic styled articulation instead of the Elite styled, the only parts they share are the left arm and the mask. 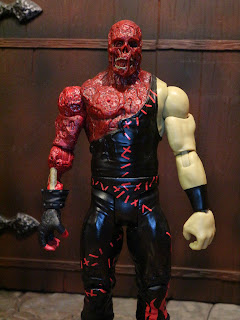 
* Wow. Mattel went all out on this guy, didn't they? They took the Big Red Machine and turned him into a large, hideous red bloody skeletal zombie. I feel like I say this too often about this line but it is amazing to me that Mattel is releasing some of the most hideous figures ever seen at retail in this line. Kane's black outfit with red stitching is easily recognizable but it has been torn on around his right side, along with the upper right side of his body. This guy is seriously gory and seriously fun. 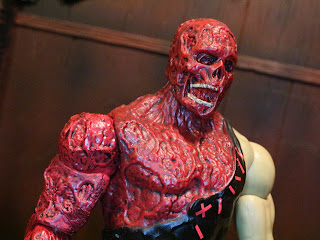 * Here's a close-up of the detail work on Kane's chest and head. Something about him reminds me of the zombie dad from The Father's Day segment of Creepshow, which is an automatic win in my book. He may not want cake but this definitely isn't a zombie you want to come after you. The paint work is gruesome and just really, really colorful in a bloody good way. 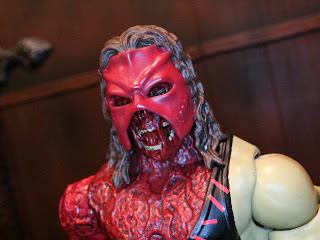 * Kane includes his mask which is a welcome treat. It's pretty essential to his look, too. It's not any different than some of the other masks included with other Kane figures but it works quite well here and adds an extra layer of eeriness to the figure. 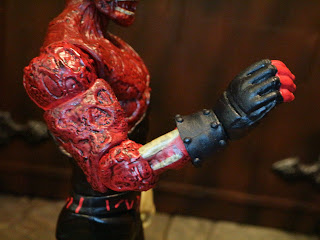 * Kane's left arm is pretty well ripped up as not only is all of the flesh missing (maybe it's supposed to be burned?) but the bones of his forearm are even exposed. It's a great effect and rivals many of the other (though still relatively few) 6-7 inch zombie figures. 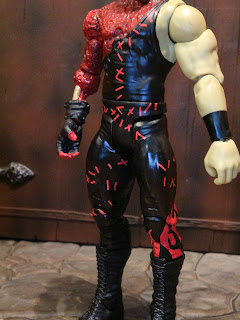 * Kane's outfit is mostly painted on but the red stitching looks great and is very neat and cleanly panted on. 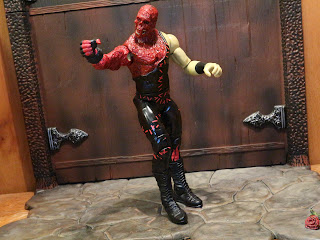 * While he only has the basic style of articulation, Kane still has some solid motion in his arms and a great balljointed head. These are all really fun, really durable action figures that look good on display or can handle some real wrasslin' action. 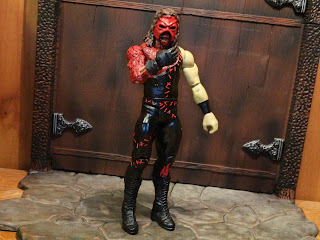 Kane is not just another solid entry in this series but he's a Great and a 1/2 figure and definitely on of the standouts. I really like this unusual series of WWE figures and I'm looking forward to hopefully getting a fourth series next year. It seems that Mattel is refraining from releasing zombie versions of deceased Classic Superstars (which makes sense), so we can probably forget zombie versions of Andre the Giant, Ultimate Warrior, Rowdy Roddy Piper, and Macho Man but for figures of some Superstars who are still with us (and some active), it would be great to see Mankind, Big Show, Rando Orton, Iron Sheik, Alexa Bliss, Razor Ramon, The Miz, Goldberg, Chris Jericho, Becky Lynch, Asuka, the New Day, and, of course, Ric Flair. Maybe we'll someday see that Zombie Hulk Hogan figure as well, not that he has appeared at WWE events again.

If you're a Kane fan, check out my review of the Elite 31 Kane.

For more WWE Zombies reviews, check out the following: