Action Figure Review: Stridor from Masters of the Universe Classics by Super7 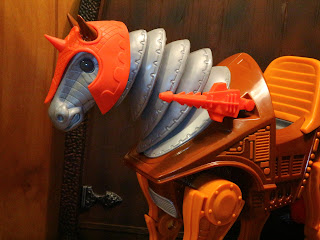 One of the last releases in Mattel's Masters of the Universe Classics was Night Stalker, who came out in October 2016. Although Stridor wasn't officially announced by Super7 until April of this past year I think we all knew he was coming. Night Stalker and Stridor are really and truly the same toy with different paint schemes. Super7 put Stridor on preorder from April to May and then delivered him over the summer. I just got picked mine up last week, however, and man, does he look nice! As Mattel was phasing out of MOTUC there were definitely a few purchases I held back on at the time but now I'm catching back up and gathering up some of the late Mattel and early Super7 releases I missed out on. Stridor was a huge want for me as I remember getting the original toy in the two-pack with Fisto for Easter (probably in 1987). Ready to check this updated version of Stridor out? Then join me after the break... 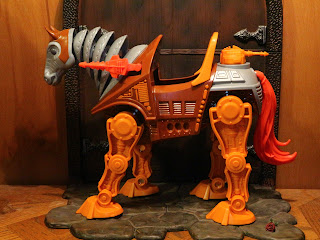 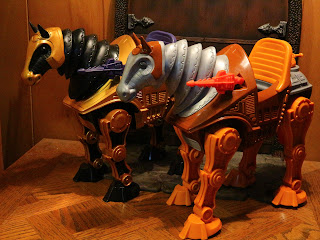 * Here is a comparison shot between Night Stalker (rear/left) and Stridor (front/ right). Again, these truly are the exact same figure and thus I'm going to really refer you to that review for the full scoop. I will mostly just be hitting the highlights here, reusing text from Night Stalker's review, and showing off some pictures. The two differences, other than paint, are that Stridor has two helmets and that he has a different control panel sticker than Night Stalker. 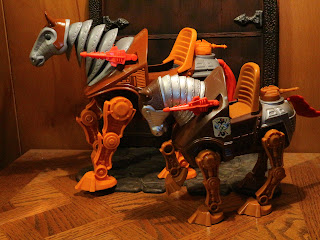 * Here's a shot of the MOTUC Stridor with the vintage toy. I'm always surprised that Mattel didn't try to capture the crest prominently displayed on the vintage toy's side. What an odd thing to leave off, huh? Still, it's so cool to see the MOTUC version of Stridor. While the MOTUC figures are larger than their vintage counterparts, the vehicles are where the size difference really strikes you! 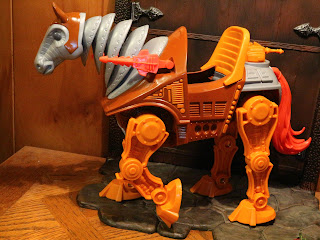 * While the vintage Stridor just stood around and looked cool, this guy is fully mobile. Not only does he have joints on each leg (ankle, knee, and hip) but they actually look to have metal centers to help improve their durability. While he can't rear up on two legs without support of some sort, Stridor is pretty well articulated and can definitely stand in a number of poses with at least one foot off the ground 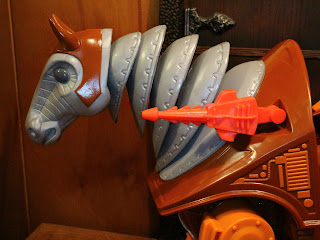 * I love the idea of the two laser cannons on the front of Stridor but the execution here is still a bit lacking. They do swivel but they feel a bit cheap. I don't know; there's just something about them. Maybe it's that the plastic feels to soft and they tend to look bent. One of mine looks like it would constantly be shooting Stridor in the head, which is definitely not an effective offensive technique. 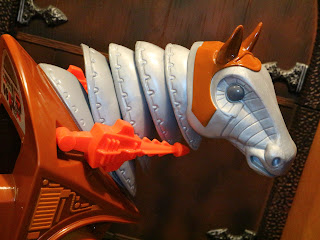 * One of the coolest new articulation features on Stridor is his neck. It's actually a segmented, armored neck with five separate balljoints. It looks great and it highly functional. Again, while the vintage Stridor toy was largely immobile, this guy is a fully articulated figure. This is a great design element! 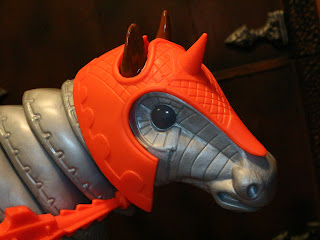 * Stridor includes a recreation of his vintage helmet, something that set the original figure apart from Nigt Stalker. It looks great with some nice design elements and a small spike on the front. 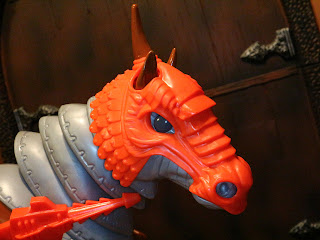 *  Similar to how Panthor received some new headgear, the Classics version of Night Stalker was given a new helmet which the vintage figure didn't have. Super7 recast this piece and red and now Strdior has it, too. It easily fits over Stridor's head to give him a more warlike appearance. The plate metal armor on it definitely has a bit of a medieval flare, something that stands out against the concept of a metal warhorse. It's those juxtapositions that make Masters of the Universe so much fun, isn't it? 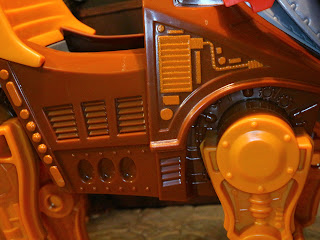 *  The exterior of Stridor is really nicely sculpted. He feels quite durable and looks like a formidable piece of equipment. I love the brown and amber color of his body and the various metallic paint application covering him. This is a really nice looking vehicle/ mount and it makes a great first impression. 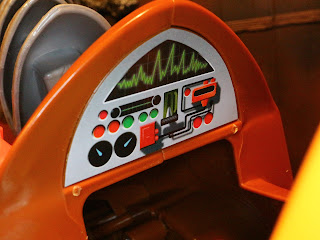 * I like the details on the view screen, but I really wish we had received some sculpted controls and details instead of this sticker. It's just a bit plain and kind of tacky for a figure like this to not have a sculpted element here. Take note that Stridor and Night Stalker do have different stickers. 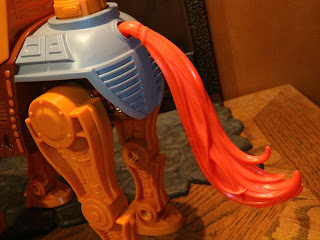 * Stridor not only has a long, flowing red tail, but it's also on a balljoint. 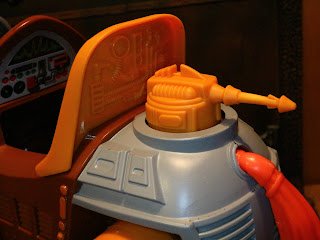 * Like Night Stalker, Stridor literally has a tail gun; you know, as in a turret mounted above his tail. I love this gun for some reason (I loved these on the vintage figure, too) and it looks great here. It rotates freely although it is missing the pant applications that Night Stalker had. 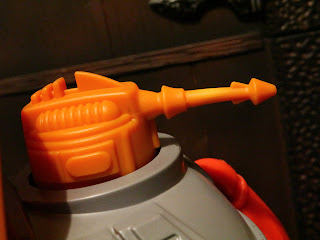 * Unfortunately, my tail gun was a bit warped right out of the package. It's not a huge deal but you can see the stress on the plastic of the barrel here. 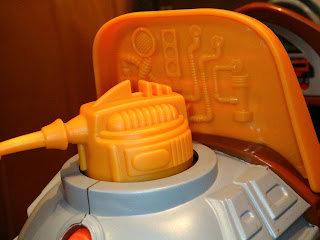 * The circuitry all over Stridor is cool, particularly the little doodads behind the saddle. Stridor is a great example of  Masters of the Universe's unique blend of medieval, barbarian fantasy, and sci-fi 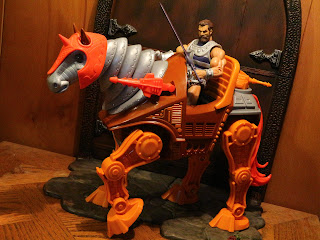 I do really like this Stridor and, for fans of the line, this is a pretty necessary piece. It seems like almost everyone who liked MOTU owned either Stridor or Night Stalker, didn't it? You gotta give Fisto a way to get around as the dude is just too cool to walk. I know it's been a few years and Super7 is a smaller company but they did charge $20 dollars more for Stridor than Mattel charged for Night Stalker. It doesn't feel like a terrible price due to the crazy size of this toy, plus you're getting two helmets instead of one. I'm content giving Stridor a Great rating. Even though he felt like an inevitable release, it's still a real thrill and a delight to have him.


This is the first toy of Stridor I've reviewed on here.

For more Masters of the Universe Classics toys from Super7 check out the following:
Granita
Hawke
Karg
Quakke