Action Figure Review: Buzz-Off #759 from POP! Television: Masters of the Universe by Funko 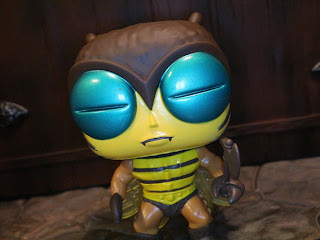 Today I'm checking out Buzz-Off, the first Masters of the Universe POP! Vinyl I've reviewed on the site and, it turns out, possibly the last one Funko releases. Strange things are going on with the Masters of the Universe license and Funko seems to be the first licensee affected. While there is no hard evidence yet, it seems that Mattel may be trying to fully get the MOTU license back in their control so they can renegotiate things before the tentative release of the film scheduled for sometime next year.  While there have been rumors that Mattel was upset over Funko's DC Primal Age line, Mattel trying to exercise more control over the license in preparation for the inevitable merchandising blitz of a movie makes more sense: Buzz-Off just kind of appeared as an ECCC and FYE exclusive with little fanfare from the company. Nothing new has been announced for the license and retailers are no longer able to make any new orders of MOTU Funko product. On the Funko forums where staff often interact, there has been nothing reassuring said about the line. Furthermore, other licensees such as Super7 and The Loyal Subjects have made comments insinuating that the future of the license may currently be up in the air for them as well. Hopefully this is just a temporarily issue and the companies who have been carrying the MOTU torch for quite a few years now can get back to releasing more cool stuff. Let's check out the heroic Adreenid warrior Buzz-Off after the break... 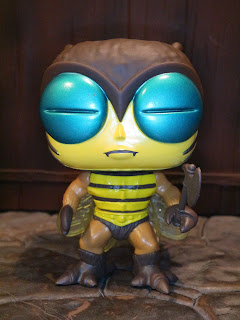 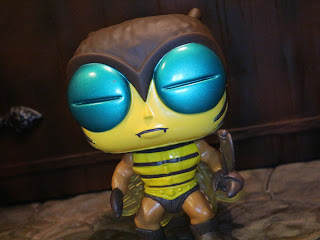 * The over-the-top proportions of the Masters of the Universe crew really make for some nice looking POP! vinyls. The MOTU crew are bulky, colorful, and full of attitude, a combination that blends oh so well with the POP! aesthetic. While the series lists this as being a TV based POP! I think it looks far more like the vintage toy of Buzz-Off. 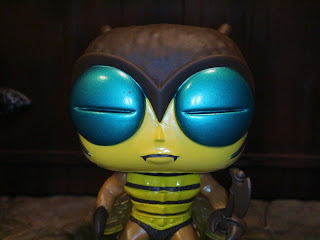 * Buzz-Off has a great face, doesn't he? He's kind of a weird looking bee guy who seems friendly enough. Those eyes are pretty awesome and make it tough to read his expression. Does Buzz-Off want to sting you or give you a high five? Interestingly, his eyes are very un-POP! That works here, though, as the large metallic eyes are a huge part of the character's look. 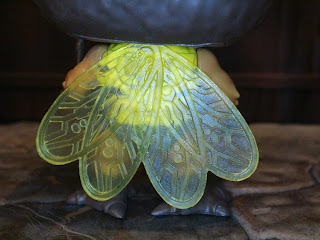 * The translucent wings look fantastic! They have a lot of detail sculpted into them and they definitely remind me of the wings on the toy. 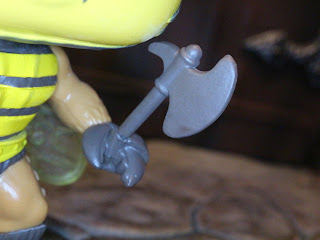 * Buzz-Off is wielding his trusty ax, the same as his vintage action figure. The ax was a color variant of the ax from the Castle Grayskull weapons rack (cast in brown instead of tan) and it looks pretty faithful to the vintage toy here. 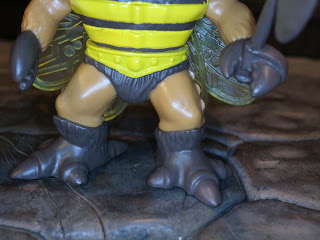 * I love the little details here such as Buzz-Off's feet, his standard furry trunks, and hos bee-stripd armor. 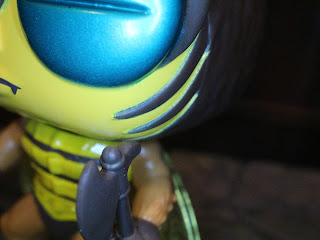 * The little stripes on Buzz-Off's head have some sloppy paint on the ends. It might look slight here but in person it is a bit more noticeable, oddly enough. 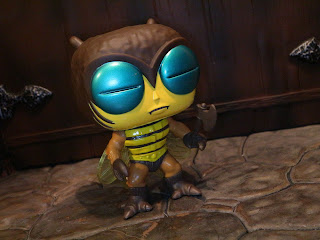 Buzz-Off is a very cool POP! vinyl that, unfortunately, is an exclusive like so many of the other MOTU POP! figures. I'm not sure Funko released another line where so many of the main characters were exclusives. For any other property I'd argue that it'd be doubtful that a film could come out without POP! vinyls to tie in with it but since Mattel makes toys themselves, maybe they're going to try to handle the merchandise themselves? If that's the case Buzz-Off is a Great last hurrah (although how the heck did Funko never get around to releasing a single Teela?). 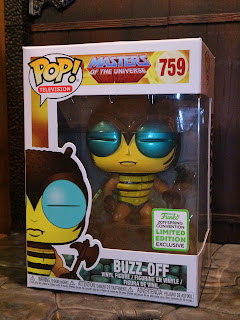 If you're looking for more Buzz-Off items, check out the following: The M.U.S.C.L.E. green Buzz-Off and series 1 Buzz-Off and the 200x styled Buzz-Off head from the Heads of Eternia pack.