Action Figure Review: Ram Man from Masters of the Universe ReAction by Super7 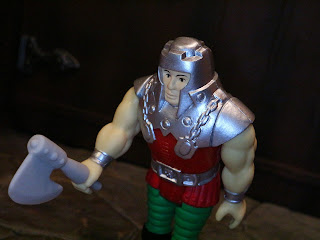 It's time for another review from the latest series of Masters of the Universe ReAction figures and this time it's another classic Heroic Warrior: Ram Man! Ram Man is absolutely one of my favorites. I mean, yeah, it's Masters of the Universe and my list of "favorites" probably makes up about 20 characters or something but Ram Man is definitely a top...5-7 for me. Ram Man was one of the first figures I reviewed back when I was actively writing at The Epic Review and, for years now, I've kept a vintage Ram Man on my desk at work. I just love the character although I prefer the depictions of Ram Man as a larger, oversized warrior rather than the smaller springy of the Filmation cartoon series. This ReAction styled figure definitely makes Ram Man look like a larger, beefier character who is both powerful and intimidating. Let's get started with this one after the break... 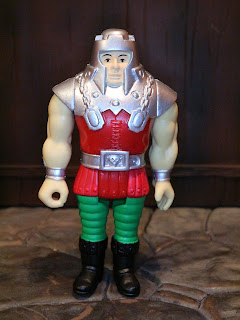 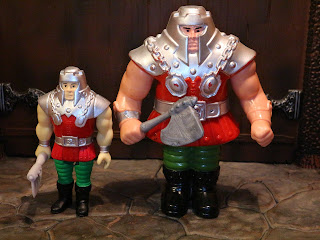 * On the left is the Super7 ReAction Ram Man while Mattel's vintage Ram Man is on the right. I just find it fun to check these out next to their vintage counterparts since the style of the Kenner styled figures is so different than the vintage MOTU aesthetic. The details are nearly identical between the two, however, which I'm a fan of. 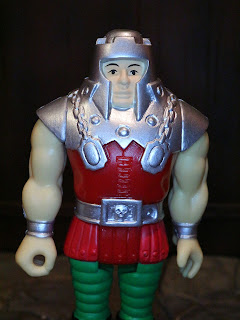 
* I love how big and brawny Ram Man looks! While he still has the look of a vintage Kenner action figure, Rammy is far bulkier and definitely looks like he can add some muscle to the already insanely muscular MOTU crew. The details of the vintage figure are faithfully carried over to this figure including the oddly segmented pants, the detailed tunic, and the wicked skull belt buckle. I love that belt buckle! 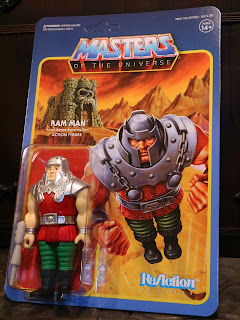 * The card art on most ReAction figures released by Super7 is beautiful and their Masters of the Universe line is no exception. Ram Man features a beautiful illustration of the character by Jason Edmiston. To preserve the card I actually made a slit in the top of the blister so I can slide the figure in and out. It work great and allows the figure to be displayed inside and outside of the card. I've got mine hanging on a metal pegboard similar to what you'd see in a retail store! 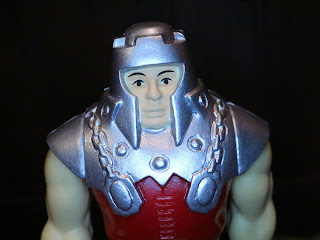 * While the vintage Ram Man looks like he might be squinting or furrowing his brow, the ReAction Ram Man has a more neutral, pleasant expression on his face. That might seem like a miss but I'm OK with it.The vintage Star Wars figures all had pretty neutral expressions so it kind of makes sense that Super7 would go in this direction. Expressive facial expressions were something that helped the early MOTU figures stand out from everything else on the market. 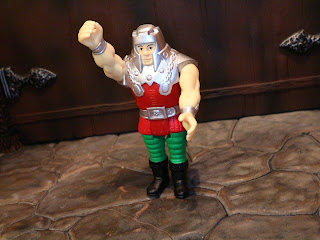 *  If you've ever picked up a retro figure like this, you probably know what to expect. Since his helmet and shoulder armor are one piece, he only has 4 points of articulation, though. Ram Man feels quite well made and sturdy and definitely of a better quality than some of the earlier ReAction figures that Funko put out. Super7 has been very consistent in the quality of their ReAction lines over the past couple of years. 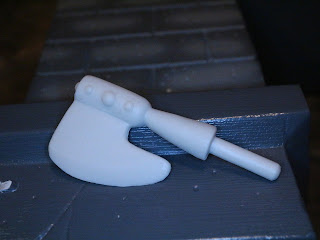 * I'm always a fan of Ram Man's enormous ax and Super7 delivers. It's more gray than silver but it's huge and looks like it is pretty wicked. 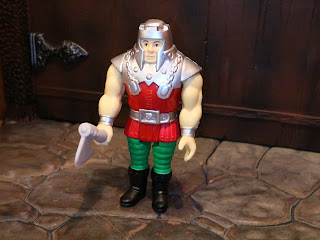 
If you're a Ram Man fan I've also reviewed the M.U.S.C.L.E. green Ram Man and the traditional pink Ram Man, as well as the MOTUC Ram Man.

For more Masters of the Universe ReAction figures from Super7, check out the following:
Evil-Lyn
Faker
Mekaneck
Orko