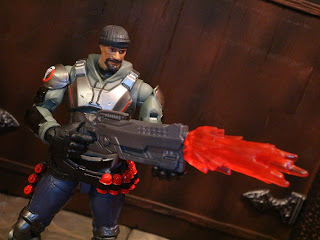 Today I'm checking out another figure from Hasbro's Overwatch Ultimates line and this time it's Reaper (Blackwatch Reyes). That's a rather oddly named figure, isn't it? I'm no Overwatch expert by any means (I have not actually even played the game) but a brief glimpse through the Overwatch Wiki gave me some information to help make sense of things. While Reaper is one of the most recognizable characters in the game, this isn't how he usually dresses. While most of the alternate skins for characters are simple palette swaps, sometimes they offer up a truly unique appearance. Reaper's real name is Gabriel Reyes and before he was a mercenary and a terrorist, he was the commander of a US Army group called Blackwatch, were he served alongside of Jack Morrison/ Soldier 76. At some point I'm sure we'll get Reyes in his Reaper outfit but to kick things off Hasbro's offering up this "prequel" version of Reyes that is one of his Legendary skins. I have to admit that the story and character connections in this game are making me more interested in playing this than anything I've heard about the game itself, which doesn't appear to be very story based. Are there novels or comics that anyone would recommend? For now, let's check out the Blackwatch version of Reyes/ Reaper after the break... 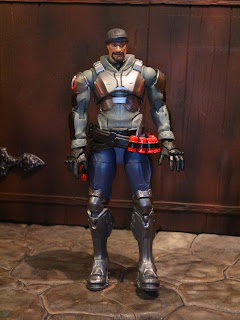 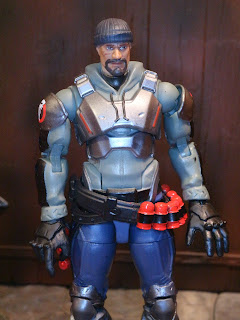 
* Again, not having played Overwatch I have no connection to the property. It's the quality of Hasbro's action figures and the unique, stylized character designs that has pulled me in here. I really like the look of Reyes in his simple tactical gear. It definitely has somewhat of a special forces look to it, but it also looks rather casual. Definitely something an "off the books" operative might wear. He kind of reminds me of a G.I. Joe: A Real American Hero character. There's a lot of sculpted detail such as the drawstrings on Reyes' hoodie, some random dents and marks in his chest armor, and the nicely applied insignias on his shoulders. 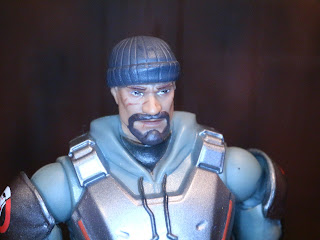 * The headsculpt is quite good. While Reyes is supposed to be 58 at the time the game takes place, this figure is based on his appearance during an earlier time in his life. He still looks like a hard man who has seen a lot, though, and he's got the scars to prove it. He definitely looks like he's sustained some damage. I also like the toboggan. For some reason, this guy really makes me want Hasbro to make a 6 inch Shipwreck figure based on the early 2000s era figures. 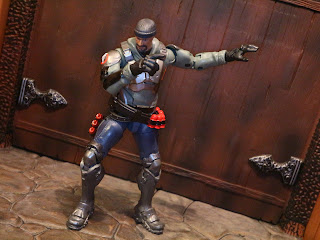 * The articulation here is impressive. Seriously, this guy can move. The torso works really well and allows for a wide range of body motion. It's interesting that Hasbro put the hinge on the lower torso and the balljoint on the upper torso, but it works here. Heck, the lateral pectoral hinges are probably worth a positive in and of themselves. They're excellent for allowing Reyes to hold his weapons properly. 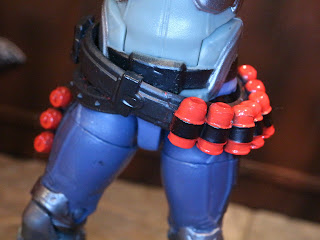 * Reyes' belt is loaded with extra incendiary shells, presumably for his Hellfire shotguns. 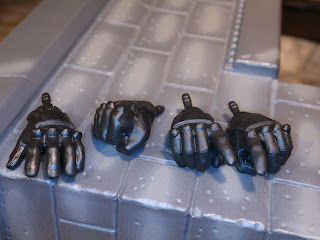 * Reyes comes with four alternate hands: Two pistol grips, one open palm (left), and a fist (right). The hands swap in and out easily and definitely give you a few nice options for displaying the figure. 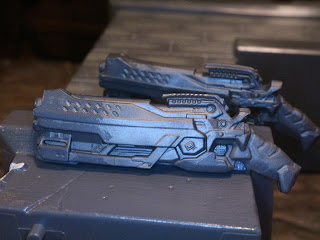 * Reyes comes with two Hellfire shotguns. These are pretty wicked looking (although they absolutely do look like Nerf blasters, which can be pretty wicked looking) and they fit in the figure's hands quite well. He can do dual wielding poses but Reyes can also handle one weapon by itself beautifully. 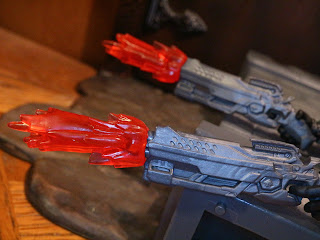 * To make things even more fun Reyes comes with two blast effects for the ends of the shotguns. They're molded in a somewhat pliable translucent plastic and they easily plug into the barrels of the weapons to give off a cool effect. 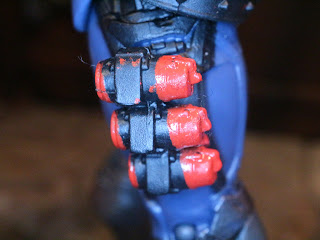 
* Overall the paintwork is clean but Reyes does have a bit of slop, particularly on these grenades on his right hip. 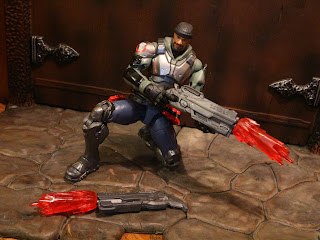 Reaper (Blackwatch Reyes) is a very, very cool figure. He's well articulated, well accessorized, looks cool, and sturdy as all get out.I have no idea how popular this particular "skin" is for Reaper but Hasbro had to have some reason they opted to go with this look in series 1. Whether or not you're an Overwatch fan, this is a really fun toy. He makes a cool random soldier or henchman for nearly any toyline. I hope collectors are paying attention to these as I'd love to see Hasbro keep cranking these guys out. They're just insanely fun and they all feel very, very unique. Reaper (Blackwatch Reyes) is a Great and a 1/2 entry in the Overwatch Ultimates line.


This is the first figure of Reaper I've reviewed. For more Overwatch Ultimates reviews check out the following:
Ana (Shrike) and Soldier: 76
Sombra