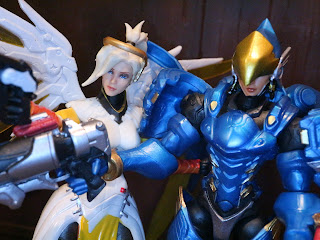 It's been a few days so it's time for another review from Hasbro's Overwatch Ultimates toyline. As I've stated on all of these reviews, I've never played Overwatch. Prior to picking these figures up I wasn't even familiar with the story. Heck, other than recognizing a few of the main characters, I was completely ignorant of the property. Cool action figures is enough to get me excited, though, and now I'm starting to pick up on some of the lore. Today I'm checking out a very cool two-pack that features two of the more popular characters from the game: Mercy and Pharah. Mercy is the code name for Dr. Angela Ziegler, a 37 year old Swiss field medic and first responder from Zurich while Pharah is the code name for Fareeha Amari, a 32 year old security chief from Giza, Egypt. While the characters in Overwatch have multiple different "skins" that showcase different appearances for the figures, Mercy and Pharah come in their standard looks. Let's take a look at this two-pack after the break... 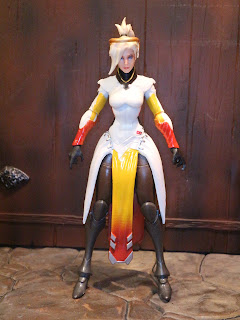 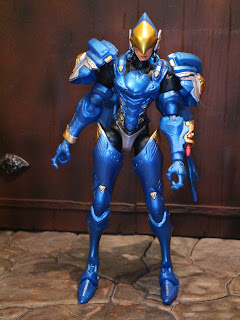 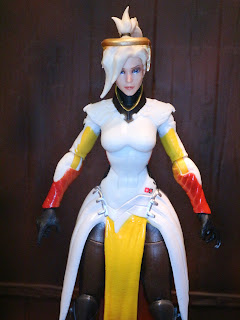 
* I love how unique every character in this series looks and Mercy is another very interesting looking character. Her Valkyrie Suit definitely has an angelic appearance, which meshes well with her high-tech medic appearance. The color scheme is really quite lovely. While there's lots of white and black, there's also yellow, red, and orange to give the figure a warmer tone. Since Hasbro is using unique sculpts for the figures in this series the texturing is unique all over as well, showcasing different textures in different places. 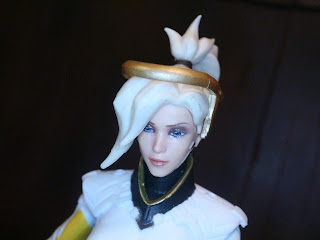 * Mercy is quite gorgeous with stylish blonde hair and a halo-like hairpiece. The sculpt is excellent and matches the stylized looks of the in-game character. 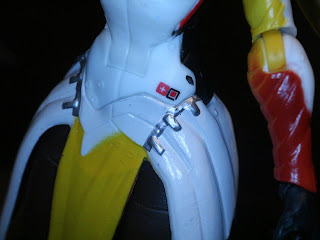 * Since she's Swiss and a medic, Mercy's uniform has these cool little symbols. The first is the Swiss flag while the second is some sort of symbol. Is this something that Overwatch fans recognize? A medical agency of some sort? They're neat little stencils, for sure. 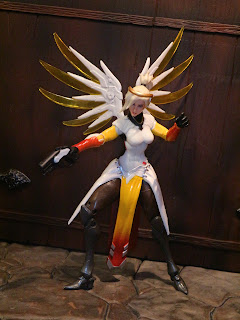 * For the most part the articulation is excellent. It might not be as good as Star Wars: The Black Series or some Marvel Legends figures yet but it's definitely in the same league. These are high quality, well articulated figures that feel sturdy and made for play and display. The range of motion could be improved in a few places but these are streets ahead of what most other mass market companies are putting out.Despite having skirt pieces hanging down, Mercy's leg articulation is pretty solid. 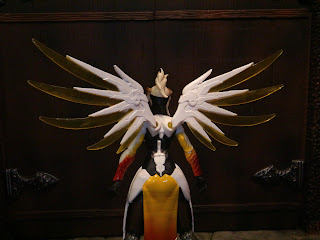 * Mercy is able to fly thanks to her Valkyrie suit. The armored wings look cool, especially the translucent yellow tips, and they can move around thanks to the balljoints as the base. 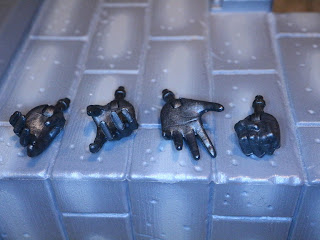 * Mercy comes with four interchangeable hands: There is a pair of pistol grips, a right hand in a fist, and a left hand with outstretched fingers, perhaps posed in a healing gesture. It's a nice assortment to allow Mercy to hold all of her weapons while giving her some more expressive poses, too. 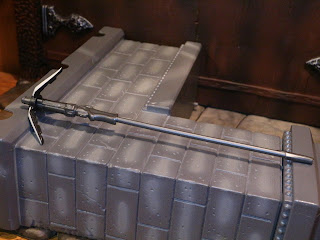 * Mercy is fairly laden with accessories. First up is her Caduceus staff, a device that allows Mercy to either heal her teammates or boost the amount of damage they cause. It's a cool looking staff with a swiveling tip on the top. 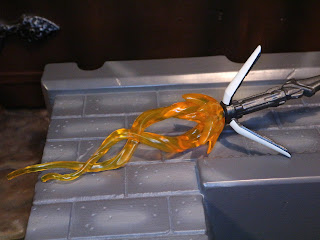 * To really make the Caduceus Staff even cooler you can attach this energy beam to the top. Apparently these beams can tether to an ally to boost their health or damage output. I love the translucent energy effects Hasbro is including with the figures in this series. It just makes these figures even more fun and dynamic looking. 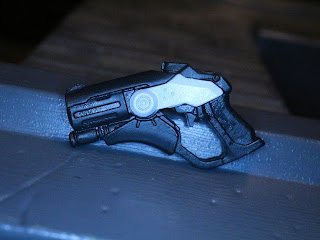 * To protect herself Mercy comes with a Caduceus Blaster, a small pistol that resembles a Nerf blaster. It's a cool looking sidearm that even has a few paint applications on it. 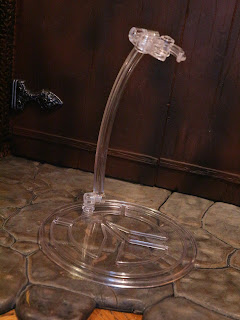 * The two-pack comes with a translucent flight stand with the Overwatch symbol on it. Since both Mercy and Pharah can fly it could really go with either figure in the pack, although Mercy fits on it a bit better. It's cool to see a mainstream company like Hasbro offering many of the accessories and features that typically come with higher end specialty market lines. The display arm is detachable from the base via a peg. 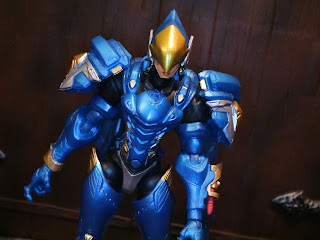 * Pharah is an incredible looking character. I love her armor. It's fantastic and I'm always, always partial to metallic blue. It has a very cool Egyptian vibe to it which connects with both Pharah's Egyptian nationality and the Eye of Horus tattoo she sports. The detailing is incredible here and shows off the various details on every centimeter of the sculpt. 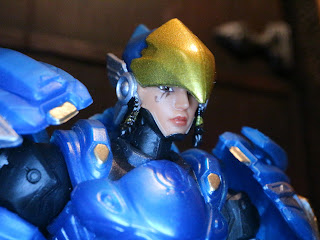 * While I wish Pharah came with an unhelmeted head, you can see her face underneath the bird-like helmet. It's a great sculpt and the work on the tattoo and eyes is very clean, despite being nearly hidden underneath the visor. 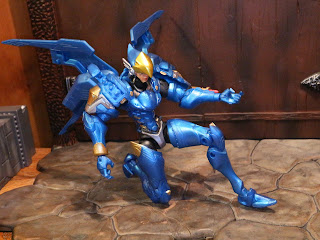 * Pharah's articulation is mostly similar to the other female figures in the line although she has different articulation in the arms. Rather than swivel/hinge elbows Pharah has swivel biceps and hinged elbows. She also has large balljointed pauldrons that can be posed alongside of her arms to create more natural poses. 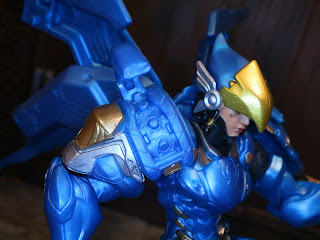 * There are hinged panels on Pharah's pauldrons that can lift up to reveal missile launchers. Apparently in-game these can be used to launch a barrage of missiles at opponents. I love these cool little missile launchers! There's no paint underneath but the sculpting definitely proves what these are meant to be. 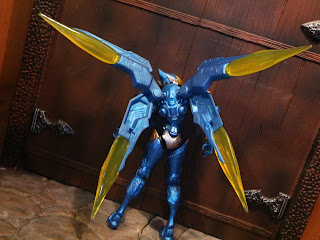 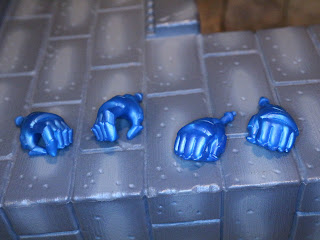 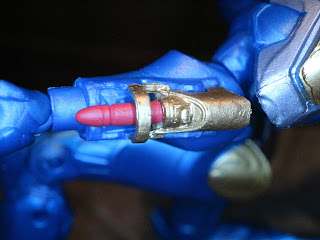 * On Pharah's right forearm is a small missile launcher with a red concussion missile. Apparently it just knocks enemies around rather than dealing damage to them. It's a darn cool looking weapon and, for some reason, it reminds me of the missile on the vintage Boba Fett's jetpack. 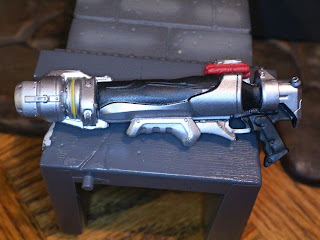 * Pharah's primary weapon is a very cool rocket launcher. It's a fairly large weapon with lots of paint applications. 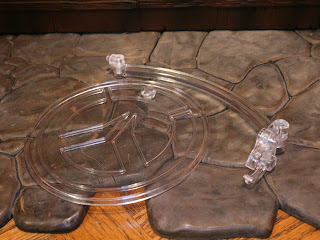 
* I actually had to exchange my first set because the flight stand was broken. Well, not broken per say, but the peg hole on the base was molded improperly, allowing no way for the flight arm to attach to the base. 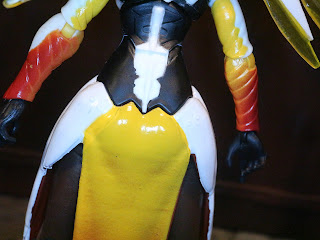 * Mercy's skirt has some messy paint applications. Maybe it's because it's made from a rubbery material which causes the paint to run a bit more? I don't know, but I do now there's a bit of slop here. 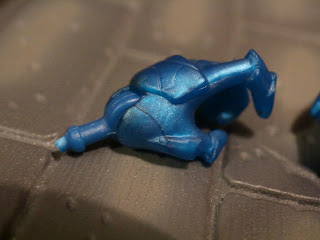 * The wrist pegs on both figures in the set are very small and can be a paint to swap out the first few times. With a little heat or just some constant, even pressure, they should come off just fine. Just exercise a little caution and you'll be alright. 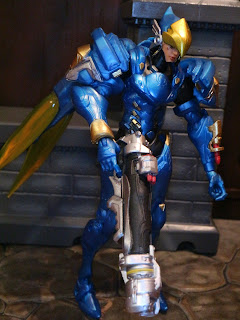 * Pharah's rocket launcher is incredibly cool. Sadly, there's no way to have her hold it effectively. I really wish she had double jointed elbows so she could take a decent firing pose. 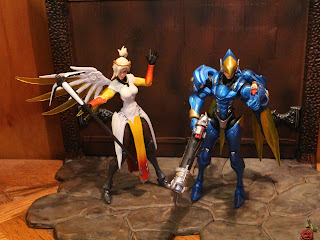 Despite a couple flaws with Pharah's design, overall this is a Great and a 1/2 set with a lot to love. Plentiful accessories, cool characters, and unique sculpting help these to really standout on your shelf. Even for someone who isn't an Overwatch fan there is a lot to love about this set. Mercy edges Pharah out a bit as the better figure but they are still both pretty great toys. Hopefully for series 2 Hasbro tweaks the elbow articulation on everyone a bit. If that's the case this could be a line truly worth collecting for anyone who digs cool toys.

These are the first figures of Mercy and Pharah I've reviewed. For more Overwatch Ultimates reviews check out the following:
Ana (Shrike) and Soldier: 76
Reaper (Blackwatch Reyes)
Sombra