Action Figure Review: Teela from Masters of the Universe by Super7 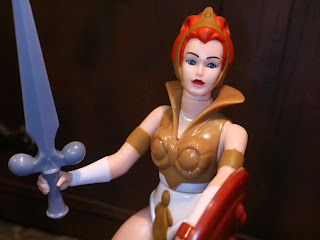 Today I'm reviewing the fourth and final figure in the second series of Super7's Filmation inspired, vintage styled Masters of the Universe figures: Teela! Of the four figures in series 2, Teela was probably the one I was most looking forward to. While Robot He-Man is technically a new character and Man-At-Arms with his mustache was a long anticipated addition to 5.5 inch MOTU collecting, I really was looking forward to a Filmation inspired Teela. Sadly, Teela turned out to be a fairly disappointing figure. She's not terrible but she definitely has some flaws that hold her back from being recommended to all but the most enthusiastic MOTU collectors. Let's check her out after the break... 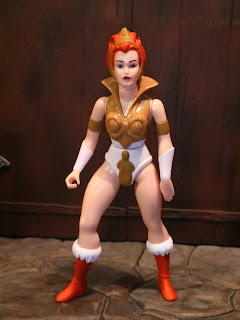 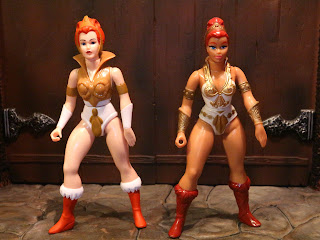 * On the left is Super7's new Teela figure while on the right is my original vintage Teela figure. Teela may have been the first female action figure I owned (it was either her, Zarana, or Jinx). Anyways, while the figures have similar poses they are incredibly different. It's interesting to see them side by side like this as it shows off the difference in the styles quite nicely. 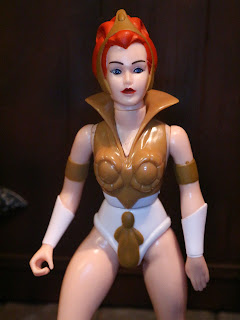 
* I really do like the look of this figure. If Mattel had based their Masters of the Universe off of the Filmation animated show (instead of the other way around), this is what we would have probably got back in the day. It's a mixture of the animated look and the vintage toy design. Teela's outfit is simpler with fewer details on her unitard and armor and a massive popped collar. She definitely looks just like the Filmation art and should be easily recognizable to anyone who has ever seen the cartoon. 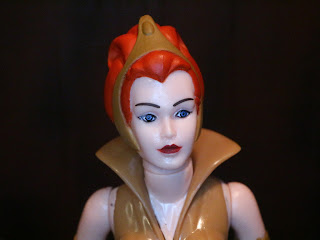 * I really like the headsculpt. Super7 nicely captured Teela's appearance, particularly her hair and lips. I like this headsculpt better than the vintage one, which is really saying something. I like both of them, don't get me wrong, but this is one of the few I believe is actually an improvement. It has a lot more character to it. 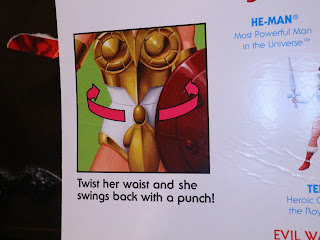 * All of Super7's neo-vintage figures feature spring loaded swivel waists. I still have no idea what sorcery causes these figures to be able to punch like this but it works pretty well. It's fun to have a genuine action feature in a MOTU figure again, allowing Teela to punch and slash her way through Skeletor's minions with just a twist of her waist. 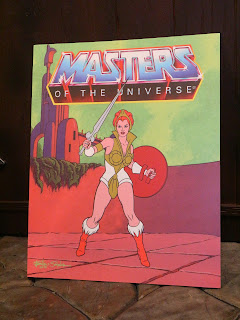 * I still like the decision to include art cards with these figures. They kind of mimic the look of the minicomics in the vintage packaging though they're really just a simple cardstock art print. On the front is a really cool image of Teela from Emiliano Santalucia while the back features three images of the evolution of the character from toy to cartoon star. 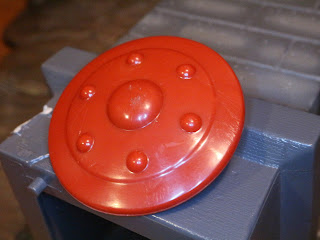 * Teela comes with a larger shield than the vintage figure. It's less detailed, too, though it still has a few rivets on the front. The color is pretty similar to the weapons from the vintage toy, however. 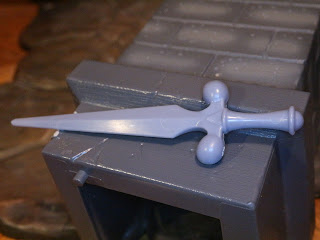 * Teela also includes a sword. It's a cool design and is legitimately pointy. Seriously, I'm pretty sure you could stab someone with this. Seriously, it's like an officially licensed MOTU shiv. 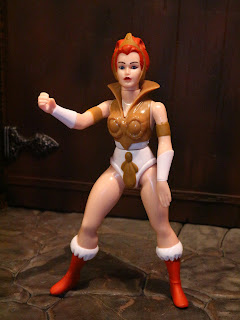 * I'm really not liking two things about the pose of the figure. First, the legs are really posed oddly in such a way that Teela has to take a very wide stance to look like she's standing naturally. The "action" pose of the sculpt just doesn't work for me here. Second, while this Teela retains the spell casting left hand of the vintage figure it feels largely unwarranted here. The Filmation Teela doesn't cast spells. The left arm should have been better suited for using the included weapons. 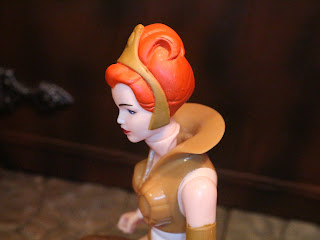 * Take a close look at Teela's neck: It turns out that the head isn't fully glued down. Yes, the head and upper chest is glued into the torso, but my figure has no glue on the bottom of her head. At first I thought the figure had a hinged neck or something but then  realized that, yes, this is a simple QC error. 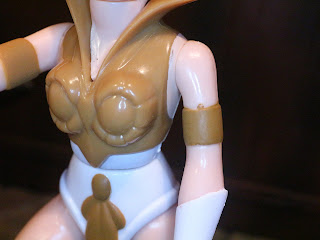 * Teela has a few spots of messy paintwork, one of which is some gold paint slop on her bicep cuff. 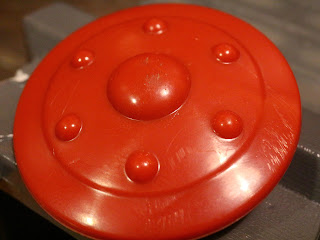 * I like Teela's shield but look closely and you'll see some odd scuffs and paint smudges on this shield. What the heck? This was brand new in the package with the accessories still sealed in a little plastic bag. Why does this like like it belonged to a kid who sat around banging their toys together over and over. 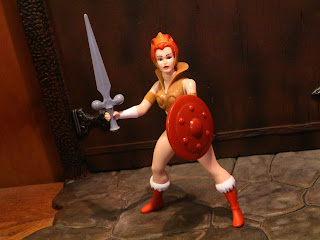 While I like the overall look of the figure and the headsculpt, there are a lot of problems with it that really bring it down. The biggest one to me is the non-glued head, although the scuffed shield and the weird leg positioning also dampened my enthusiasm for Teela. She really is a pretty Eh and a 1/2 figure. If you're a huge fan of this line, or of MOTU in general, you'll probably still want her. Otherwise, just skip this one. Overall series 2 was pretty good but Teela just has too many quality control errors.


If you're a Teela fan, I've reviewed a couple of Teela toys such as the M.U.S.C.L.E. green Teela and the standard M.O.T.U.S.C.L.E Teela, the Mega Construx Teela from the Battle for Eternia Collection, the ReAction Teela (Shiva), and Super7's Ultimate Teela.


For more Masters of the Universe figures by Super7 check out the following:
Beast Man
Man-At-Arms
Possessed Skeletor
Robot He-Man
Posted by Barbecue17 at 6/23/2019