Action Figure Review: Battle Cat from Masters of the Universe Action Vinyls by The Loyal Subjects 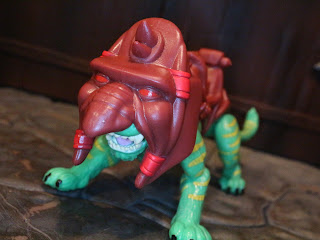 I have quite a few of the Masters of the Universe Action Vinyls from The Loyal Subjects, but you know what? This is the first one I've reviewed on the site! Just as the cases of the second series of figures is starting to hit store shelves (Hot Topic had an exclusive case of series 2 at the end of 2018), cases of just Battle Cat and Panthor are also starting to arrive. The Loyal Subjects has evolved on their approach to blind boxes and while Series 2 has a mixture of blind boxed and regularly packaged figures, Battle Cat and Panthor are packaged in traditional window boxes. Pretty cool, right? Cringer is easily one of my favorite Masters of the Universe characters so that means Battle Cat gets pretty high marks in my book, too. Let's check out this very cool miniature Battle Cat after the break... 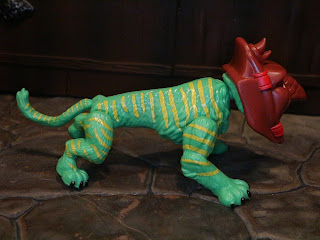 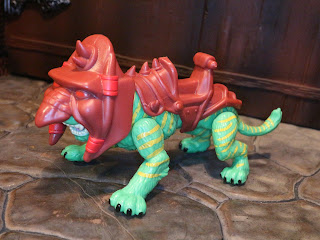 * The Loyal Subjects' Action Vinyls are 3 1/4ths inch scaled stylized action figures and Battle Cat is designed with the same stylized aesthetic. He's a very cool, nicely painted rendition of Battle Cat. He almost feels like a miniaturized version of the Masters of the Universe Classics Battle Cat. I love how bright and colorful Battle Cat is! 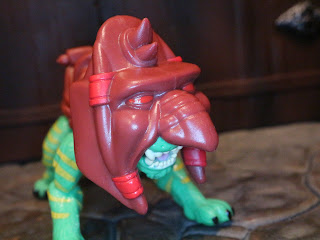 * The head sculpt shows off Battle Cats wicked armored helmet and his ferocious jaws. While I would have loved to have a removable helmet and a hinged jaw, the detail here is impressive. I'm especially fond of the red highlights on the helmet; it brings out some detail and helps to give it a bit more visual flair. 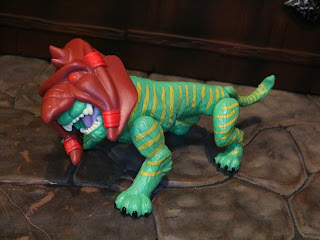 * Battle Cat has six ball joints and feels like a sturdy toy. If these were a bit less expensive and easier to find, perhaps sold in standard toy aisles,  I imagine that kids would be all over these. They're great fun! Battle Cat isn't as poseable as the standard figures, probably due to his build, but he is fun to play around. Due to all of his joints being true balljoints, if a limb falls off it is quite easy to pop it back on again. 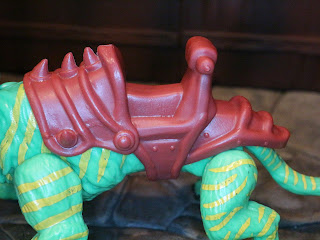 * The removable saddle is pretty nice looking. It stays on well, has a great sculpt, and can easily hold other Action Vinyls on it. 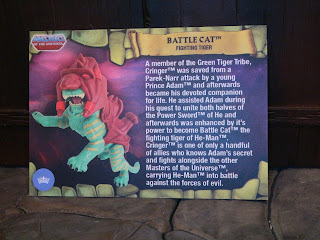 * To add a bit more personalization and fun to each release The Loyal Subjects adds a bio card. It's a cool little extra that uses the MOTUC bio for Battle Cat to here. 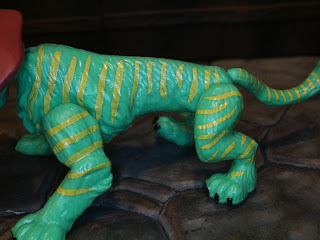 
* Battle Cat is skinny. Too skinny, really. I wish he looked a but more muscular. I'd be OK if Cringer were this slim but Battle Cat should definitely appear muscular and imposing. 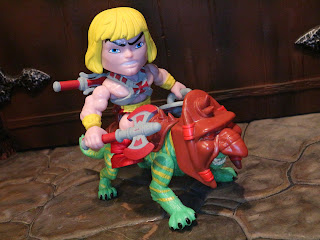 * Compare the size of an Action Vinyls He-Man with Battle Cat. Battle Cat does seem rather undersized, doesn't he? Considering these guys were sold separately in their own window boxes (not forced into the same boxes as everyone else, their size shouldn't have mattered much and they could have been made a bit larger. You know what, though? They really scale well with the Mega Construx figures. 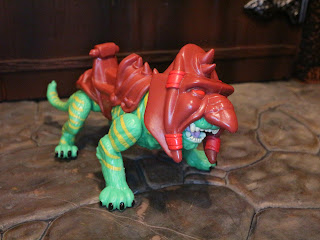 I was really excited about this release and, while I like Battle Cat, I do think he could have been better. A larger figure with perhaps a hinged jaw or a removable helmet would have take this guy to the next level. Still, as a Masters of the Universe collector I'll never turn down a Battle Cat. He's a Good figure that fans of the character may want to check out despite it's flaws. Remember that Hot Topic has some flocked versions of both Battle Cat and Panthor, so if you want a flocked Battle Cat you know where to go!

I've only reviewed a couple other Battle Cat/ Cringer toys: The M.U.S.C.L.E. Battle Cat and the VYNL Prince Adam and Cringer.
Posted by Barbecue17 at 6/06/2019