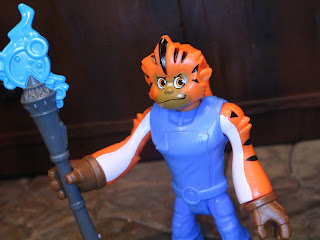 Today I'm checking out the fifth figure in series 12 of the Imaginext Collectible figures and this time it's something pretty unusual: A Tiger Monkey. That's what I've seen it called, anyways. Fisher-Price doesn't really give these figures official names, so I'm just using the designation I've seen most commonly online. Series 12 hasn't been the most exciting series for me and while I wasn't initially looking forward to this figure that much, having him in hand has changed my opinion greatly. He's excellent and really unique. First things first, though: What the heck is this guy supposed to be? He definitely has the fur color and pattern of a tiger, but he's clearly simian in nature, right? And is he a mechanic? I don't know why, maybe I'm thinking that he is because of the gloves and the blue suit. It makes me think of some sort of a space mechanic. But is that some sort of magic staff he's wielding? Perhaps he's a street mage of sorts. Anyways, I gotta give Fisher-Price credit for the fact that this guy is interesting. Series 12 has been rather basic overall but this guy is just a ton of fun. I keep getting a ThunderCats, Legends of Chima, and Captain Simian & the Space Monkeys vibe from this fella. Let's check him out in more detail after the break... 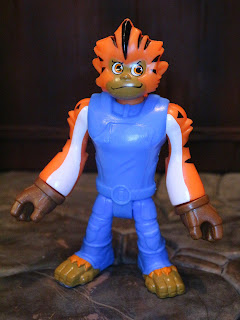 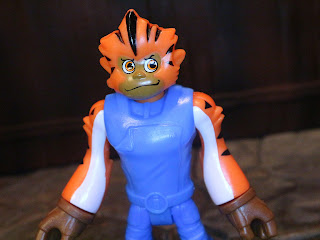 * Here's a quick look at the greatness of Monkey Tiger. Who is he? Where did he come from? Who knows? He's just really, really cool looking. I love the orange and black stripes and the simple blue outfit. Again, it makes me think of a mechanic's outfit and something futuristic, but I;m not sure why. Still, this guy has a lot more pizazz than most other series 12 figures. 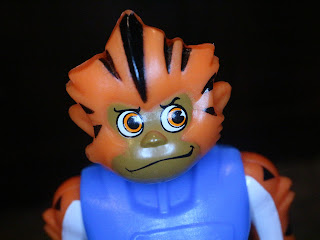 * The headsculpt is cool and looking at it gives you a nice glimpse at the simian nature of the figure. He definitely looks like a monkey of some sort. He has a cool expression with eyes darting to the left and a crooked wry smile. 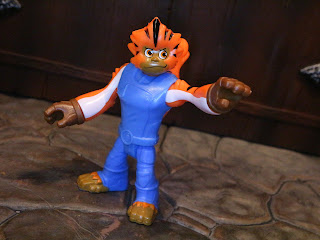 * The Monkey Tiger has the same articulation as most other figures in the line. They're great fun to play around with and make great toys for younger kids, too. My 5 year old really likes them as they stand up easily, yet you can still move them around a bit and get them into some fun poses. They're very durable. 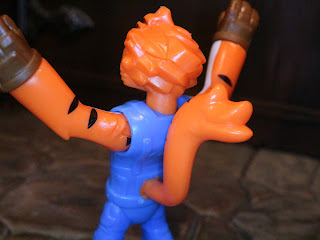 * Not only does Monkey Tiger have cool stripes on his arms but he also has a tail. It's striped and looks rather bushy. Is that right for a monkey tail? Who knows? It's very cool, though, and pops right out of the back of his suit. 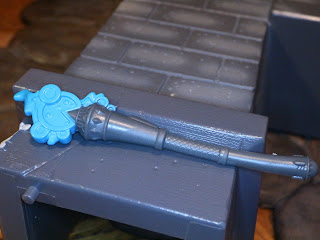 * The Monkey Tiger comes with a really cool staff. Without the blue part on top I'd think it was a weapon of some sort, maybe a mace or staff. The blue energy effect looks quite cool but it seems rather too "organized" to be a random energy effect. It seems more like a magical staff or scepter. What's the purpose? I'd really be curious to hear about the design process of this toy! 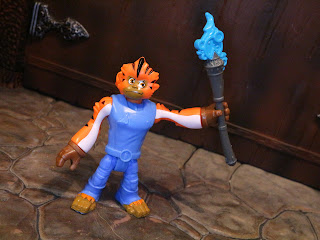 While he's kind of an enigma, the Monkey Tiger is really the coolest figure in series 12. The Adventure People Clawtron robot and the Robot from "Big" are cool figures, too, but they don't edge out the Money Tiger. Part monkey. Part tiger. Part mechanic. Part street mage. Part ThunderCat. Monkey Tiger is all things to all people and he's definitely the figure from series 12 I'd most enthusiastically recommend. Pair him with the Series 4 Space Gorilla and you've got a pretty cool. pair. Maybe we'll get more of this interesting crew in a future series. Come on Series 13!

This is the first figure of Monkey Tiger I've ever reviewed. For more Imaginext figures check out the following: