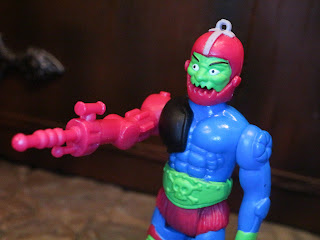 Last weekend I had the chance to go to HeroesCon in Charlotte, NC and  ended up with some pretty cool stuff. One item I picked up was this incredible Masters of the Universe ReAction Trap Jaw from Super7's blind boxed assortment. Trap Jaw is one of the four characters in the villain blind boxes and he's available in two flavors: Cartoon Colors and Metallic. A vendor actually had these available opened and labeled so I scooped up the Cartoon Colors version of this evil menace. Oddly enough, I don't actually own a carded ReAction Trap Jaw so picking one up seemed like a pretty good idea. It turns out that Trap Jaw is actually one of the cooler figures in the series as he not only really looks like his Filmation counterpart but he has a working action feature as well. Let's check out Trap Jaw after the break... 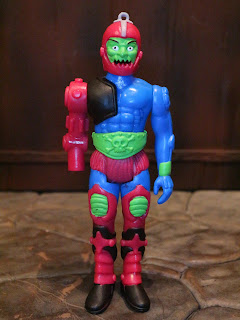 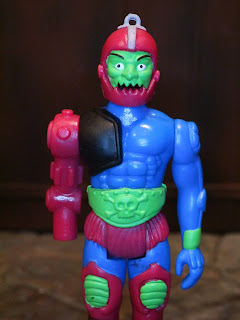 * This version of Trap Jaw features the same sculpt as the other ReAction Trap Jaw figures but his paint job is more vibrant, featuring the color scheme from the Filmation cartoon. I love the magenta used here on Trap Jaw's arm, boots, and helmet. He's a very nicely sculpted figure with a darn cool belt and lots of unique parts. Honestly, I'm not sure he shares any parts with anyone else in the line yet released (other than the other Trap Jaw figures). He seems like a completely unique sculpt 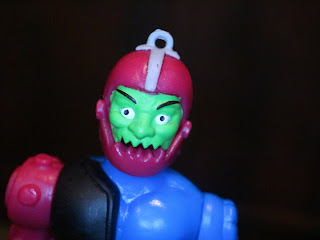 * The headsculpt is good. The colors are spot on, the jaw looks fearsome (I wish it moved!), and the eyes look crazy! Trap Jaw also has the metal loop on his helmet which he can use to slide down cables. What an odd design, huh? Seems like a surefire way to either lose your helmet or break your own neck. Don't try sliding down a cable via a hole in your helmet. 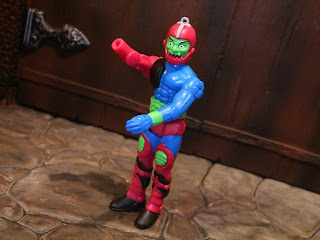 * If you've ever picked up a faux-retro figure like this then you know what to expect: 5 points of articulation, all swivel joints. Trap Jaw feels quite well made and sturdy. Thanks to the ability to swap out the devices on Trap Jaw's right arm, you effectively have a swivel joint for his right wrist, too. 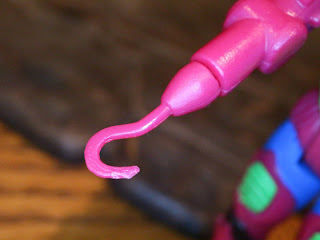 * Trap Jaw has three alternate weapons for his mechanical right arm. First up is the iconic hook hand. This is typically what I first thing about for the character. It's a simple magenta claw but it looks great and it swaps out quite easily. 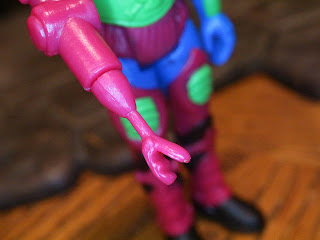 * My least favorite Trap Jaw hand is the grabber hand. It's a nice accessory and I'm glad it is included, but it's just not the most exciting. Useful from time to time, maybe, but not terribly exciting. 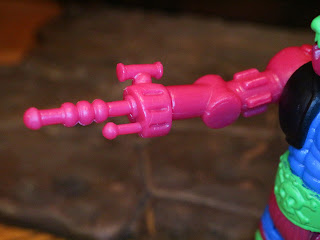 * Last up is my personal favorite: The laser cannon! I love he design of Trap Jaw's vintage laser cannon arm so it's nice to see that Super7 did a great job translating it into this style. 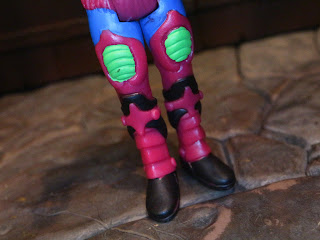 * Trap Jaw's has a great color scheme but there are definitely some messy paint spots on him. Some aren't too noticeable in person but others, particularly some rough work on his knee pads and boots, definitely stick out. 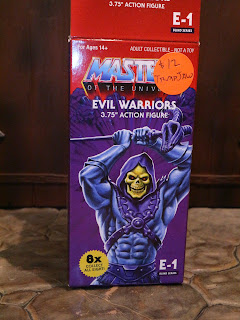 *  I really, really don't like the whole trend towards releasing blind bagged/ blind boxed items. Can someone explain to me the appeal of blind boxing  a $10 dollar item like this targeted towards collectors? Why can't I just buy all of the figures individually, as I very well might if I could buy them like nearly every other figure released.I'm glad someone was selling them loose so I knew what I was grabbing. 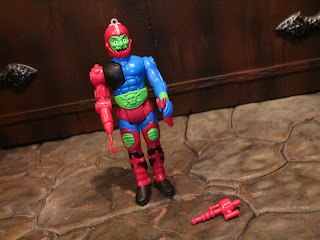 Trap Jaw is definitely one of my favorite Masters of the Universe ReAction figures. He has a great Filmation accurate color scheme, an excellent sculpt, and the ability to swap out the weapons on his right hand. If you run across this guy in a case or find a way to purchase this exact figure you shouldn't be disappointed. Trap Jaw is nearly as much fun as the vintage version of the character. I do miss the opening jaw, but the overall coolness here makes up for everything. He's a Great and a 1/2 MOTU ReAction figure!