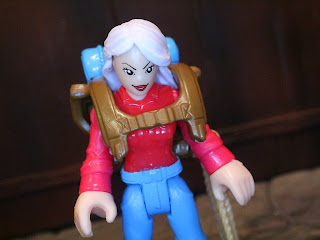 Last month I reviewed the first three figures from series 12 of the Imaginext Collectible Figures line and now I'm going to be wrapping things up with the final three figures. Today I'm checking out the lone female figure in series 12, the very clumsily named Female Backpacker Camper. Yeah, I'm not really sure where these names come from. I think they're how the figures are listed in retailer inventory systems or something. Unlike a lot of other blindbagged lines the Imaginext Collectible Figures are not truly blindbagged, as the foil packaging has a unique number stamped on it for each figure. Series 12 feature a few figures with a lot of reuse and one of those is the Female Backpacker Camper, which I'm going to just refer to as the Backpacker. I'm pretty sure she's made up of parts we've seen before and I know that her backpack has been features in other Imaginext lines such as Jurassic Park, the desert adventure line, and even the DC Super Friends line. Still, I was kind of excited about this figure as she fits in well with the adventurer line (which my daughter loves) and kind of looks like a gender-swapped Race Bannon from Jonny Quest. It turns out that this figure is kind of disappointing, so check her out along with me after the break... 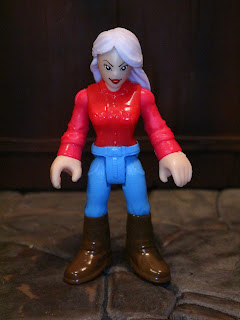 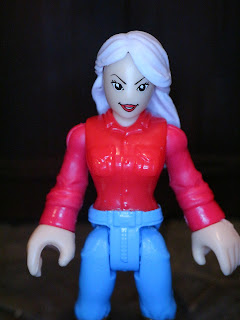 
* While she's a fairly simple figure I do like the general concept of the figure. The Female Backpacker Camper is a simple "regular" person figure clad in a red longsleeve button-up shirt and blue jeans. Maybe a little basic but that's ok; I think she fits in well with the adventure themed line. Some people also think she's based off of Abigail Arcane Holland from DC Comics. Interesting thought, so she'd pair well with the Swamp Thing figure. Add a few extra accessories and you can do a lot with her. 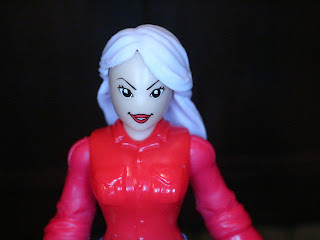 * I like the headsculpt and the paintwork for the eyes and mouth. There's a lot of character here, particularly due to the painted on expression and the white hair. She seems like a fun character no matter who you use her as. 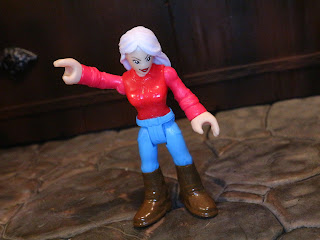 * I'm always happy with the quality and the articulation on these little figures. While they're only about 2 7/8ths inches, they remind me a lot of some of the various toylines of the 1980s and 1990s due to the random character selection, the durability, and the accessories. 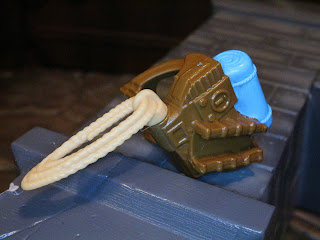 * This backpack isn't new to this figure, as I mentioned above, but it's still a cool accessory. Not only is a rugged backpack always a neat extra but the fact that this one has a sleeping bag, a coil of rope, and clip for storing an extra item. 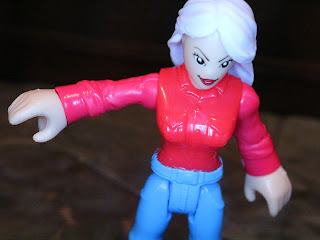 * We're already at the negatives, huh? Yup. This figure is definitely lacking in the cool features area and, unfortunately, there are lots of faults with it. First up are the sleeves: They don't match the shirt. You often find colors not matching on toys like this but the Backpacker's sleeves and shirt really clash. 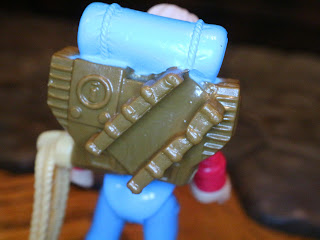 * Notice anything missing? Yes, the Backpacker comes with a backpack that has a clip for an extra item but there's nothing to put there. Nothing. I remember when these figures used to seem more well thought out but this last series has felt somewhat haphazard. Having a holster, sheathe, or a clip with no accessory to go in it is one of my biggest pet peeves! 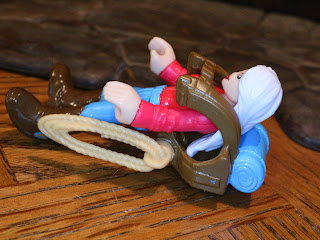 * Maybe a decade ago I was trying to come up with a list of the most egregious flaws an action figure can have. The Backpacker has two of them: She has a holster/ sheathe for an accessory but nothing to put in it (see above) and she cannot properly interact with an included accessory. It's clear just by looking at her that this backpack wasn't designed to fit the figure. Furthermore, it's too heavy for her smaller frame and she just tips over backwards when wearing it. Lame! 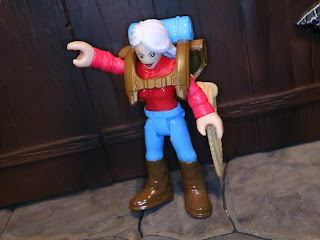 Kind of disappointing, huh?  The Backpacker is another Eh and a 1/2 figure in this series. I'm really curious what Fisher-Price was going for with this figure. For years the Imaginext Collectible Figures Series always seemed really well thought out and clever, but this serious has some figures that just feel lazy. Why not at least give her a torch or the machete from the Jungle Explorer? Remember when the figures used to mostly have cool armor and overlays that changed their appearances? Yeah, me too. This is, sadly, another Eh and a 1/2 figure.