Action Figure Review: He-Ro from Masters of the Universe: The Powers of Grayskull by Super7 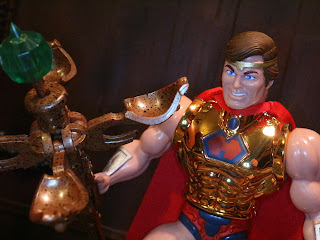 Yesterday I checked out Eldor, the heroic mentor from Super7's Masters of the Universe: The Powers of Grayskull and now I'm checking out He-Ro, the Most Powerful Wizard in the Universe. I talked a lot about these figures yesterday and their significance in Masters of the Universe history so today I'm going to give less of a history lessen and more of some general thoughts on Super7's efforts here. Super7 has done some really cool stuff with the Masters of the Universe license and while they have had some criticism due to pricing and delays, overall I think they've done a pretty good job of doing something with a license that Mattel kind of threw away for a few years. Honestly, I wonder if if it was the fact that so many companies like Super7, Mondo, Funko, and The Loyal Subjects wanted the rights to do MOTU product that Mattel seems to now be interested in getting back into the game and is really pushing the upcoming film. Hopefully there is room for everyone at the table so that collectors are presented with a wide array of MOTU offerings. Super7 does a stellar job on packaging and art design and in these respects He-Ro truly excels. Let's check out He-Ro in detail after the break... 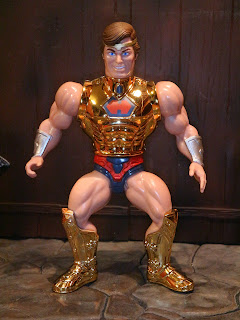 Accessories: Staff and "The History of He-Ro" minibook. 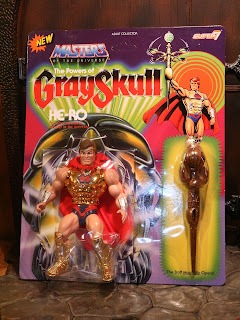 * Like with Eldor, and most other Super7 releases, the packaging is excellent. Of course, with this series Super7 recreated the packaging originally designed for the 1987 line. It is not collector friendly as there is no way to open it and remove the figure without completely ruining it but it is very attractive. 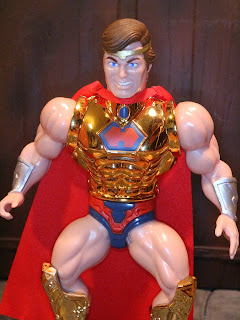 *Remember that this is a figure that was originally designed to be released in 1987. Keeping that in mind, there is a lot here that definitely feels like the MOTU figures from 1985 and 1986 and yet the figure still has a very unique look to it. Compare it to the earliest figures in the line, though, and you can see a huge difference. Mattel was definitely going for a very different fantasy feel for The Powers of Grayskull than they went for with the earliest MOTU line and He-Ro shows that. He's bright and bold with primary colors and a fairly general heroic look. There are definitely elements of He-Man's design here but it certainly seems much more elegant and refined rather than barbaric and savage. 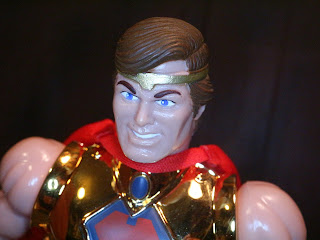 * OK, He-Ro might look a little too friendly but he definitely has a pleasant, heroic face that seems like it would fit the lead of a new branch of the MOTU franchise. The golden circlet is an interesting touch. Again, remember that this was designed in 1985 or 1986 for release in a 1987 line; I wonder if the exaggerated friendly features were designed to replicate the character aesthetics of the Filmation series? 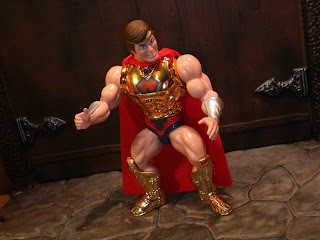 * While the hips are designed with more modern swivel/hinge joints He-Ro very much feels like a vintage Masters of the Universe figure from the later years of the line. He also moves like one with his swivel joints.Apparently the vintage figure would have had an action feature where He-Ro would have raised his right arm via a button press but that feature was left off of this figure. 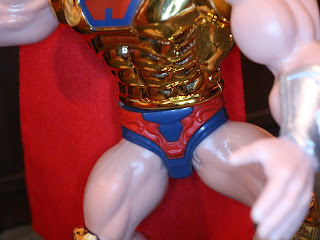 * Like most of the classic MOTU figures and Super7's Filmation inspired neo-vintage releases, He-Ro has a spring-loaded waist that allows him to throw a punch or cast a magic spell. I always get a kick out of this feature and I'm glad Super7 is still including it! 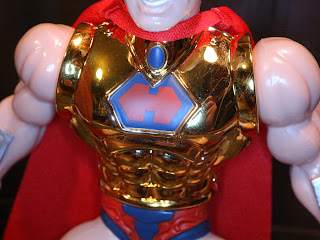 * The vintage He-Ro was supposed to have vac-metallized armor and boots and so this one does, too. For a period during the production of this piece apparently Super7 wasn't going to include the feature. I don't know why but I know a number of companies have moved away from vac-metallization over the past few years. I'm not always a fan of it but I like it here. It looks good and is faithful to the vintage aesthetic of the prototypes we've seen. 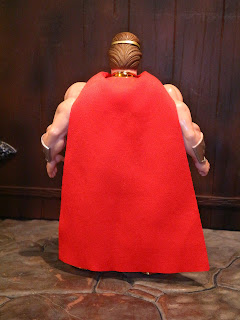 * He-Ro includes an actual soft goods cape that easily fits over He-Ro's shoulders. It looks great and adds a great extra level of mystical, magical feel to the figure. I'm way happier with this than I would have been with a plastic cape. 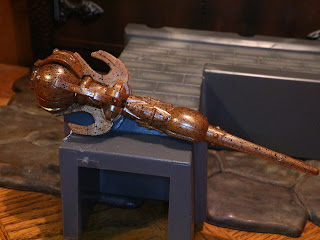 * He-Ro includes his Staff of Transformation, a magic staff that allows He-Ro to channel Eldor's Book of Living spells so that He-Ro can transfigure the world around him. It's a cool looking and very complex accessory that opens in four places to reveal a green gem inside. I've heard reports of hinged arms of the accessory breaking but mine seems A-OK so far. 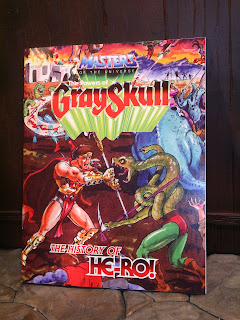 * Like Eldor, He-Ro includes a miniature book about the history of the character that showcases concept art and photographs from The Power and Honor Foundation. Written by Emiliano Santalucia and James Eatock, this is a really cool 14 page book that is filled with coolness. It's very reminiscent of the excellent art book that The Power and Honor Foundation put out a number of years ago and it really adds value to the figure. 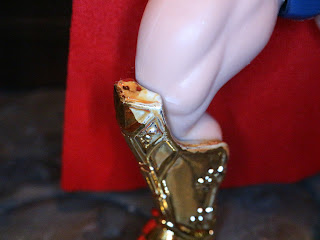 
* Overall the vac-metallization on He-Ro looks fantastic but there does seem to be a weird area where coverage is lacking on the top of He-Ro's right boot. Hopefully this doesn't lead to any flaking over time. 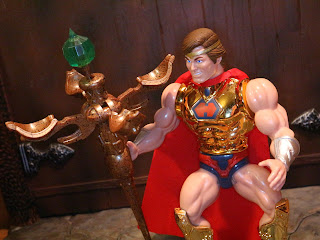 * The back of the package explains that the original intention of the figure was for He-Ro's right arm to be able to thrust forward and for the staff top open up and reveal the gem within. While I can understand Super7 not going forward with the arm thrusting action I do wish that the staff could actually close and stay closed; it doesn't, though. You can push down on the gem and close the staff but it will immediately pop open again. There really isn't a way to have the gem just stay closed on display. 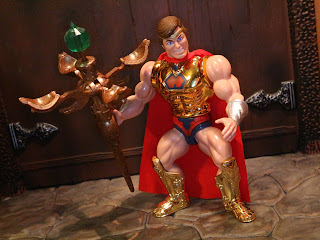 Super7 has done another excellent job in recreating a vintage figure and essentially finishing up the original planned The Powers of Grayskull line. He-Ro looks fantastic both in and out of the package, and the inclusion of the mini-book makes things even better. While He-Ro was released in MOTUC around a decade ago, it's nice to have the Most Powerful Wizard in the Universe in his (hypothetical) vintage style. I have hopes that at some point Super7 will be given clearance by Mattel to create new figures in the vintage style rather than just creating Filmation variants. This is a Great figure that pays tribute to an interesting aspect of MOTU history.


This is the first figure of He-Ro I've reviewed on the site. For more from The Powers of Grayskull check out the following:
Eldor
Posted by Barbecue17 at 6/11/2019