Road to the Last Jedi: Guardians of Evil 4-pack from Star Wars: The Black Series Phase III by Hasbro 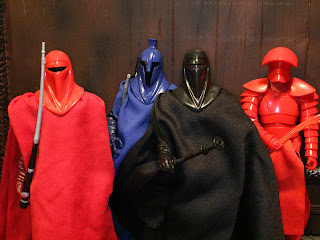 Hasbro has released a few retailer exclusive 4-packs over the past few years but this one might be the best of them all. While the packaging doesn't name it Guardians of Evil, all of the promotional and ordering information seems to have referred to it that way and thus that seems to be what collectors are calling this new set that explores four different incarnations of the various Royal Guards through the ages. Included is a Senate Guard from Revenge of the Sith, a Shadow Guard from The Force Unleashed, a standard Imperial Royal Guard from Return if the Jedi, and an Elite Praetorian Guard from the upcoming The Last Jedi. While the standard Royal Guard is exactly the same as the figure released earlier this year, he's not a character I mine having a duplicate of as I'd wanted two of them, anyways. This set is exclusive to both GameStop and Barnes & Noble and my preorder just came in from GameStop last week, so that's the place to check if you want this set ASAP. Let's check out this super cool 4-pack in a bit more depth after the break... 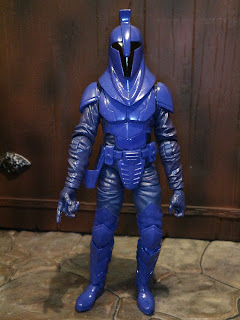 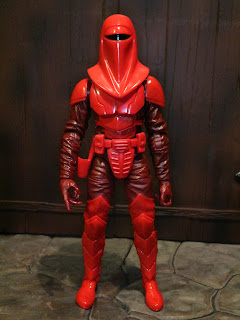 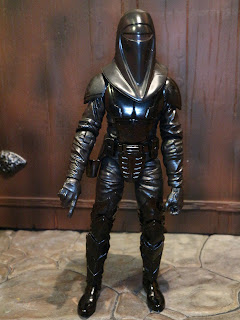 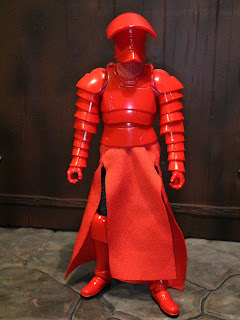 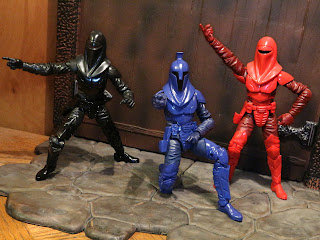 *Let's start with the articulation and, since the Shadow Guard, Senate Guard, and Royal Guard are all the same, I can talk about them at the same time. While the heads are a bit more limited due to the longer helmets, the rest of the articulation on these figures is incredible. They are really fun to play with and can easily be put into a variety of poses. They look just as great standing at guard as they do in combat. 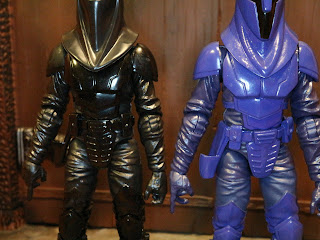 * Underneath the robes these figures are decked out in some really cool armor. This is a nod to the Expanded Universe story Crimson Empire and it's a welcome addition that adds quite a bit to the figures. I love the detail present here. It has a very clean, very manufactured look that seems perfect for an elite Imperial soldier. 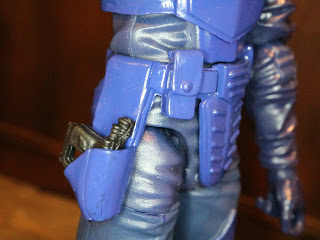 * I gotta admit that I find it pretty cool that the Royal Guards tote these little blaster pistols underneath their robes. The holsters and belts on the three Royal Guards are cool little touches. 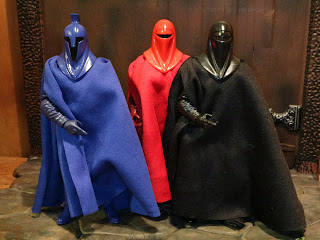 * Hasbro doesn't hesitate to use soft goods in this line when necessary and, this time, it's absolutely necessary. Remember the Power of the Force 2 figure? It looked cool but didn't have much functionality. These figures have no lack of functionality due to the actual fabric robe, though. I have a few complaints about the fit, but the robe feels like it's made of a good quality material and adds a very dynamic feel to action poses. The robes are removable if you remove the head, which can be done with a fair amount of pressure. Try carefully heating the heads with a hairdryer and it will be easier. 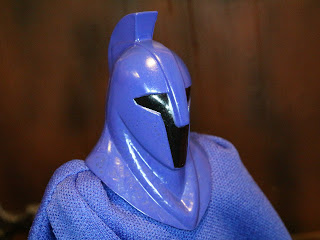 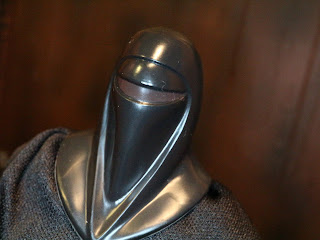 * Both the regular Royal Guard and the Shadow Guard have the same headsculpt. It isn't an overly complex design or anything but the likeness to the film prop is exceptional. They're rather shiny, which seems fitting, and the visors seems incredibly menacing. Hasbro almost always nails the sculpts of characters wearing armor in the Black Series and this sculpt is no exception. 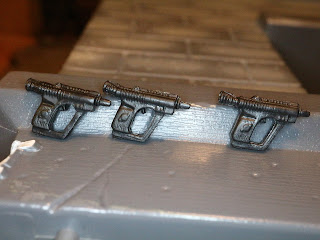 * Each of the Imperial guards includes an EC-17 hold-out blaster pistol. This is the same model of pistol that the Biker Scouts carry and it's very similar to the pistol that came with the earlier Biker Scout figures (both the standard and the Shadow variant), but a reverse mold. The scope is on the wielder's right side instead of the left side. 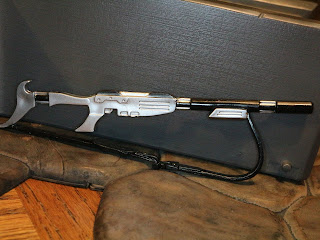 * This is the first appearance of the Senate Guard Ceremonial blaster rifle in the Black Series and it is an extremely well designed accessory. The sculpt seems a bit thick but the detail and paintwork make this an impressive piece for a sleek looking figure like the Senate Guard. 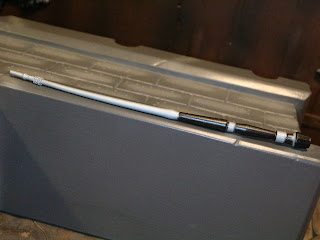 * The Imperial Royal Guard includes his classic Force Pike. It's exactly the same as the accessory included with the single release but that's not a bad thing at all. The paint job is accurate and the Royal Guard can easily hold the weapon up against his shoulder. 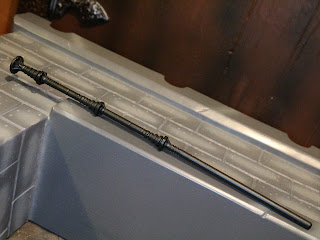 * The Shadow Guard also includes a new accessory: A lightsaber pike. Molded in black plastic, there any paint applications here but there is some great detail. This is a cool, unique weapon that feels very different from others we've seen in the Black Series. It does have red removable lightsaber blade, but I'll get to that in a minute... 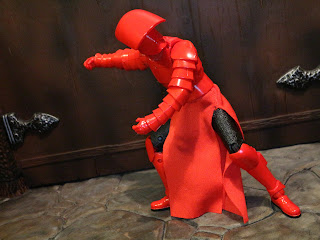 * The Elite Praetorian Guard is a completely new figure. Well, to me at least. I haven't found the single carded figure yet. There seem to be at least four different versions of these guys, differentiated by their helmets and weapons. I think they share the same bodies and, overall, the articulation is pretty solid. The elbows are a bit limited but overall you should be pretty pleased with these dudes. 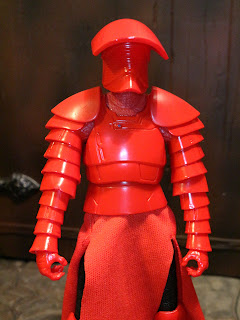 * I love the design of these guys. You can definitely see how they were inspired by the Emperor's Royal Guards but they seem so much more "hands on." Their armor has some fine details and, like with the Stormtroopers, you can see the mixture between the Plastoid heavy armor and a bodysuit underneath. There are also two separate paint schemes to differentiate the differing outfit materials. The Plastoid armor is very shiny and looks great. 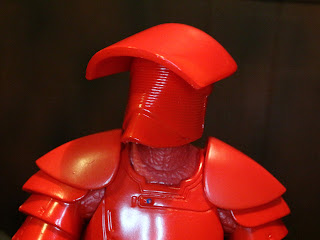 * I love the helmet, too. It's definitely unusual but I think that's a good thing. It's nice to see something we haven't seen in a design. Something about the armor styling seems to show a Japanese influence. 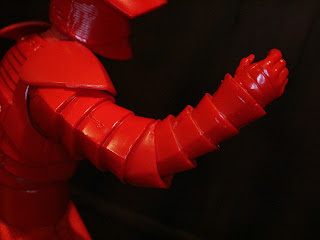 * The Elite Praetorian Guard's arms are covered by overlapping armor pieces. In order to preserve some articulation while still giving the figure an accurate appearance Hasbro has placed one of the armor collars over the swivel/hinge elbow, thus the joint can still move while the appearance of the armor pattern is not affected. 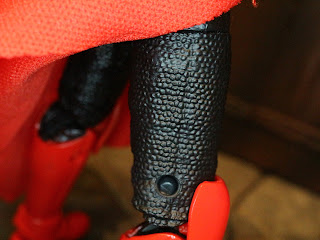 * The Elite Praetorian Guard has a very nicely detailed suit underneath his armored bits. I like the textured pattern on it. 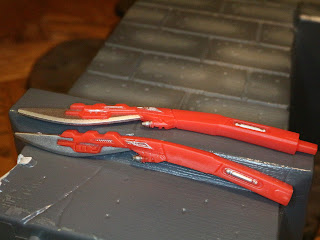 * This figure includes two bladed weapons that attach together to create a longer weapon. The weapons have some very cool details and a fairly intricate paint scheme, too. I really like these. They remind of something from the Knights of the Old Republic games. 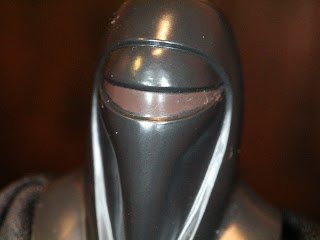 * The Emperor's Shadow Guards are supposed to have red visors, something that looks pretty striking against their black armor. This visor is...light maroon? Mauve, maybe? It's definitely not a very striking red color, and that hurts the appearance a bit. 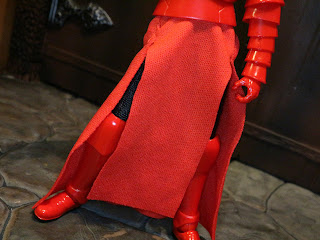 * The Praetorian Guard's skirt is very functional but the color seems a bit too light in person. I wish it were a bit bolder to fit in with the shiny red armor. 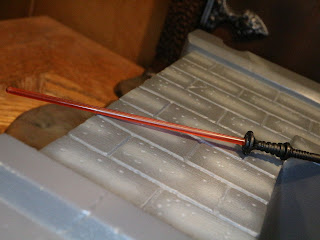 * The Shadow Guard's lightsaber blade falls out of the lightsaber pike very easily. Be carefully when carrying it around or displaying it; you don't want to lose it. 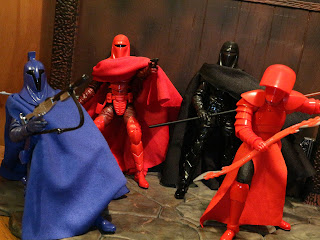 The Guardians of Evil set is easily one of the best retailer exclusive multipacks that Hasbro has released. There's not a truly weak figure in this set and every figure feels very unique. There are also quite a few new items here including new accessories and two unique headsculpts. While you are getting a figure that has been 100% released before (the Imperial Royal Guard), I feel like this definitely is a figure that most collectors will want two of for their collection. I certainly did, so I only picked up one of the single packed figures anticipating this set. This is a Great and a 1/2 set and is well worth picking up. It's pretty cool to get a Prequel, Original Trilogy, Sequel Trilogy, and an Expanded Universe/ Legends figure all in one pack!


If you're looking for more Star Wars: The Black Series Phase III figures, check out the following: