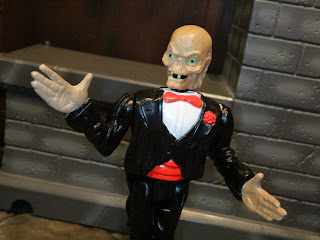 For today's installment of The Curse of 31 Days of Toy Terror we're receiving a visit from an old friend: The Cryptkeeper! Distributed by Ace Novelty in 1994 as a tie-in for the 1993-1997 animated cartoon Tales from the Cryptkeeper, this line was very much a flash in the pan (though the cartoon lasted longer than I remember). It honestly feels like the true intention was to release a couple toys of the Cryptkeeper due to his popularity based on the HBO series rather than to do a toyline that was really related to the cartoon. I originally reviewed the robed version of the Cryptkeeper a few years back and now I'm finally getting around to this version of the character in his snazzy tuxedo. Like the robe wearing version, this guy also resembles the live action television version rather than the cartoon version. I definitely think Ace Novelty made the right choice there as I still keep this guy around 23 years later as no one, so far as I know, has released better action figures of the Cryptkeeper. The guy is arguably one of the greatest horror icons of the 1990s (with roots in 1950's EC comics) and he probably deserves more attention than he gets these days. Let's pay him tribute on this spooky October day, shall we? Enter the crypt after the break for more horrific fun! 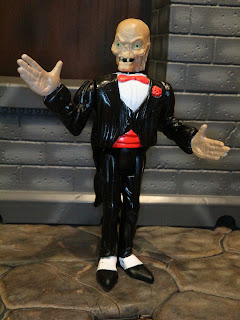 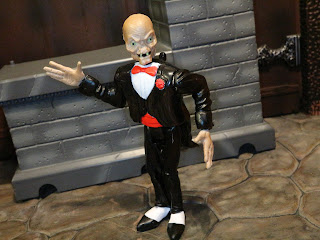 * While the Cryptkeeper only features the standard 5 points of articulation (which were starting to become a bit dated by 1994) the fact that he is slightly preposed is cool. He's not in a crazy "extreme" pose or anything but he definitely looks like he's gesturing, which adds some character to the figure. There is an action feature, but I'll get to that in a minute... 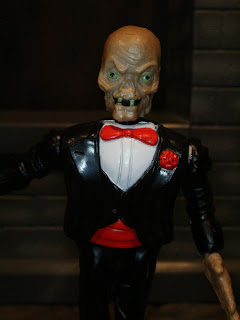 * The sculpt on this is pretty good. The body is basic but adequate (not unlike what you'd see on many other mid-90s toys) and does feature a fairly accurate looking tuxedo. The body proportions of the chest are a bit off, but that's probably necessary to house the action feature. Still, this is a sharp and recognizable look for the Cryptkeeper. 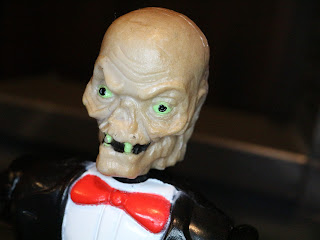 * The headsculpt on this guy is good, Really good, actually. Like I mentioned in the introduction, the head definitely resembles the HBO version of the character rather than the animated version of the character, but that's definitely the preferable look. The sunken eyes, maniacal grin, and long silver hair in the back do a nice job of capturing this charming corpse. 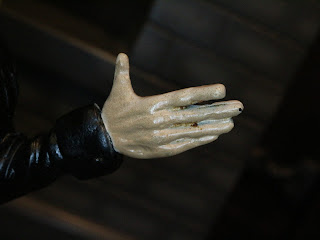 * The hands are kind of creepy in a corpse-like way. The long slender fingers and pale brown hue definitely help sell this as the hand of a mummified corpse. 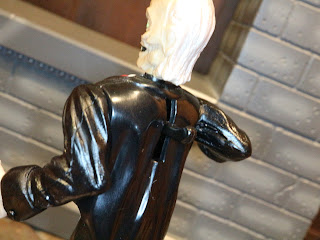 * One of the things that really hurts this figure is that it has an action feature incorporated into it that feels rather perfunctory. Pull the level on the back of the figure and the Cryptkeeper's arms move just a little while his head turns. It just seems unnecessary; it's not something fast or cool like a spring-loaded punch or something. I mean, it's an articulated figure: I can pose it if I want to see it move. 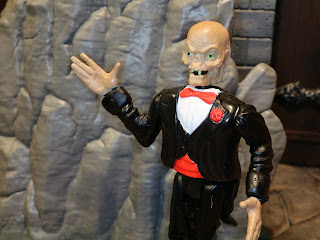 I like this guy. I actually like him better than the robed version of the character. For some reason, the tuxedo wearing version of the Cryptkeeper seems more true to the character (well, at least the HBO version of the character). While I only watched the show a couple of times during the 1990's while on vacation, Tales from the Crypt is one of those 1990's things that I feel nostalgic for at this point. I'd love to see a revival of the series and a newer, cooler toy based on the good ol' Cryptkeeper. For now, there's this guy. He's a Good and a 1/2 figure and one you can still find pretty cheap.


As mentioned earlier, I've also reviewed the robe wearing version of the Cryptkeeper from this same line.
Posted by Barbecue17 at 10/21/2017