The Curse of 31 Days of Toy Terror: Dracula from Big Bucket of Monsters 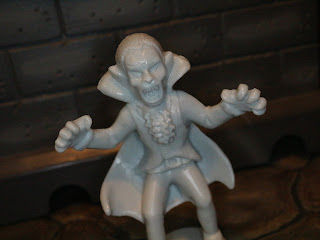 One of the favorite haunts of both me and my daughter is The Creature's Crypt in Fort Mill, SC. Affectionately called "the monster shop" by my little one, The Creature's Crypt is a store specializing in handcrafted masks, decorations, and horror memorabilia. They also sell lots of cool random horror and sci-fi toys, which is how I managed to snag the cool little minifigure I'm reviewing today. It's a Dracula minifigure from a series of minifigures called Big Bucket of Monsters. This is a "generic" line of plastic minifigures sold in a big tub but some shops sell them individually. My daughter and I discovered this series at The Creature's Crypt back in early July and picked up one of each sculpt from the line. Today I'm going to look at the very cool Dracula minifigure. Let's check out this little plastic Count after the break... 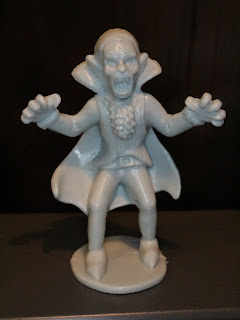 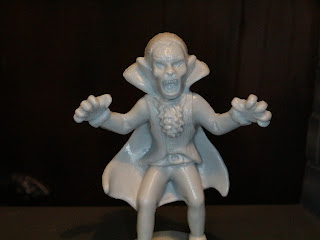 * Dracula is a very solid little minfigure. He's build more like a plastic army man than something like a M.U.S.C.L.E. but the level of detail is quite impressive. The sculpt is fairly intricate, particularly the gruesome, animal-like face, the pinstripes on his vest, and the stuff on his chest. It's either ruffles or a massive mound of chest hair. Dracula is also posed in a very vampire appropriate pose with his hands outstretched and his head leaning in, ready to grab a bite. 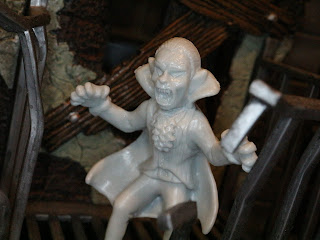 I probably paid around .50 cents for this guy and I'm satisfied with that. He stands up securely, looks great, and is pretty fun to stand around and position with other minifigures. While you can order a full bucket of these, you could also stop by The Creature's Crypt and pick some individual figures out. Make sure to grab Dracula if you do! He's a Great minifigure with quite a "bit" more detail than you normally see on this sort of minifigure. Get it? Bit?

If you know anything more about these, such as the name of the manufacturer, please let me know!