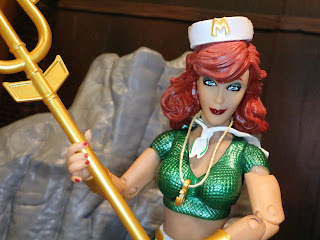 First, let's get it out of the way: Yes, DC Collectibles has already cancelled the third series of Bombshells action figures. They cancelled them just as series 2 was shipping, which seems like a lame thing to do to retailers. I'm sure some people will change their mind on purchasing these since, essentially, they're a dead line. Now we won't get Black Canary, Zatanna, Supergirl, or Bumblebee. Very sad.

Second, yes, I'm including Mera in my "Unite the League" subheading because she is indeed going to be in Justice League. Played by Amber Heard, Mera is scheduled to be in both Justice League and next year's Aquaman. That is without a doubt the biggest push the character has ever had! There is am Amazon exclusive Mera coming out next month based on Amber Heard's portrayal of the character but today we're checking out this version that's based on Ant Lucia's artwork for the excellent DC Bombshells property. She's part of the second series along with Katana, Batgirl, and Hawkgirl. More underwater fun after the break... 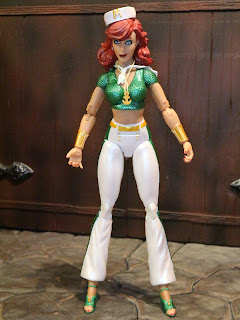 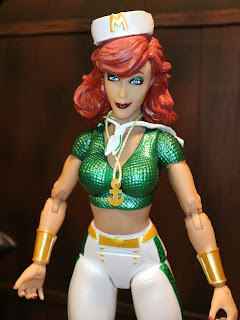 * First of all, Mera is just a plain incredible looking figure. Back when the statue was being designed three different versions of Mera were solicited to collectors in a poll so they could decide on her look. While option A won (the version of Mera that the statue is based on) option B has appeared in a a few other forms such as in the Lil' Bombshells line by Cryptozoic. Interestingly, DC Collectibles went with this choice for the action figure, too. It's still a great look, though. The sculpting by Erick Sosa is excellent and gives the figure a beautiful look that does justice to Ant Lucia's artwork. 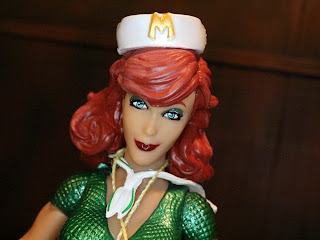 * I like the headsculpt. The face seems a bit thinner than I would have expected but I appreciate that not every Bombshells female looks the same. The hair looks excellent, too, and the paint applications on the eyes are great. 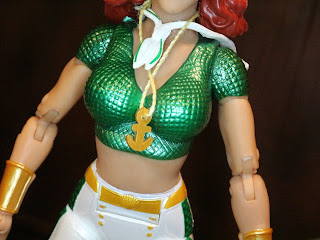 * Mera's top looks to be made of some sort of scaly material. Who knows what it is? It looks really nice, though, and has a great metallic sheen and impressive texturing. 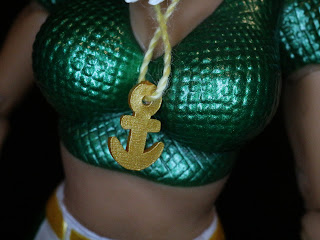 * Mera is also sporting a little anchor necklace around her neck. The anchor is super clean and sharp while the necklace is made from actual fibers, kind of like a nautical rope. 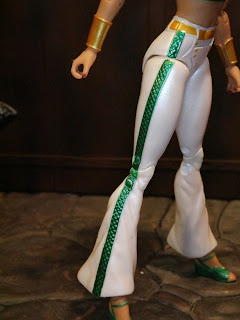 * Mera is sporting some awesome sailor styled pants. They have a great flare on the bottom and green stripes down the sides that match her top. 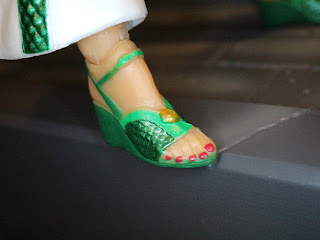 * Mera's shoes also match her top and the stripes on her pants. The sculpting and paintwork is really near for something so small. Even her individual toes are noticeable and have painted red nails. 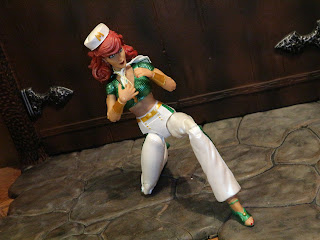 *  The Bombshells have some fantastic articulation; perhaps one of the best blends of sculpt and functionality I've seen. It seems as good, and possibly even better, than the now defunct DC Icons. Mera is solid, durable, and has a pretty great range of motion. She is just so insanely fun to play with and to photograph. 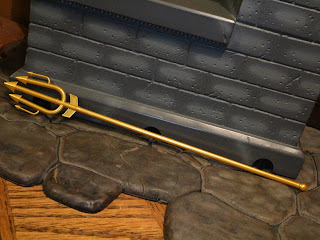 * Mera's trident is excellent. I love the gold color and the prominent tines on the head. 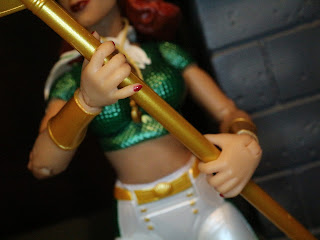 * Mera's hands are also perfectly sculpted to hold it. She even has really uniquely posed fingers to make her look like she's actually interacting with the accessory and not just merely grasping it. Pretty cool. 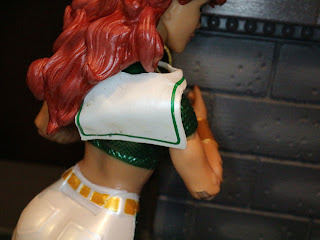 * Mera is sporting a sailor styled neckerchief. It's a great detail but mine was bent out of shape while tucked in behind Mera's hair. I'm hoping it will straighten out given a bit of time. 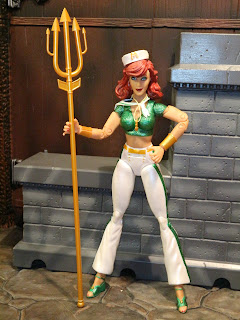 I am absolutely devastated that DC Collectibles cancelled this line as these are easily some of the best action figures released this year. They seem like they're selling well, too, so the cancellation seems like more of a bizarre corporate decision on DCC's part rather than any kind of sales choice. Mera is an epic figure. She's well articulated, excellently designed, sculpted, and painted, and incredibly gorgeous! I will point out, though, that DC Collectibles has decreased the accessories included with this series of figures. Unlike the series 1 figures Mera doesn't include any extra accessories or alternate hands. Still, it's tough to be too upset when she's so well made.


So far the only other Mera toy I've reviewed is the Lil Bombshells Mera. If you're looking for more figures from the DC Designer Series, check out the following: