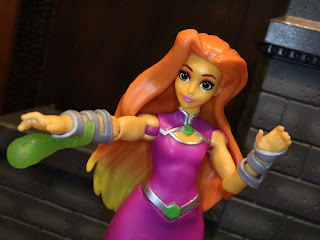 My four year old has owned the 12-inch Starfire from DC Super Hero Girls for quite a few months now but I only just managed to find the 6 inch Starfire from the line. I really like this line and what Mattel is doing with it; while they aren't the best action figures available at mass market retail stores, they're definitely a lot cooler than many of the toylines offered to kids. It's nice to see the character selection starting to improve in the 6-inch linen although it would be cool to see some more villains in the line (I know Mattel has released Harley Quinn but she's not really considered a villain in this series). Honestly, it's nice to see that Mattel is releasing a fairly diverse roster of female characters in this line. Let's check out this pretty cool Starfire after the break... 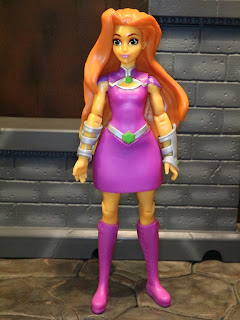 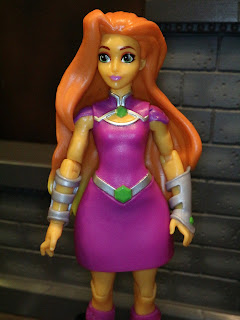 
* Starfire is a really nice looking figure. I like the character design for her in DC Super Hero Girls; it looks a lot like some of the Teen Titans or the DC You version of the character. The purple dress is really nice and I like the fact that the skirt portion is an actual separate piece that rests over her waist. The paint work is pretty clean and the green gems definitely stand out to make everything look extra slick. 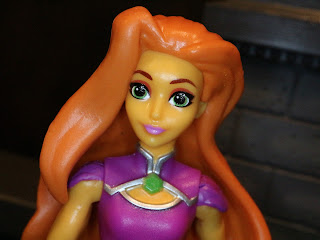 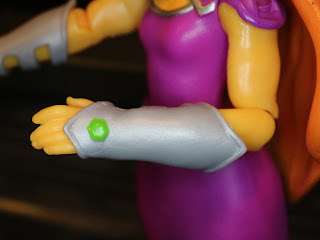 * The bracers Starfire wears here are really cool. They're actually separate pieces that rest over the forearms, giving the figure a much more detailed appearance. The bracers aren't intended to be removable but if you used a hair dryer you could probably pull out the hands and take them off. I don't know why you would want to do that, but you could if you were crafting a custom or something. 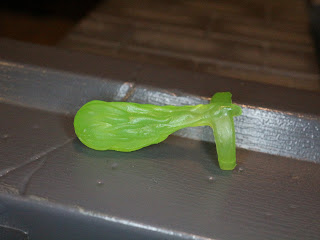 * Starfire comes with one of her starbolt blasts as an accessory. It's molded in translucent green plastic and has a little clip to attach it to Starfire's wrist. I'm always a fan of energy effects and such, so this is a very cool inclusion in my book. 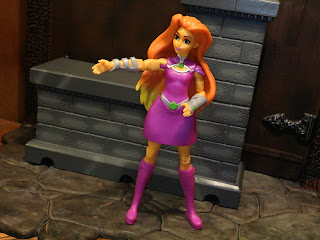 * While Starfire has the same articulation as pretty much every other figure in this line, her hip motion is incredibly restricted due to her skirt. There is almost no range of motion in her hips which is rather unfortunate. 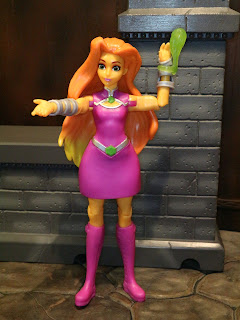 I realize that I am absolutely not the target audience for this line but as a DC collector, I can't help but like these. While they're not the best action figures on the market, this is still a very cool Starfire action figure. I really like her costume and the fact that she includes a starbolt accessory. The articulation is definitely hampered by the bottom of her dress but that's probably my biggest problem with her. Consider these only run around $10 dollars, this is a pretty cool toy for kids or a Good and a 1/2 addition to a DC collection, especially for fans of Starfire or the Teen Titans.

The only other Starfire figure I've reviewed is the DC Collectibles Starfire from the Red Hood and the Outlaws line.

If you're looking for more DC Super Hero Girls figures, check out the following: