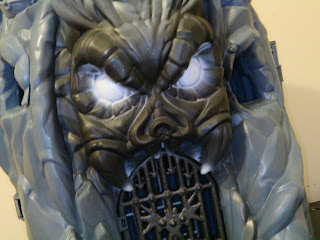 Today I'm wrapping up my 2018 reviews with a massively epic review of the DC Primal Age Batcave. Yes, my friends, this is a Batcave designed as if it were the vintage Masters of the Universe Castle Grayskull. Let's talk about DC Primal Age for a bit before I jump into this review. In late 2017 Funko began showing off some 5.5 inch action figures reminiscent of Mattel's Masters of the Universe and other similar fantasy lines from the 1980s. They first showed Mortal Kombat and then later expanded to ThunderCats and a Horror line. A DC based line, called Primal Age rather than Savage World was announced in the early fall, and it appeared to be bigger and better than the previous offerings as it included more figures, mounts, licensed items, and the Grayskull like Batcave that I'm reviewing today. Amazon was set to have a big launch for these but their offerings were....problematic. Look at the reviews on nearly any Primal Age offering on Amazon and you'll see stories of breakages and cards arriving in terrible shape. I was insanely excited about this line but hearing about the breakages killed my enthusiasm and I resigned myself to believing this would be a failed project. It turns out that Funko had bigger plans for the line as Target had a large retail launch planned for early 2018. Not only was Target stocking these on special end caps but the figures have been redone to correct the breakage issue. I've now picked up all of these. The Batcave and the mounts remain the same, so I'll be reviewing those now as the last items I check out for 2018 but the figures will be part of my 2019 reviews. Savvy? Alright, well let's get this show on the road... 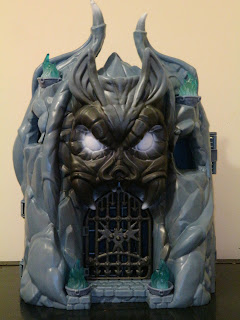 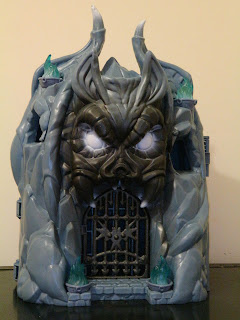 * The first thing that strikes you about this toy is how large it is. It is as large as the original Castle Grayskull and comes in an absolutely massive box. I ordered this via Target.com and was absolutely floored by the size of the package. The Batcave looks very cool and definitely evokes the feel of Masters of the Universe and other similar 1980s toylines. if you didn't know this was a newer product, you might really believe that it was made in the 1980s from some toyline you forgot existed. There isn't much paintwork here but the front of the cave, designed to look like the face of a giant bat creature, does have some sprayed on paintwork to give it a darker face and white eyes, similar to the shading of the vintage Castle Grayskull. 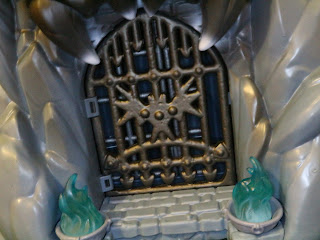 * The front entrance looks like an iron gate with a metal bat design in the middle. It's recessed a bit in the front wall of the cave and is surrounded by braziers emitting blue flames! 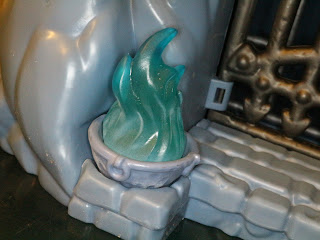 * I love the blue flames here! They're translucent and really, really appealing. I'm not sure why Funko went with blue flames, though. Maybe to match Batman's blue and grey color scheme? I like it as it looks otherworldly and mysterious! 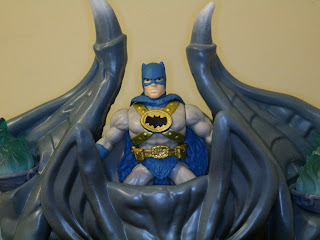 * The top of the Batcave features a watchtower where a figure can stand. It's a cool feature and makes for a neat way to display the castle. Batman looks great up here! He looks great anywhere, though. There's a Target exclusive black and grey Batman coming out, so maybe he'll stand up there when I get him. Decisions, decisions! 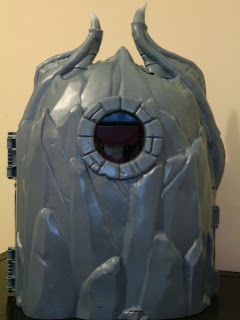 * The rear of the Batcave simply looks like a rock outcropping with a viewing window on the outside. We'll see more of that in a bit. I do wish there had been a little something else out here, though, as the back feels kind of plain. A secret entrance or something would have been pretty cool. 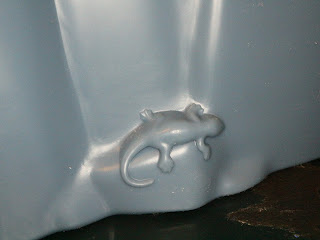 * On the bottom of the back of the set there is a cool little lizard detail. It's very simple but, again, it fits the style of the time period that this toy is meant to emulate. 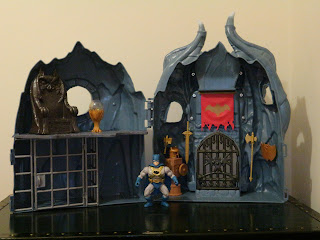 * Here is the set fully opened up. I gotta say that i is incredibly impressive. While the front half doesn't have a second floor, there still is a lot going on. 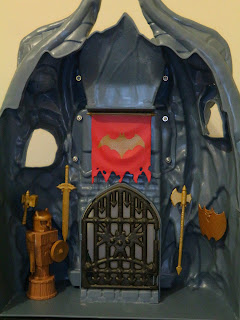 * The front half features an armory and a massive flag bearing the batsymbol. 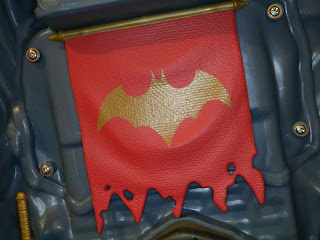 * The flag is rather nice and I like the red and gold color scheme. It stands out well against the blues and grays of the set. It would have been cool to have it on the top of the set in some way, almost like a medieval batsignal of sorts, but I like the way it looks here, too. The sculpted texture is nice and the tattered appearance adds to the atmosphere of the set. 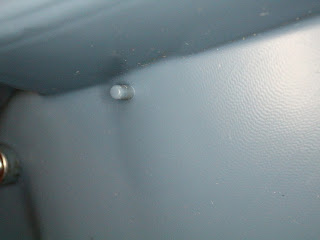 * What I don't like are the tiny pegs it hangs on. They feel so delicate and fragile! I wish Funko had used a stronger feeling connector to keep the flag up! 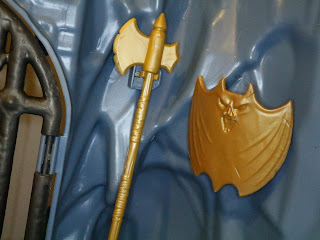 * On the right side of the door are two clasps to hold two removable weapons. You get a large war ax and a bat shaped shield. 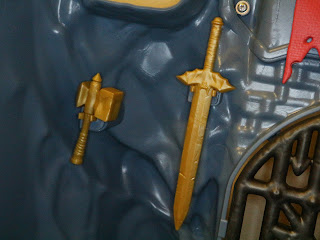 * On the left side hangs a small battle hammer and a larger version of the sword included with the Primal Age Batman. 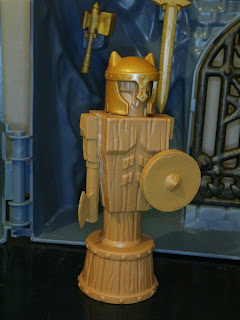 * Where this set really excels is in some of the accessories, which feel like very high quality pieces that could be used in a vintage MOTU collection. First up is this cool wooden training dummy. The sculpt is nice, although still matching the 1980s styling of the set, and it looks great sitting around in the armory. Wouldn't this fit well in Castle Grayskull? 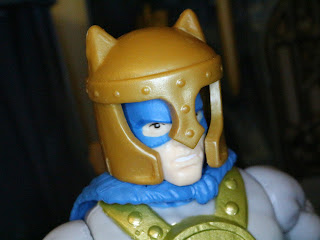 * The helmet that sits on the training dummy is removable and can be placed on Batman's head. Pretty slick, right? I love that the helmet has ears. It's not a perfect fit, but it does look cool for sure. 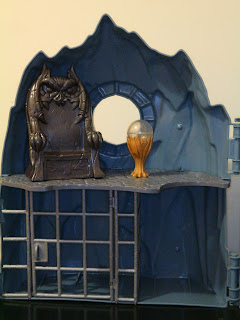 * The left side of the set features a dungeon and a second story. You do have to assemble the dungeon and second story by sliding the floor piece and dungeon cage in place. It takes a bit of skill but it seems to stay in place quite well once you get it where you want it. 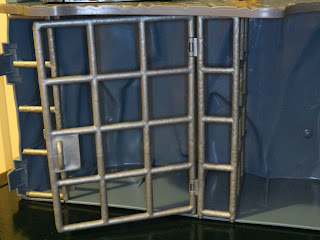 * The dungeon is very plain. It's actually kind of boring with no stickers, no details, and just a very simple looking cage. I really think Funko could have done better here. Where are the stickers in this set? That was one of the great things about the MOTU playsets and other similar 80s playsets and the lack of stickers is kind of a drag. 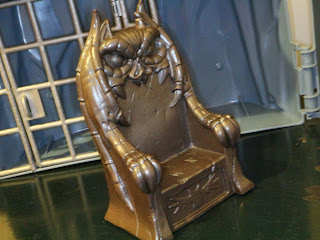 * This throne, however, is completely legit. This thing is heavy, durable, and looks really, really cool. You'll have to take Batman's cape off but he can "sit" on the edge of the throne and brood, which is just really cool looking. I love the DC Elseworlds stuff and this feels like something from a really cool Elseworlds tale. 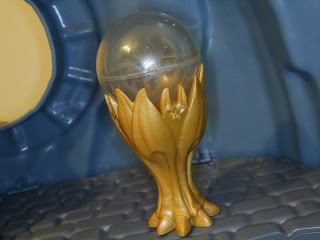 * Rather than a batcomputer, Batman has a crystal ball like gazing orb. The base is designed to look like bats while the orb itself is translucent. Again, this is another of those pieces that could easily fit in Castle Grayskull or another playset if you're buying this to mix it in with other toylines. 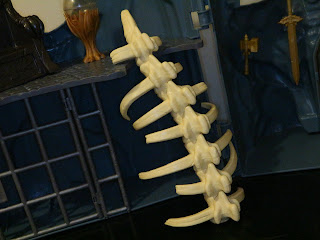 * Last, but not least, is this massive animal spine that is used as a ladder. There's a small section of the second floor cut out out to allow this to lean against it so it can stay in place. This is another very sturdy, very high quality piece and it looks insanely cool. It kind of reminds me of Battle Bones, too! 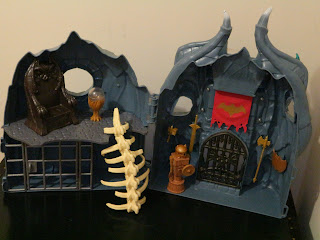 Considering that you can get this set for between $50 and $60 dollars (maybe less if you shop around a bit) I think it's a steal. I mean, it's huge, very nicely designed, and fills a cool niche that hasn't been touched on much. Could it have been better? Yeah, I really think Funko missed out on the opportunity for some cool stickers and maybe some cardboard inserts like the vintage Grayskull had. Still, as a Batcave, nostalgia toy, and display piece, this is a Great and a 1/2 set and something I don't regret buying in the least. I'm glad to have some high quality figures to go with it now, too.


If you're looking for more Batcave reviewed, check out my review of the Blast and Battle Batcave from the Batman: Power Attack line and the DC Nano Metalfigs Batcave Nano Scene.
Posted by Barbecue17 at 2/02/2019