The Curse of 31 Days of Toy Terror: Batgirl from First Appearance by DC Direct 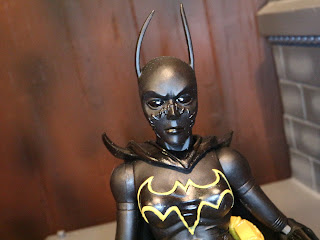 Today for The Curse of 31 Days of Toy Terror I'm checking out a character with a spooky costume...Batgirl! This isn't Barbara Gordon, however, but Cassandra "Cassie" Cain. Wearing the outfit she wore during her debut in 1999's Batman #567 during the No Man's Storyline, Cassandra Cain is part of the third series of DC Direct's First Appearance line. While this version of Cassie Cain was released in 2005, she continues to be a major player in DC Rebirth, particularly in Detective Comics. Sadly, it's been almost 10 years since her last action figure (Mattel released Cassie in this costume in the DC Superheroes line) and yet she continues to be a popular character. What gives Mattel and DC Collectibles? Maybe Mattel and DC Collectible's reluctance to release action figures of so many of the current Bat-family members might be the real subject of today's 31 Days of Toy Terror installment, huh? I actually just found this figure new in the box at my local comic shop for $9.99. That's a spooky good deal, don't you think? Do to her black and yellow color scheme and kind of creepy mask, I figures she'd make a nice addition to the countdown. More after the break... 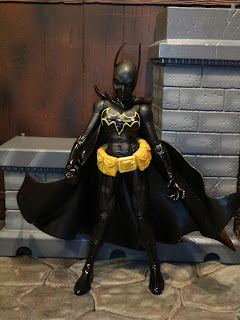 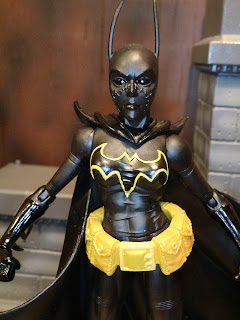 * Cassandra Cain has a very cool look that mixes the Burton films' black and gold look for Batman with the more feminine appearance of traditional Batgirl depictions. The paintwork is excellent with lots of different types of black paint to give the figure a mixture of glossy and matte finishes. 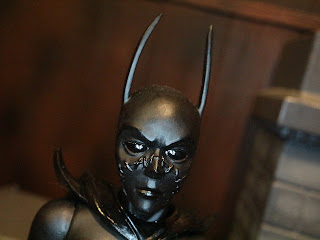 * The headsculpt is really good and accurately capture's Cassie Cain's appearance in the comics around the late 1990s/ early 2000s. The sculpted detail is good, especially around the stitching on her face (she covers up the exposed mouth, presumably because she was unable to speak). 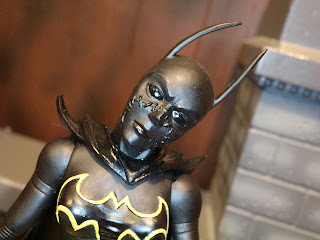 * While the rest of the articulation is a bit weak, the balljointed head is excellent and allows for some great expressive poses. Since gestures and body language are how Cassie communicates, this really fits the figure well. 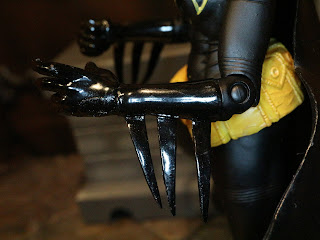 * You know I always have to point out the spikes on the gauntlets of any Bat-family figure, and these ones are great. They're made from a pliable material (so they won't break), but they're stiff enough to still look pretty wicked). 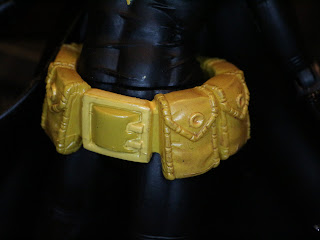 * This is one of my favorite utility belt designs ever. I love the large pouches that Batman used in the late 90s and early 2000s and Batgirl is absolutely rocking this look here. The sculpt is great with an appropriate level of bulkiness. There are also some nice, subtle shading and paintwork here as well. The belt is a separate piece that "floats" over the waist, giving the figure a much cooler appearance. 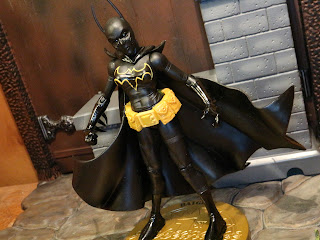 * Batgirl's cape looks really cool and dynamic. The edges are flared out and captured in a nice windswept pose. 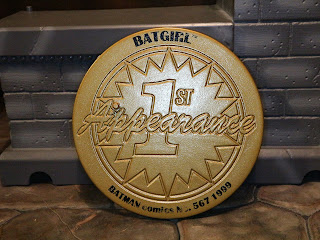 * One of my favorite things about DC Direct's release were that the figures almost always came with really cool display stands. Batgirl's is the simple 1st Appearance disc that features the engraved "1st Appearance" logo as well as some printing giving her name and the comic reference for her first appearance. More on that in a minute... 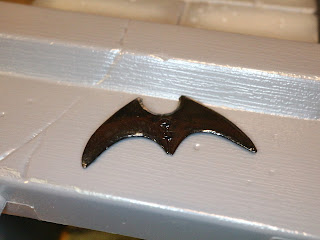 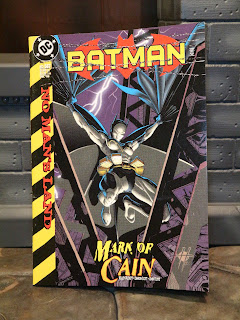 * A miniature copy of Batman #567 is also includes. This issue, "Mark of Cain," is small but readable. What a cool feature. I wish DC Collectibles would do more stuff like this. 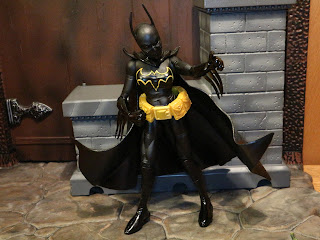 * The articulation on Cassie Cain is pretty limited. There are swivel and hinge joints, but they don't allow for much movement. The shoulders are balljoints, too, but they have a very, very limited range of motion. This is pretty standard for DC Direct figures of the time but it was also three years after Marvel Legends was released and while Mattel was beginning to handle the DC license, so things probably should have been better. 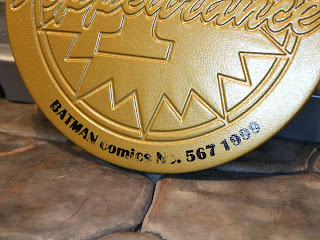 * The printing on the base looks like it didn't get applied evenly. Not sure what happened here? 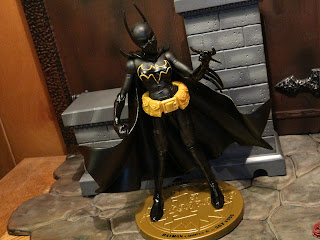 While DC Direct's articulation (and, sometimes, durability) show their age, their sculpting and character selection was always incredible. While Cassie Cain had been out for six years at the point of this figure's release, she was still a relatively new character. She's an excellent display figure that fills a much needed place in your Gotham City collection. I've owned the Mattel version of this figure since 2008, but this one has it's own unique charm. She's a Great and a 1/2 figure and easily worth the sawbuck I paid for her.

I've reviewed dozens of Batgirl items on here, but this is the first action figure of Cassandra Cain I've reviewed. It's also the first figure from the First Appearance series I've reviewed, too.
Posted by Barbecue17 at 10/22/2017