The Curse of 31 Days of Toy Terror: Zero from The Nightmare Before Christmas by Applause 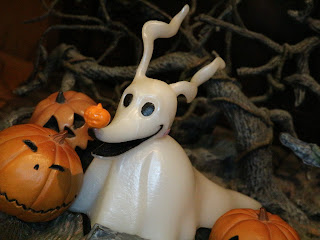 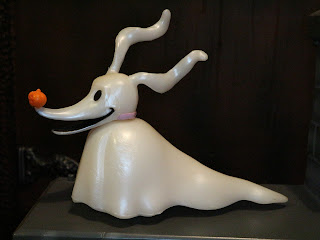 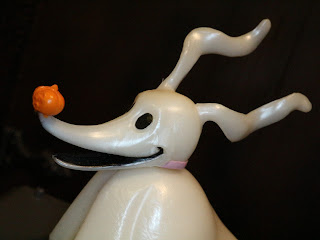 * I love Zero's character design and while he's much more spirit-like in the film, I think Applause did a pretty nice job of translating him into a toy. The proportions of the head look good and the face is absolutely adorable. The ears are also flying about in a very free spirited manner that should charm anyone who loves dogs. 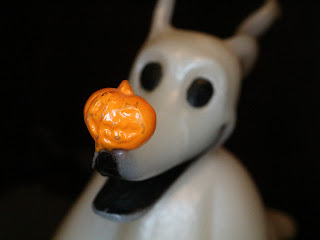 * Yeah, the paintwork doesn't look that impressive up close, but this is my super macro lens. When looking at Zero's pumpkin-like nose with your naked eye, the paint and the actual sculpted jack o' lantern face looks pretty good. Being a sucker for pumpkins and dogs, this just absolutely rocks my world. 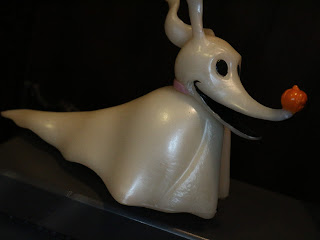 * Looking at Zero, he almost looks like he could be cast in glow-in-the-dark plastic. I'm pretty sure he isn't but the somewhat pearlescent plastic definitely gives off the same ghostly vibe. 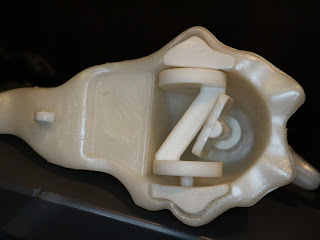 * Zero actually has an action feature: Roll him across a smooth surface and his head turns left and right. This has never been too big of a deal to me but the presence of the wheels does make him appear to float, which is pretty cool, and does add a little bit of extra oomph to him. 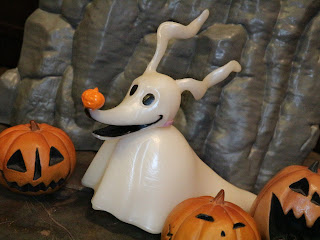 It's interesting to look at what toys I've decided to sell over the years and what toys I've kept. At this point I cannot imagine ever selling Zero. I've had him for nearly 25 years now! He's a really fun figure and a special part of my collection. I still remember how excited I was to add him to my collection as a kid and, every time I see him, I'm reminded of the fun of adding new, beloved characters to your toy shelf. Zero is a tough figure for me to be objective about in any way, so he gets an extra special Epic rating fueled by childhood nostalgia. Good boy, Zero!


This is the first Zero figure I've reviewed on Action Figure Barbecue! I have more Nightmare Before Christmas action figures though, including:

The Nightmare Before Christmas by NECA (2002)
Clown