The Curse of 31 Days of Toy Terror: Skeleton Toy Figures from Looking Spooky by Ningbo/ Walgreens 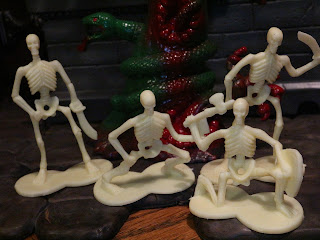 We're getting closer and closer to Halloween and today I'm checking out a fun little set of skeleton minifigures I found at Walgreens. Sold under Walgreens' seasonal "Looking Spooky" branding the set is simply called Skeleton Toy Figures and consists of 16 skeleton minifigures in four different sculpts. These were a total impulse buy on my part because who in the world could pass up a small army of skeletons for $2 dollars. Let's check out these spooky little guys after the break... 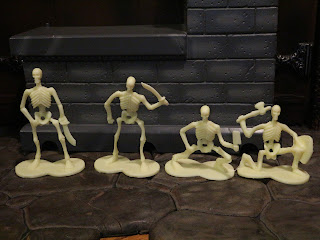 Number of figures: 16 in 4 different styles. 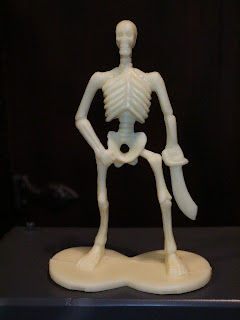 * The first skeleton is in a pretty standard pose holding a scimitar down at the left hip. The skeletons are actually pretty cool looking although the sculpts are a bit soft. They're molded from a plastic that can't really be described as rubbery but that isn't really firm or hard, either. Not bad, though. I kind of like the look. 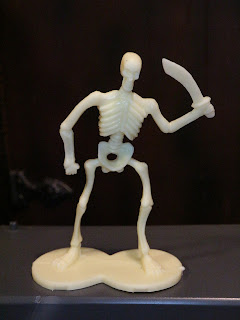 * The second skeleton is posed in a slight walking stance and wielding a scimitar. Rather than holding the scimitar down by the hip this skeleton looks like it is in mid swing and ready to lop off the heads of the living. 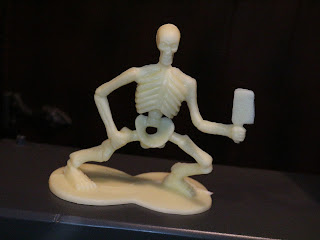 * The third skeleton is a bit bizarre as he's in a weird crouch and wielding a meat cleaver. That's an odd weapon choice, isn't it? While the other skeletons are wielding more classic or antiquated weaponry, this guy looks like he just raided a kitchen. 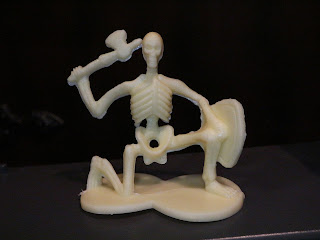 * Perhaps the most classic looking skeleton warrior in this set is this guy as he's wielding a medieval looking ax and a shield. He's also posed in a crouch. 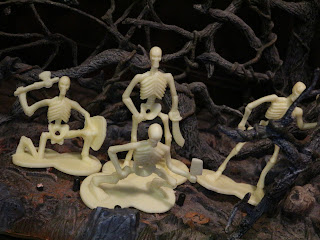 These aren't the best minifigures ever but considering you get 16 for $2 dollars, they're easily worth the price of admission. The sculpts are decent though the poses are weird and less impressive. For something that you can just pass out for Halloween treats or use to amass a giant skeleton army, these aren't bad though. They're a Good set and probably worth checking out if you're near a Walgreens and like minifigures.