The Curse of 31 Days of Toy Terror: Jack Torrance #456 from the Shining from POP! Movies by Funko 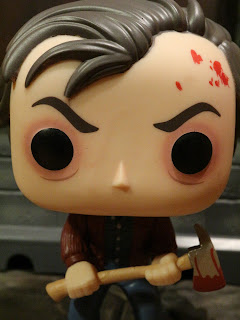 Inspired by the new film adaptation of It, I've been revisiting a number of films based off of Stephen King books this year. So far I've watched both version if It, Misery, and both versions of The Shining. The 1997 TV movie version of The Shining was one of the first horror films I ever saw and the first Stephen King based film I ever watched, quickly leading me to start reading King's novels as well.  The Shining (1997) and Night of the Living Dead (1968) are quite possibly the two films that really got me interested in watching horror movies. Of course, shortly after watching the TV version of The Shining I wanted to check out Stanley Kubrick's 1970 version of the film. I like the 1997 version due to its length, themes, faithfulness of the book, and likeability of the characters. I like Kubrick's version because of its menace. It is absolutely a terrifying, unsettling movie that is filled with bizarre imagery yet still manages to only show you a little bit of what is happening. I just watched it again on Sunday afternoon and it is as good as it always is. I knew that Funko was releasing some POP! vinyl figures based on the film and I absolutely wanted to own a Jack Torrance based on Jack Nicholson's portrayal of the character. Let's check this figure out after the break... 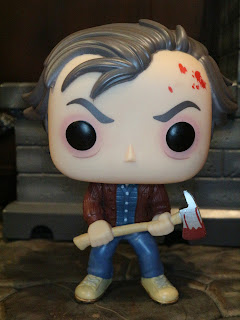 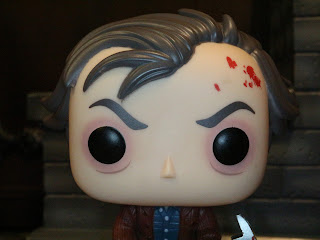 * Jack has one of my favorite POP! likenesses ever. The bruised eyes, the menacing Nicholsonesque eyebrows, and the blood splatter on his forehead really capture the look of the character at his most unhinged. 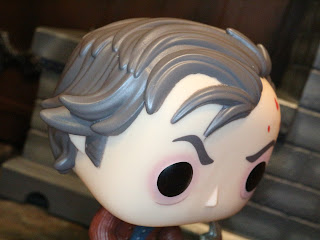 * The hair is also pretty well done. Jack Nicholson has some very unique hair, particularly in the shining, but I think Funko really did a great job of capturing it in plastic. It looks really wild and unruly, as it should. 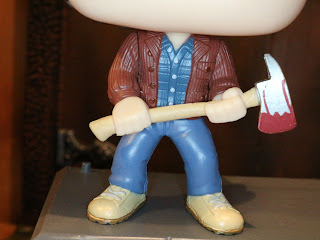 * Jack's outfit is excellent. The detail and texturing, particularly on the red jacket and the blue undershirt, look perfect. This is really nice work in such a small scale. 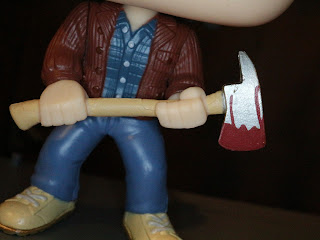 * Last, and certainly not least, Jack Torrance is wielding his axe. Yeah, it's not a roque or croquet mallet like in the book (which seems like a strange choice for Kubrick to have made as the mallet is so much more unique) but it looks awesome and is authentic to the film. 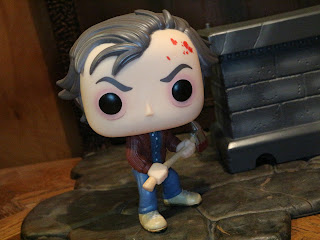 Jack Torrance is one of my favorite POP! vinyls in recent memory. He's a really unique character and the POP! does a spot on job of capturing his madness in 4 inches of plastic. Funko has also released Danny and Wendy Torrance, but they're not nearly as recognizable in POP! form as Jack. There are is a frozen Jack variant as well as an exclusive set of the Grady girls, but they're pretty tough to find and seem to be expensive to procure. This is a Great figure, however, and he stands just fine on his own hanging out on your bookshelf. Now, someone please make Kathy Bates as Annie Wilkies from Misery and give her a sledgehammer! Stat!

This is the only Jack Torrance figure I've reviewed. I have reviewed other POP! Movies figures, though, including: