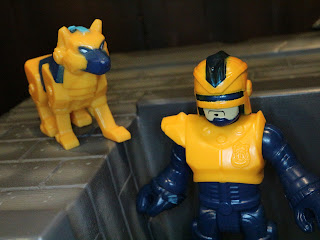 While series 9 of the Imaginext Collectible Figures is starting to trickle out, I just managed to get my grubby paws on series 8. It's been about a year since I reviewed Series 7 which was one of my favorites. Series 8 is a mixed bag for me with fewer figures that I'm super jazzed about. Today I'm starting off with the Future Cop, the Space/ Futuristic themed figure of the series. Like so many of the Imaginext Collectible Figures this figure definitely seems to draw its inspiration from a pop culture character. Looking at this guy you can definitely see inspiration coming from both Robo-Cop and Judge Dredd. Even with that kind of cool pedigree, though, the figure manages to not be as interesting as one would hope. Let's check out the Future Cop after the break... 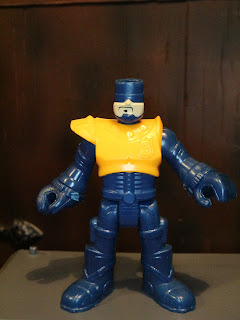 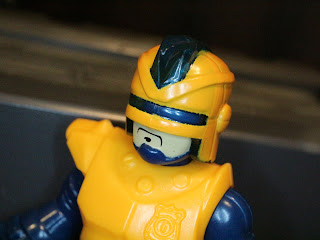 
* The Future Cop's helmet is pretty cool. It definitely looks to be inspired by Judge Dredd and Robo-Cop with a long, thin visor and a design that leaves only the mouth exposed. 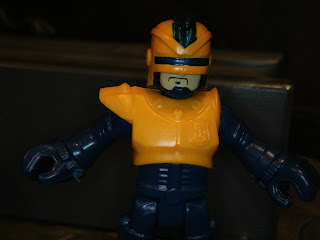 * Another aspect of this figure that reminds me quite a bit of Judge Dredd is the armored chest piece. The extended shoulder pad on the right arm and the large badge on the left definitely seem reminiscent of that character's design and gives off a cool vibe. I'm not wild about the bright yellow (maybe a more bronze/ gold color would have been better)? 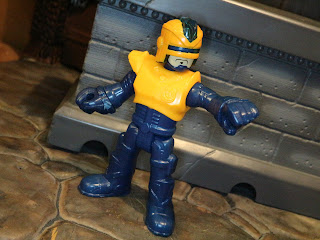 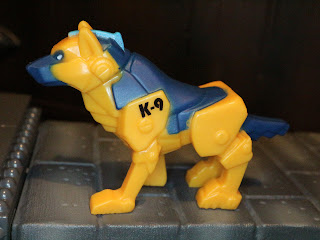 * The robotic K-9 unit is really cool. He's not articulated but he has a great sculpt and a nice paint job that seems to look like a cross between Bumblebee and a German Shepard. 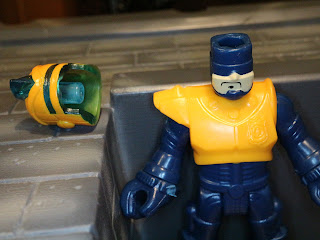 
* The Future Cop's helmet is removable. Unfortunately, it doesn't really reveal anything cool underneath. It just looks kind of weird when it could have been a very cool feature. 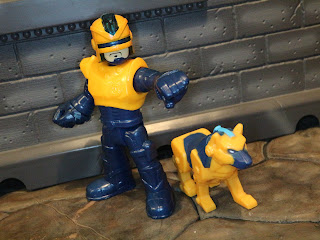 The Future Cop is a Good figure, but he comes off as a bit duller. I love the K-9 companion (I'm all about dogs and robotic dogs) and the concept but the colors really don't do this guy any favors. Maybe if he'd had something cool under the helmet or a weapon of some sort, but this guy is just rather plain. I'm sure folks will dig the dog but that's about it.

If you're looking for more Imaginext reviews, check out the following: