The Curse of 31 Days of Toy Terror: Martian Trooper from Mars Attacks! by Trendmasters 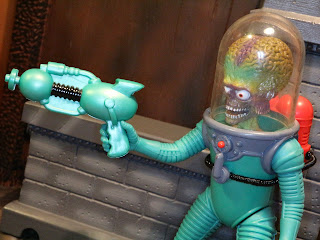 While there definitely are some Halloween tales involving alien lifeforms, Tim Burton's Mars Attacks always makes me think of Christmas. Christmas of 1996, to be exact, as that was the year that Mars Attacks was released and kind of dominated my attention for a few months. I'm not going to call it a renaissance, but there was definitely a period between 1996 and 1999 when big budget, high-profile sci-fi films had a major revival. Perhaps this was due to a combination of the success of Independence Day in 1996 and the anticipation of Star Wars Episode 1: The Phantom Menace in 1999 but, within the span of a few short years, there was an increased sci-fi presence in theaters. Lost in Space, Godzilla 1998, The Fifth Element, Men in Black, and Mars Attacks all stand out to me because they were all released while I was in middle school and helped to scratch my newly awakened sci-fi itch. While their quality varies and my least favorite of the group at the time has since become my favorite (The Fifth Element), there is definitely a nostalgia attached to these films for me. And, of course, isn't nostalgia one of the things we love about Halloween? There's something powerful about having the chance to once again be scared of the dark, dress up, and revisit some of the things of our youth. Mars Attacks definitely feels nostalgic to me and I'm excited to share with you just one more piece from my Mars Attacks collection: The Martian Trooper. While the Martian Spy Girl might have been the most memorable part of the movie (other than Tom Jones), the standard Martian Troopers are certainly the most recognizable. Released by Trendmasters in late 1996 (the toy company who had a monopoly on many of these sci-fi movie properties), the Martian Trooper was part of a fairly expansive action figure line comprised of figures, vehicles, and role-play toys from both the film and the Topps comic book series. Maybe he's a little more silly than spooky, but the Martian Trooper is the perfect fit for some Hokey Halloween Horror! More Martian fun after the break... 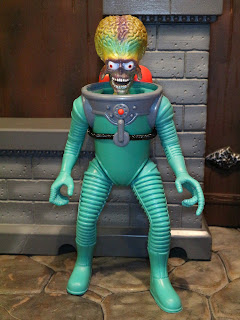 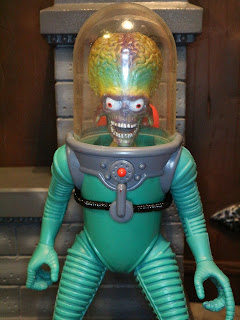 * Considering how outlandish the Martians look, I think Trendmasters did an admirable job of capturing their appearance. This isn't the kind of character design that a modern company would be able to do much more faithfully, you know? This guy still holds up well thanks to his very retro inspired design. 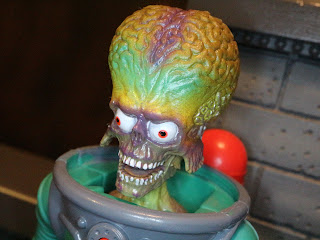 * The headsculpt and paintwork is really good. I feel confident in saying that while it may not compare to the best of what's available in stores today, it certainly is better than much of what you'll see. 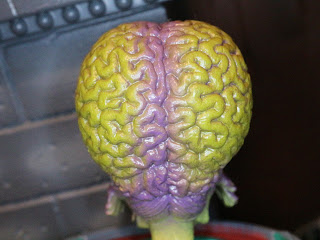 * The work on the brain-like Martian head is amazing. I love the detail and the sharp green and purple paintjob. 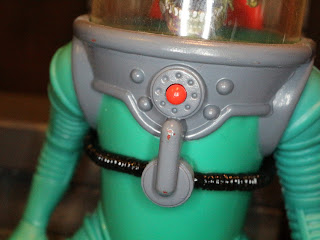 * Trendmasters was well know with adding light and sounds to their action figures and the Mars Attacks line put sound to good use by giving the Martians voices. The Martian Trooper says two different phrases: Push the button to hear either the infamous "ack ack ack!" Martian dialogue or a translated "Destroy Earth!" I'm proud to say that while having owned this figure for going on 21 years, the batteries still work. Still! 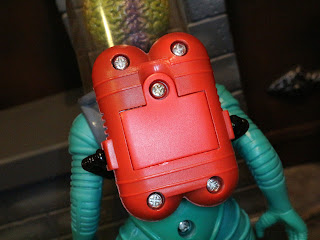 * Not only does the Martian Trooper have the slick red backpack on it's back but it also serves as the battery holder for the voice feature. 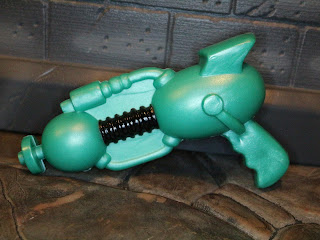 * The Martian's ray blaster may be quite a bit oversized, but it is a cool looking pistol. 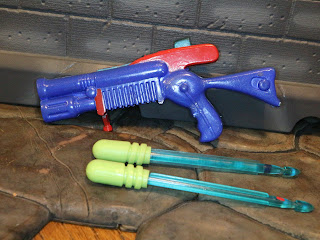 * The Proton Ray Blaster is probably supposed to be one of the main ray guns used in the film but it definitely has a unique look and feel. It fires two missiles and launches them a pretty respectable distance. 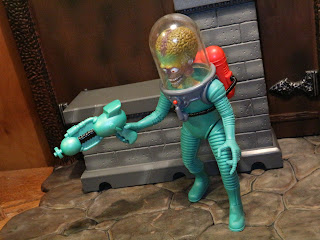 * The standard five points of articulation included here are not out of the ordinary for the time and can't really be considered to be a negative. The fact that the Martian is sculpted in somewhat of an action stance is a bit of a negative, though, as it requires really utilizing one of the weapons to balance the figure so it can stand. Otherwise, it tips over like someone just played Slim Whitman's "Indian Love Call." 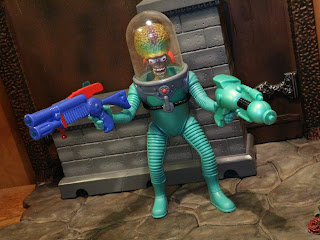 It's tough to separate the nostalgia for a toy you've owned for 20 plus years from the actual quality of the product but I really think that Trendmasters' Mars Attacks! line offered up some pretty slid toys, with the Martian Trooper being one of them. He still looks good, has a great functional voice feature, and some fun accessories. He's not the best toy ever made but he's definitely an over-looked gem from the mid-late 1990s. For the price of the figure, both then and now, I don't you could disappointed.


If you're looking for another Mars Atacks! review, I also reviewed the Martian Spy Girl a few years back.