The Curse of 31 Days of Toy Terror: Sam from Trick 'r Treat by Mezco 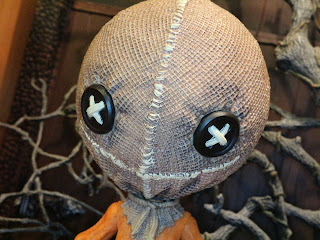 This year I'm starting off The Curse of 31 Days of Toy Terror with a bang. Well, more like with a sharp rap on the door on a cold Halloween night followed by some menacing terror! Boils and ghouls, today we're looking at the new Sam figure from Mezco. It's very tough for me to name with my favorite horror film but if I were doing a short list of my top ten, it would be a guarantee that Trick 'r Treat would be on it. It's a film that I was really anticipating throughout it's tumultuous release cycle and I've loved it ever since I first was able to see it on DVD. It's a nearly perfect horror film in my mind as it features a delightfully frightful mixture of legitimate scares with comedy, great performances, memorable characters, an incredible atmosphere, and just the right blend of nostalgia. Plus, it actually takes place on Halloween! I find the film to be infinitely rewatchable and I make sure to view it at least once every Halloween season. Today I'm checking out Mezco's very stylized Sam figure whom I received as a birthday present. I'm not usually a fan of figures that are heavily stylized like this but I make an exception for Sam as he's such an incredibly well designed character. Plus, I have a cool shelf of pumpkin headed characters just because I love them so very much. I mean, look at the pictures of me to the side of this page. Y'all know how I roll! Let's start things off with this super spooky Sam figure after the break... 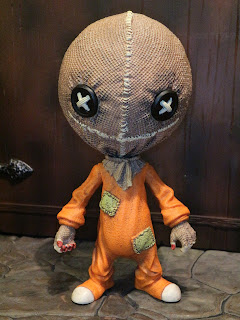 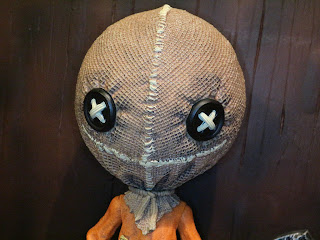 * This headsculpt is amazing. While the figure only features Sam's burlap hooded head rather than his true visage, this still has so much character. It's also his most recognizable appearance, too. The level of texture and detail on the burlap, stitches, and the sting holding the button eyes on is incredible. 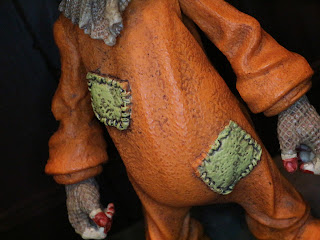 * Sam's orange footy pajamas look suitably dirty with a nice layer of grime. There also some very nicely detailed patches on the front and a flap in the back. 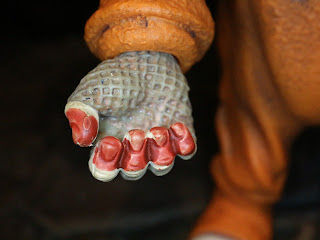 * Sam seems to be wearing fingerless burlap gloves that show off his bloody fingers. The sculpted detail and the bloody good paintjob really elevates this figure to the next level. 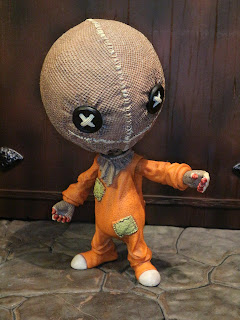 * Sam is definitely not a very figure made to be posed. He only features five points of articulation and they're designed more to help you give the figure a bit of life while on display. He does stand quite well, though, with oversized feet that keep him firmly planted on your shelf. 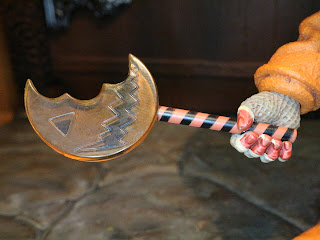 * Same includes two accessories, the first of which is his pumpkin shaped lollipop with a large bite missing from it. This thing can be deadly if used right and Sam seems like just the right.....pumpkin kid to wield it. The translucent orange of the lollipop is much more vibrant in person than my camera could capture. 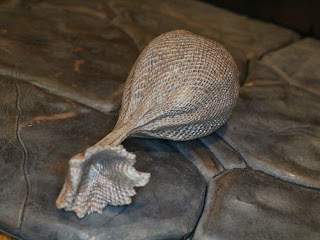 * Sam also includes his infamous trick 'r treat bag. What's in it? Who knows? There seems to be just a spattering of blood on it, though, so be careful. 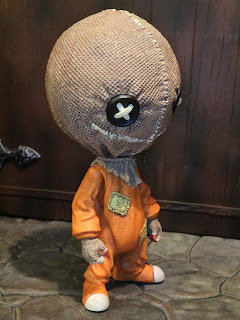 
* This is less of a negative and more of just a reminder, but just keep in mind that Sam definitely has a limited level of movement. I really wish he's had some elbow joints to help pose him a bit more, but he's more akin to a display piece than something intended to be played with and reposed. 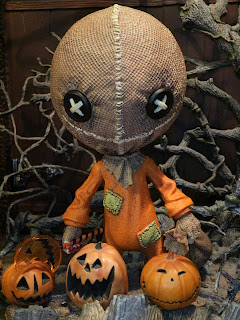 Being a huge fan of Sam, I knew I had to have this figure. It's a really nice piece. The paint and sculpting design are incredible and really show off Mezco's fine work. It's also quite affordable, particularly when you consider what else you can pick up in the $20 dollar price range. While I would have loved to have seen another accessory or two (the razor blade candy bar or a flaming pumpkin would have been nice) or an unmasked head, this is still a pretty cool collectible. I'm sure there are others like who like to collect Sam stuff now, just like there are plenty of folks collecting merchandise of Jason Voorhees and Freddy Krueger. Despite having only been in one film, Sam has made his mark on horror fandom.This is a Great piece that's sure to add a little Halloween fun to your desk or home this season!