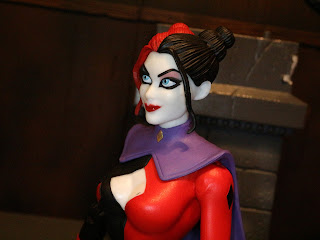 I'm going to state two things that sound contradictory, but that are not! First, the Amanda Conner subset of the DC Designer Series has been one of the most disappointing lines of 2017. Second, Superhero Harley Quinn is one of the best looking figures of the year. I think the issue here is that DC Collectibles couldn't decide what this line was supposed to be and mixed too many concepts together. For years, DC Direct did release plenty of beautiful (and often fragile) figures that looked amazing, functioning more like small statues than traditional action figures. Over the past few years, though, DC Collectibles has been releasing some excellent "action figures" that featured cool accessories, and solid, sturdy articulation. This series seems to be DC Collectibles trying to find the middle road between those two approaches and it just doesn't work. I'm so conflicted by that, too, because this is an incredibly sculpted figure! It seems like it should have been impossible for DC Collectibles not to have made this Harley Quinn focused series anything less than incredible. Let's see what went wrong and what went right after the break... 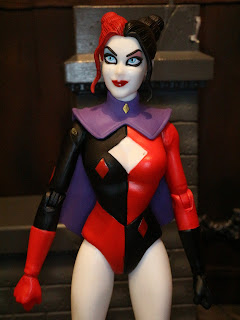 * First among the positives is the sculpt. I love Harley's superhero costume. It's incredibly well designed with an amazing color palette. I love that short purple cape, too. 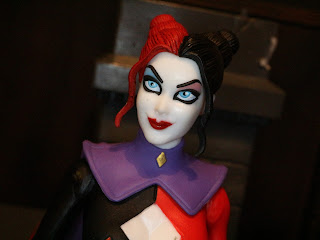 * This might be one of my favorite headculpts of the year. Sculptor Paul Harding is amazing at capturing different Harley expressions but this one just may take the cape. The eyes on this one are just perfect! 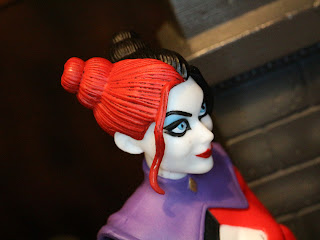 * The hair is really impressive, too. I just want to point out how awesome both the sculpted details, the overall style, and the paintwork combined make this figure look. 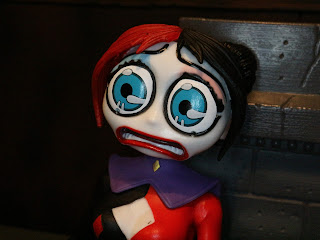 * This Harley figure also comes with a super anime influenced crying head. This is a pretty funny accessory that gives Harley a look that will help her to stand out from every other figure on your shelf. I haven't tried it, but the figure also "cries." Dip it in water, squeeze the hair buns, and Harley will let loose some tears. I do think the action features on these figures are pretty funny and definitely add some amusement, even if you don't plan on using them. 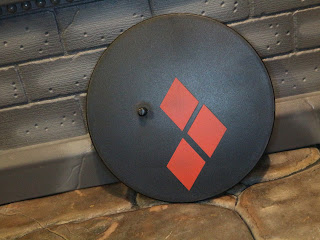 * It has been quite a few years since DC Collectibles included display bases with any of their action figures, so it's nice to see a set doing it again. I love the inclusion of the display stand. It's simple but painted with some Harley diamonds, so it suits the figure well. 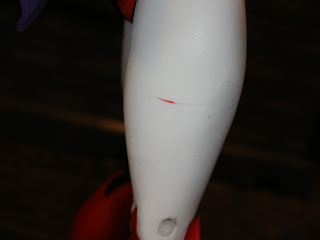 * My Harley has a couple of errant paint marks on her. This red spot is on her outer right thigh while there is also a bluish/ black spot on her chest. 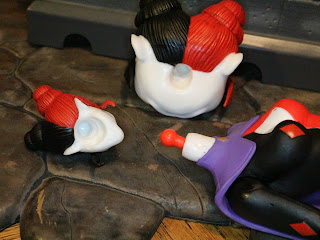 * When one of the features of the figure is having interchangeable heads, you think that swapping out the heads would be easy. Not here, friends. You are going to have to yank at this figure until your knuckles turn blue or use the old boil and pop method to get the standard head off. Frustrating! 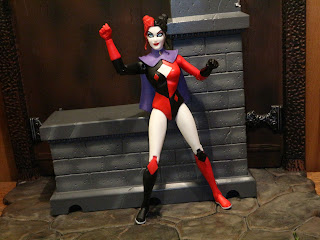 * The articulation here is really odd. There's definitely a decent selection of joints, but they feel very stuff and restricted. There's not the needed articulation for the figure to be super fun to pose and play with, but there's too much articulation loose ankles keeping the figure from being an incredible display piece that keeps wanting to tip over. Again, it feels like DC Collectibles was trying to compromise on this one and it didn't turn out well. 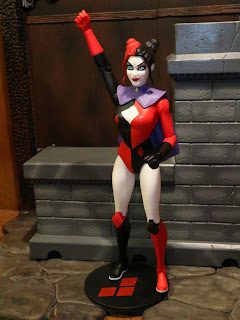 It really is hard for me to not love this figure due to the excellent character design and the beautiful headsculpt, but I really this it is a very flawed piece. It's tough to keep standing and difficult to swap out the heads, something the figure encourages you to do as a feature. Factor in the paint slop on mine and I'm very mixed. This is a Good figure with an epic Headsculpt, eh articulation, and a cool gimmick that takes a crap ton of strength to pull off. I wish DC Collectibles would stick to doing beautiful mini statues or full-on action figures, as this half and half thing just isn't working.


I've reviewed so many Harley Quinn toys that she now has her own review index. Check it out!

If you're looking for more DC Comics Designer Series figures, check out the following: