The Curse of 31 Days of Toy Terror: Pumpkin King from The Nightmare Before Christmas by Diamond Select 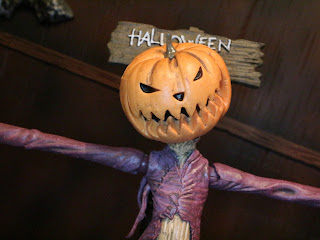 Happy Halloween!  Did you have a great Halloween season thus far? I did! Man, having a four year old had mad this season so much more fun than I ever imagined! While my Halloweens have went from non-stop terrifying horror film, trips to haunted houses, and super scary costumes, to more kid friendly events, the changes have been worth it (now those things still happen, just at different times and less frequently). One of the things that still is a staple of the season for me is the Nightmare Before Christmas. It's been part of Halloween for me since I saw the film in theaters in 1993 and its a favorite of me, my wife, and now my little one, too. I have a deep love for Jack Skellington in his Pumpkin Guise and I knew I wanted to pick up this action figure and review it for Halloween. I've been watching Diamond Select's The Nightmare Before Christmas line and I'm finally convinced that they'e going to go deep enough in the line and release enough characters to make it worth collecting. I collected most of NECA's offerings from their 2002 line and Diamond now seems to be establishing their line as a worthy successor. Let's jump in for some frightful fun with Jack the Pumpkin King after the break... 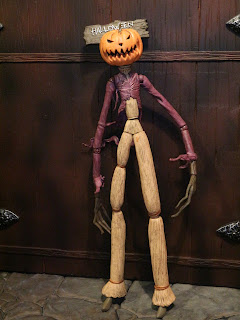 Accessories: Torch, flame, display stand, and fountain spout for the build a diorama. 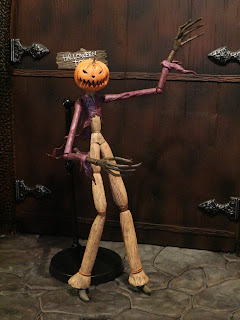 * Jack is a tall, spindly character and a number of different toy manufacturers have had difficulty articulating him and keeping him from being overly breakable. From the waist up, Diamond has ton a fairly good job. Jack the Pumpkin King's arms are well articulated and the double balljointed on the head is excellent. 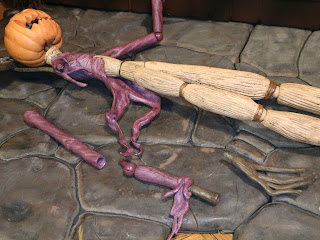 * Don't worry! He isn't broken! Instead, Jack features joints that easily slide out of the sockets, possibly to help prevent breakage. If the joint is forced it's much more likely that it will pop out of the socket rather than breaking. This is probably a smart design choice. I still remember how fragile the NECA Jack Skellington figures were. 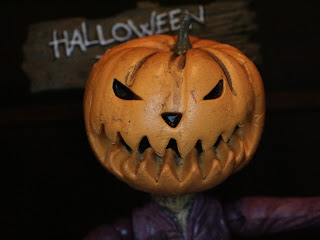 * The Pumpkin King's headsculpt is excellent! The paintwork and sculpt work together beautifully to craft a very frightening visage! 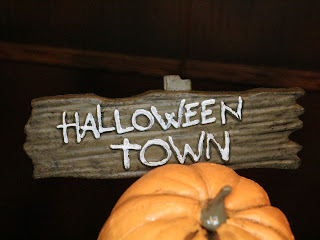 * Before his role as a burning effigy, the Pumpkin King starts off appearing like a scarecrow/ road sign. It's fitting then, that the Pumpkin King has Halloween Town sign on his back. The sculpting and wash on the wooden sign looks particularly nice. 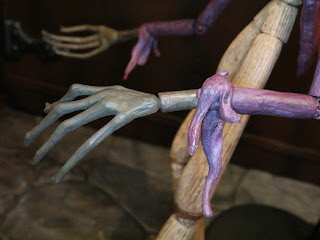 * Not only did Diamond capture Jack's long, spindly fingers but they also did some nice work recreating his ripped sleeves. 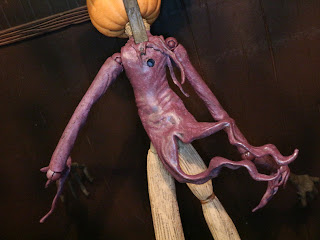 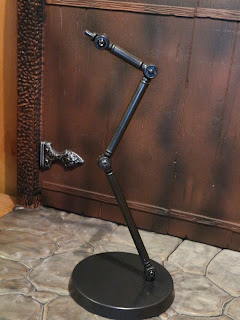 * Since Jack's design largely prevents him from being able to stand up on his own unassisted, Dimaond has included stand with an articulated display arm. The stand features four points of articulation and nicely allows Jack to take a few different poses. Metal screws in the joints allow you to tighten the arm a bit more to retain poses that require more weight on the stand. 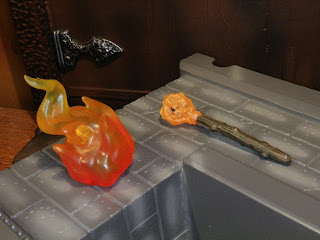 * Included with the Pumpkin King is a torch. It's a great looking accessory and includes a large, translucent flame that can be placed over the torch to give it a different appearance. One look is a freshly lit torch while the other is a roaring blaze of fire! 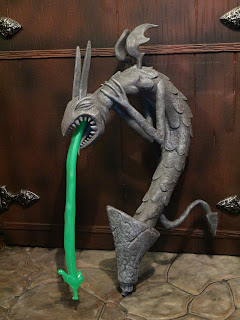 * Six different figures in this line (Pumpkin King, Dr. Finkelstein, Santa Jack, Santa Claus, Zero, and Behemoth) all include pieces to build the town square fountain. The Pumpkin King includes the coolest piece: The demon shaped spout spewing green liquid. I'm actually excited to build this piece and it's sold me on picking up these figures, so good job Diamond. Once I build this I'll review it separately. 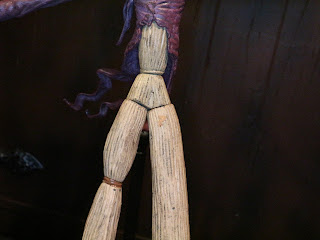 * Jack's arms might be well articulated but his lower body is pretty stagnant. He has swivel thighs but no hip joints, meaning he can't really do much of note with his legs. What a waste! 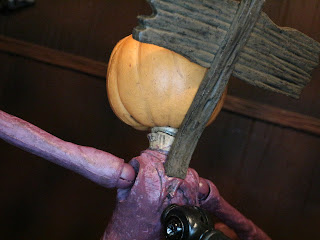 * I really wish the Halloween Town sign were removable. It blocks the movement of the Pumpkin King's head and keeps him from being able to hold his head at a completely normal angle. 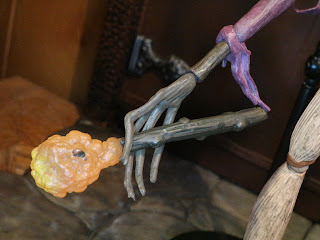 * I really had to stage this shot quickly because there is no good way for Jack to hold the torch. He holds in in the film so there's absolutely a reason you'd want him to have it (meaning this isn't just meant as a prop or an item for another figure). This would have been an ideal place for an interchangeable hand molded grasping a torch. 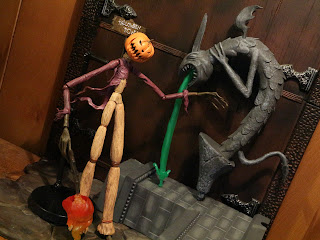 I'm an absolutely fan of the Pumpkin King and there was no way I wasn't picking up this figure. He's very, very good but he's definitely not perfect. I can understand why Diamond Select Toys made some of the decisions they did in choosing the articulation scheme for Jack, but it still seems strange how limited his leg movement is due to the lack of hip joints. The sculpting and paintwork is all top notch, though, and I have a feeling that this guy will look amazing when paired with the fountain. He's a Great figure and a fitting review for Halloween!

If you're looking for more Diamond Select Nightmare Before Christmas figures, check out my review of Oogie Boogie (Toys 'R Us Edition).