The Curse of 31 Days of Toy Terror: Mad Gasser of Mattoon from Monster in My Pocket by Matchbox 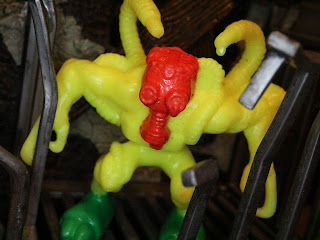 Today I'm checking out another Monster in my Pocket figure from the fourth series (also known as the Super Scary Series) that is extra special because it's a toy I've owned since I was a kid: The Mad Gasser of Mattoon! Like so many Monster in My Pocket designs, the Mad Gasser of Mattoon is based on a character who may or may not have actually existed. The Mad Gasser is supposedly responsible for a series of gas attacks involving random people smelling noxious fumes in their homes in Botetourt County, Virginia in the early 1930s and Mattoon, Illinois during the wartime years of the 1940s. It's a creepy story, especially when you consider the Mattoon, Illinois attacks that seemed to happen largely to women whose husbands were away in World War 2. Let's take a look at this creepy minifigure based on an urban legend or possibly real assailant after the break... 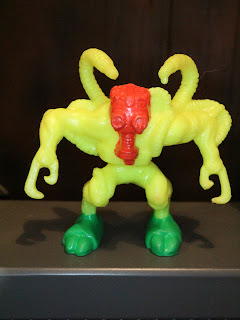 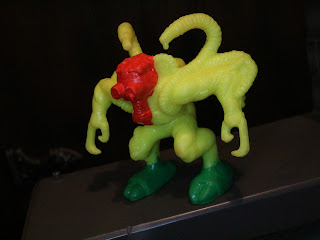 * While reports of the Mad Gasser of Mattoon described a tall and thin man or a woman dressed to resemble a man, Matchbox went with something distinctively nonhuman. Instead of hands and feet he appears to have some sort of pincers and cloven hooves. He's also wearing a very old fashioned gas mask. Since the Super Scary Series utilized different colors to highlight some details, the hooves are green while the gas mask is red (although different paint variations do exist). 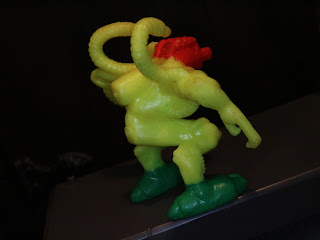 * The Gasser's legs are also absolutely not human. They look more animal-like, giving the Mad Gasser of Matton an alien appearance that looks like something out of a Guillermo del Toro film. It's a pretty cool design! Rather than a pesticide gun the Mad Gasser has a tank affixed to his back and two tubes hanging loose above his head. It's unclear whether these are intended to be nozzles to dispense gas or are supposed to be the tubes for an oxygen tank on his back that are meant to "connect" to the gas mask. 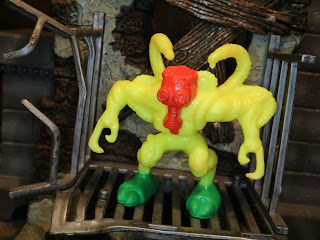 Monster in My Pocket had some really strong designs and the Mad Gasser of Mattoon is one of my favorites. The only real negative I can give this guy is that, like most of the Super Scary Series figures, the Mad Gasser's plastic has tended to get a bit sticky over the years. Otherwise, this is a great minifigure based on a fairly obscure occurrence. He's a Great and a 1/2 minfigure and one well worth tracking down.