The Curse of 31 Days of Toy Terror: Steppenwolf from DC Comics Multiverse: Justice League by Mattel 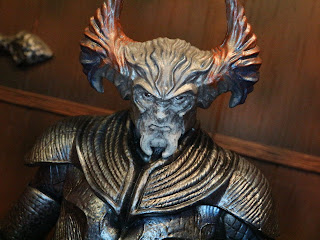 Today for The Curse of 31 Days of Toy Terror I'm looking at an intergalactic evil from the world of Apokolips: Steppenwolf! It took me around two months but I have finally been able to complete Steppenwolf, the "Collect & Connect" figure for Mattel's Justice League inspired series of their DC Comics Multiverse line. While thus far only appearing in a scene in the Batman v. Superman Ultimate Edition, Steppenwolf is slated to be the main villain in the upcoming film. As a huge fan of Jack Kirby's DC work, particularly the Fourth World storyline, I'm pretty excited to see one of the New Gods get a chance to rock the silver screen. While Steppenwolf looks rather different from his classic Kirby designs (he looks more in line with his modern appearances), there is definitely something about him I like that seems a bit unusual. Of course, seeing him in motion and context will be the real determining factor as to how successful of a villain he is for the DCEU. While we'll have to wait a month to judge that, we can take a look at this figure right now! Let's check out Steppenwolf after the break... 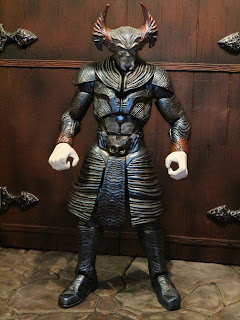 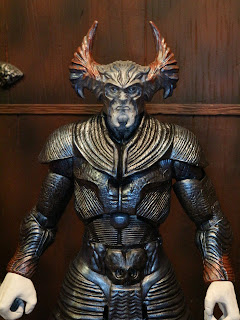 
* Steppenwolf is a pretty impressive looking figure. He does have some colors and design choices that are very similar to Ares, though, which is kind of odd. Have we gone from large beams of blue light to large guys in metallic blue armor? Heck, both actors (Ciarán Hinds for Steppenwolf and David Thewlis for Ares) portraying these villains have also been in Harry Potter films. Coincidence? Maybe!!! Anyways, Steppenwolf certainly looks the part of a mythical, cosmic general. He also kind of looks like Standor from Masters of the Universe Classics. Another Stan Lee and Kirby connection! Definitely more fearsome than Standor, though. 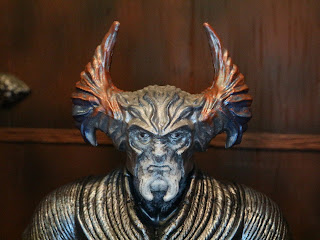 * The headsculpt on Steppenwolf is good. really good, actually. This guy looks pissed. he's very statuesque, which I kind of dig. The paintwork is impressive, too. This is easily one of the best Multiverse portraits we've seen yet. I hope this is what the character actually looks like in the film as it's a cool look. 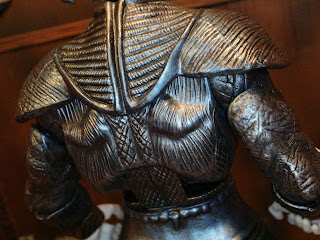 * The armor is very nicely done with some very rich, detailed sculpting and a great paint job to give everything a metallic sheen. The armor is very cool as while it looks like it's made of metal (with a variety of chinks and dents in it in places), there are portions of it that also appear to be organic. Doesn't the back almost look like musculature of some sort? 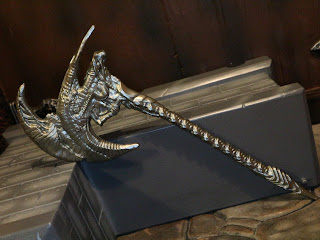 * Steppenwolf's ax is pretty cool, too. It's quite large and very wicked looking with some excellent details on the blade and the shaft. 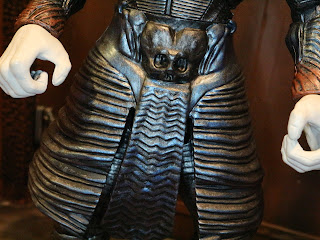 * I like the design of Steppenwolf's robe but the details look very, very soft on it, particularly the belt buckle design. 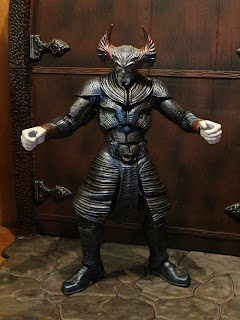 * Steppenwolf's articulation is kind of weak. He has every joint that most Multiverse figures have, but the shoulder pads and the skirt really restrict the shoulder and hip motion. fairly significantly. He's a sturdy, well made toy, but he really cannot take very many good poses. 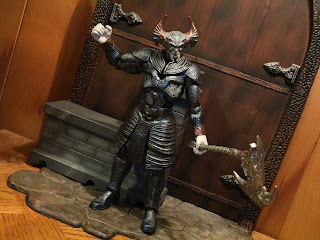 Having Steppenwolf assembled, he certainly looks impressive but his lack of articulation and accessories makes him seem a bit weaker than other Build-a-Figure releases. Thus far I haven't seen any confirmation that any of the upcoming exclusives will include alternate parts or accessories for Steppenwolf unlike previous Multiverse BAFs like Ares, Killer Croc, King Shark, and the Grapnel Blaster, so this might be all we get (Toys R Us is supposed to have an exclusive Parademon, so we'll see what he includes). Steppenwolf is a Good and a 1/2 figure and you'll have to pick up a few pretty weak figures to build him, too. I have to admit that Mattel's Justice League offerings have thus far been very disappointing. Hopefully the exclusive figures coming soon (Parademon, Mera, and the Wal-Mart exclusive Cyborg and Batman) are much better.

I haven't reviewed any other Steppenwolf figures on the site but I have reviewed many other DC Comics Multiverse figures, including: