The Curse of 31 Days of Toy Terror: Chucky from Child's Play 2 from POP! Pocket Keychain by Funko 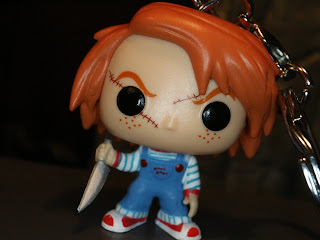 A few weeks ago I actually sat down and watched Child's Play. Strangely enough, I had never seen it before and I definitely think it was pretty good. I remember watching one of the Chucky movies at some point as a young teenager (Bride of Chucky, probably) but it didn't leave a big impression on me. The original Child's Play is a really good movie! I enjoyed it so much that I decided to go out and track down Child's Play 2. While at Wal-Mart "grocery shopping" I stumbled upon a DVD set called Chuck: The Killer DVD Collection that includes Child's Play 2, Child's Play 3, Bride of Chucky, Seed of Chucky, and this little POP! Pocket Keychain that I'm reviewing today. The set only cost $15 dollars which isn't bad for four movies and a POP! keychain. Let's take a closer look at the reigning king of killer dolls after the break... 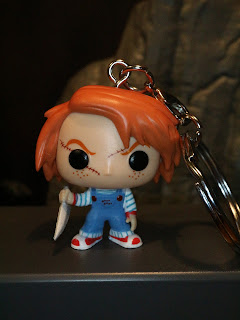 Non-Scalper Price: Included with four movies as part of the Killer DVD Collection for $15 dollars or sold on its own for $6-$8 dollars. 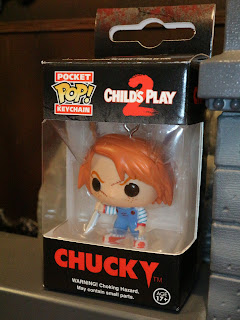 * Here's what Chucky looks like in the package. As you can see he seems to be exactly the same as the standard Chucky keychains sold separately. The DVD and the boxed keychain come packaged in a larger box. 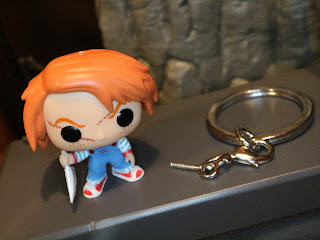 * So one of the things that I consider a plus is that the keychain is completely removable from the figure. Now it's a very solid looking keyring, don't get me wrong, but I definitely much prefer a little mini Chucky POP! rather than a keychain. Just unscrew the keychain and you'll have a little POP! with just a tiny hole in the top of the head. 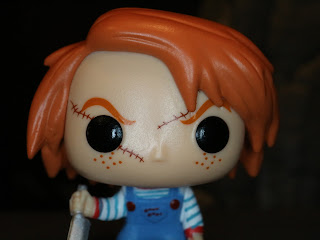 * The face sculpt and paint is excellent here. The hair looks great, as do the various scars and freckles. 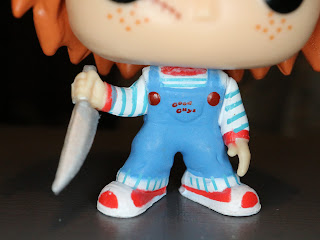 * Chucky's outfit is pretty nicely detailed with very clean paint; very impressive considering this guy is under 2 inches tall. The "Good Guys" label is even neat and legible. 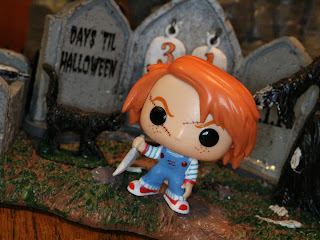 I really like this little Chuck. As a keychain he is OK but as a mini POP! included with a DVD set he's excellent. He looks great and makes sense as a smaller POP! (you know, he's only a fraction of the size of a normal person). Heck, I might even stick him with my ReAction Horror Series figures. He's a Great little extra and I'm digging him.


I haven't reviewed any other Chucky figures or POP! Pocket Keychains on the site. I have reviewed plenty of other horror toys during the 31 Days of Toy Terror each year, which can all be found here!