The Curse of 31 Days of Toy Terror: Woodland Mystic from Imaginext: Collectible Figures Series 8 by Fisher-Price 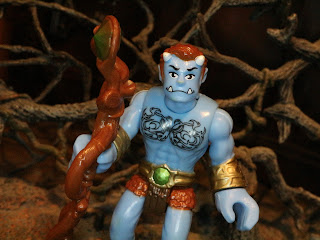 For today's installment of The Curse of 31 Days of Toy Terror I'm looking at the sixth in Imaginext Collectible Figures Series 8: The Woodland Mystic! Imaginext has included a number of mythical and fantasy characters in the blind-bagged line including the Gnome, the Genie, and the Cyclops and the Woodland Mystic is the newest member of this subset. Seemingly inspired by the mythical satyr, the Woodland Mystic features short horns, hooves, and blue skin. He definitely looks like a D&D character and despite him not being terribly terrifying, I definitely think he has a place in 31 Days of Toy Terror, don't you? Let's take a look at the magical Woodland Mystic after the break... 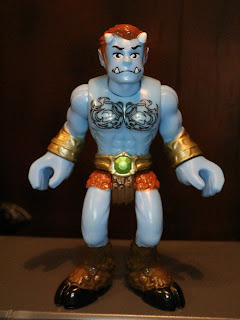 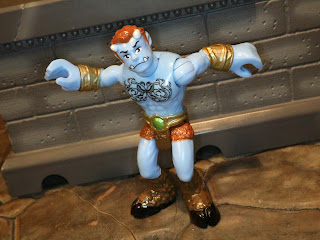 * I'm always happy with the quality and the articulation on these little guys. While they're only about 2 7/8ths inches, they remind me a lot of some of the various toylines of the 1980s and 1990s or Playmobil due to the random character selection, the durability, and the accessories. 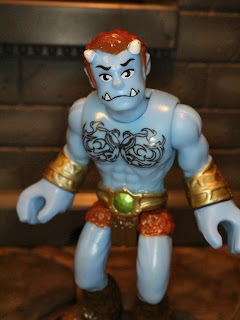 * The Woodland Mystic is a very cool figure. In terms of just the appearance (and not factoring in the sheer insanity of the Pizza Chef) the Woodland Mystic is easily the best figure in this series. A nice, very unique sculpt and some great paintwork really help this guy stand out from the pack. The headsculpt is fantastic, particularly the small horns and the cool bejeweled loincloth. 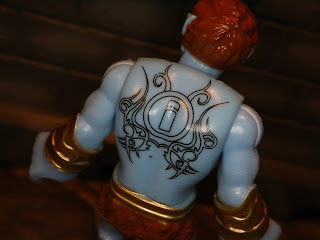 * The Woodland Mystic's tattoos are also pretty impressive. The printing is extremely neat. I also dig how the Woodland Mystic is sporting the Imaginext "i" logo. It's a neat way of working the image into the figure's design. 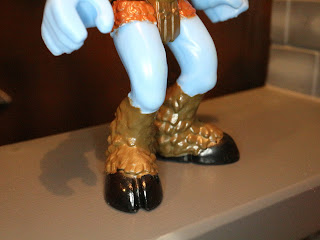 * I gotta give some major props for the furry hooves this guy is sporting, too. They look great and definitely differentiate this guy from most other Imaginext figures. 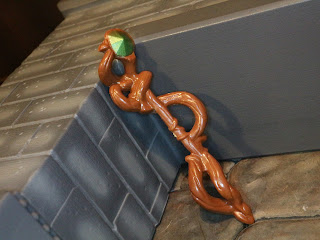 * The Woodland Mystic only includes one accessory but it's a good one: A very gnarled wooden staff with a green gem in the top. It's a great accessory and really fits this figure's theme as some sort of druid or shaman. It also somewhat resembles one of the serpent staffs from the Masters of the Universe Snakemen. 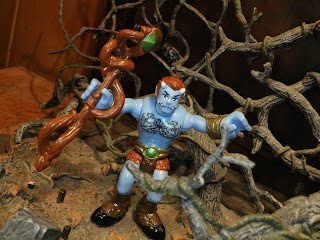 The Woodland Mystic definitely is one of the strongest figures in the line. If it weren't for the utter absurdity of the Pizza Chef, he'd easily be number one. As it is, the Woodland Mystic is a Great and a 1/2 figure. While there isn't currently an ongoing Imaginext fantasy theme, there was one a few years back that this guy would integrate nicely with. Of course, he could also pal around with the current adventure theme or be used as a stand in for Blue Devil in the DC line. He's both fun and versatile!