The Curse of 31 Days of Toy Terror: Gillman from Big Bucket of Monsters 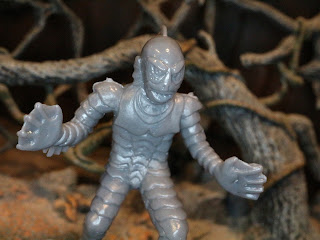 Today it's time for a visit from one of the classic monsters: The Gillman! Often referred to as the Creature from the Black Lagoon, too, the Gillman has definitely stepped to become one of the classic Universal Monsters. Of course, this isn't an official Universal Monsters product but just a generic Gillman. Still, we know who he is, don't we? He's another minifigure from the Big Bucket of Monsters and another worthy addition to this years festivities during the 31 Days of Toy Terror. Let's dive in and check him out after the break... 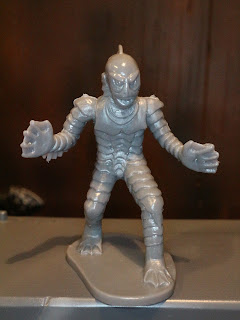 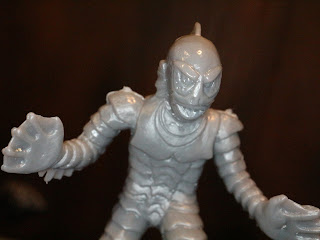 * The sculpt on this guy is excellent. This is an incredible looking Gillman covered in slimy scales. The face is pretty creepy, too. These figures are cast in a much sturdier, harder plastic than many minifigures, so the detail is nice and crisp. It would have been awesome if this guy had been cast in green plastic, though. 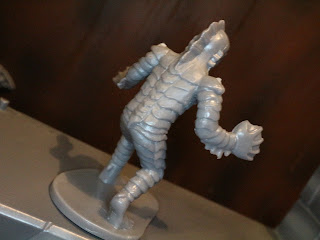 * The pose on the Gillman is really good. Due to the outstretched arms, the bent over posture, and the raised rear right foot, it actually looks like he's in the middle of stalking his prey. It's a cool design and one that makes this seem like a very dynamic minifigure. 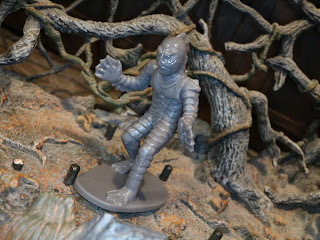 The Gillman is definitely one of the best figures in the Big Bucket of Monsters. The sculpt and the pose are exceptional, particularly for a 2 1/4 inch minifigure. He's one of my favorites and is an Epic part of this little line. These spooky beings are really fun and well worth picking up. You could even purchase a bucket of these from Amazon and give them out as treats on Halloween. That's be pretty cool, right?

I've reviewed plenty of other Gillman like creatures including the Wavecrawler from Hasbro's Kre-O line, the Imaginext Gillman, the Creature from the Black Lagoon from Monster Force, and the Swamp Creature from Lego Monster Fighters.

For more Big Bucket of Monsters figures, check out the following:
Dracula
Godzilla
Restless Ghoul
Posted by Barbecue17 at 10/16/2017