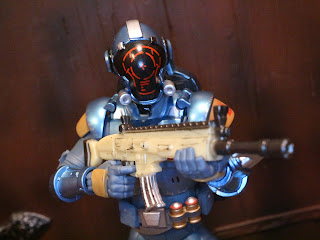 It's been about a month since I last reviewed a figure from Jazwares' excellent Fortnite: Legendary Series but I'm getting ready to go through a mini streak and review a couple more. Seriously, I should finish off this series soon. I really like these! 2019 has been the year of surprising video game figure releases from games I just don't play and Jazwares has really put out some great product with this line. The Visitor is probably my favorite figure from this series as not only does he have an incredible look but his accessories make him insanely fun to play with. I've heard folks mention that he may be intended to be a tribute to Boba Fett and Jango Fett but I tend to think he looks more like a blue version of Bane Malar or the Guavian Enforcer. Seriously, though, even if you're not a Fortnite fan this guy would make a pretty good random bounty hunter to hang out with the Star Wars: The Black Series crew. The Visitor outfit is a Legendary outfit from Season 4 of Fortnite and that's about all there is to it so far as I know. You can make up anything you want about this guy, though. Let's check him out after the break... 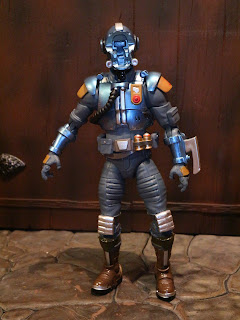 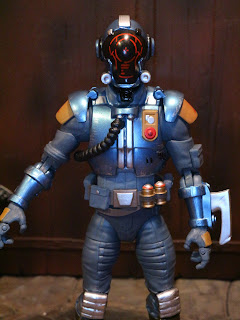 * I love, love, love the look of this guy. So far the Fortnite: Legendary series uses a unique sculpt for every figure in the line and the Visitor's is perhaps the most unique of them all. I love his outfit and all of the cool little extras all over it. The Visitor definitely reminds me of a Star Wars bounty hunter; it's probably due to the worn and weathered armor, the cool color scheme, and the various pouches, tubes, and pieces of ammunition stored on his costume. The paintwork is excellent here and looks nearly as good as the McFarlane Fortnite figures. 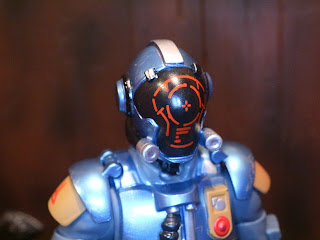 * Rather than having interchangeable face plates like the other figures in the series, the actual visitor of the Visitor's helmet swaps out. There are four interchangeable face plates and the first one (and my favorite) is called "Crosshair." It's a cool red and black design that looks like a targeting system. While futuristic, it also kind of has an 80s vibe with the red and black HUD aesthetic. Heck, it also makes me think of the Virtual Boy. And now I have a headache! 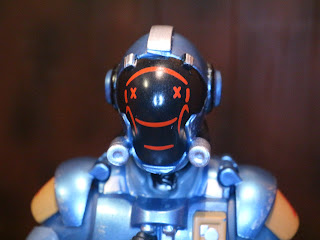 * The second faceplate is called "Smiles" and it looks like, as you may have guessed, a smiley face. These stay on nice and tight, swap easily, and definitely look better than the standard face plates on most figures in the line. 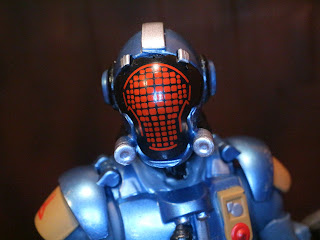 * My second favorite face plate for the Visitor is called the "Visualizer." It's another face plate that kind of reminds me of something you'd see in a 1980s sci-fi film. It looks like something that the Visitor would use to track a number of targets across a cool, grid-like system. 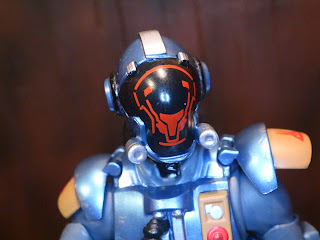 * The fourth and final face plate is called "Mandible" and it sort of has an insect-like appearance to it. 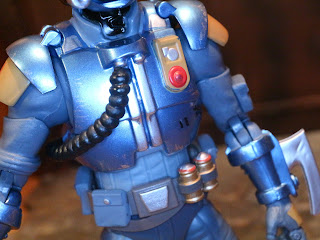 * Here's a closer look at the sculpted details on the figure's torso. The belt is a separate piece (though not removable) as is the black hose running around The Visitor's chest. The paintwork is a nice metallic blue shade with a fair amount of weathered detail to give the armor a lived in, battle worn look. 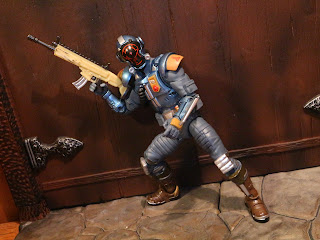 * The articulation on the Fortnite Legendary Series figures is quite nice and the Visitor has some of the best in the line. He has all of the extras such as toe hinges, boot swivels, and hinged shoulder pads as well as of lots of swivel/ hinges, double hinged elbows and knees, and butterfly pecs . Seriously, this allows this guy to take some crazy poses and use two-handed weapons with ease. 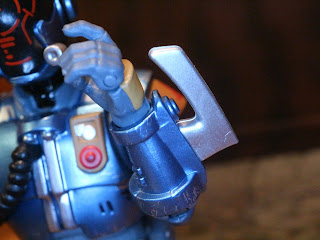 * The Visitor also looks like he has a blade of some sort attached to his right forearm. That is pretty cool! Having been a kid reading comics during the early 90s, I have a fondness for blades attached to the forearms of costumes. 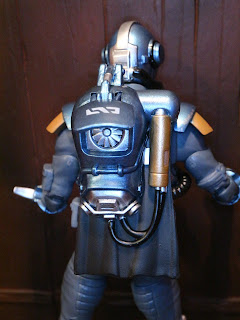 * The Visitor's backpack, or back bling, is the Offworld Rig. It's a very cool looking combination of some sort of life support backpack combined with a black cape. A short cape, by the way, just like so many Star Wars characters wear.  The backpack is incredible and it looks really, really good with the figure. 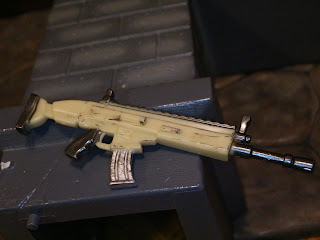 * The Visitor comes with the Siegebreaker, a Legendary version of the Automatic Rifle. It's a really cool looking rifle with some decent sculpting and a lot of weathering. Seriously, Jazwares does a pretty job of painting and weathering their accessories. I wish some of the other companies putting out collector focused lines at retail would take notice, too. 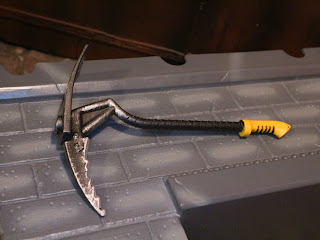 * The Cliffhanger harvesting tool looks like a slightly oversized pickaxe. Man, this thing is slick! I love the sculpt and the crazy amount of paintwork here. Weathering, little details on the handle: This thing has them all! I love it! 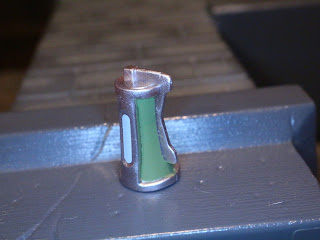 * Like the Skull Trooper and Havoc, the Visitor comes packing a grenade. It has multiple paint apps, can fit in the figure's hand, and just looks kind of cool. 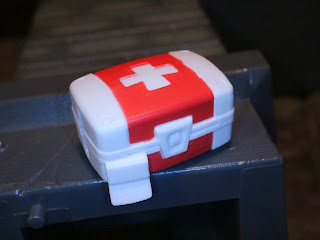 * The Visitor's last accessory is this really cool Med Kit. Not only does it actually look just like the in-game Med Kit but it has some hidden hand grips on the side so the figure can clutch it better. 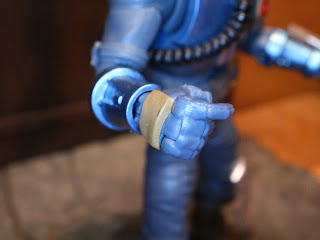 *  My biggest complaint with this line (and only complaint with the figure) is that Jazwares went with hinged fingers. The fingers move with one hinge and while they're not as problematic as the fingers on older Marvel Legends figures, I still don't like them that well. They have a fairly tight grip, but sometimes they're still tough to us, especially for thinner accessories like the melee weapon or a gun grip. Articulated fingers rarely work and here they seem like a fairly useless feature. If they dropped the articulated fingers in series 2 of the line I'd be thrilled. 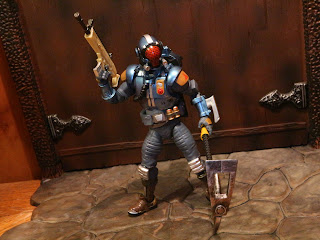 Considering that these are twenty dollar mass market releases, I am amazed by the quality of the figures in this line. The articulation, unqiue sculpts, excellent paintwork, and cool accessories really make these some of the most impressive, if not the most impressive, action figures released this year. I'm not even a Fortnite player but I know a good figure when I see one. The Visitor is my favorite release from the line and another Epic figure.  McFarlane Toys hasn't released a figure of the Visitor yet, but this is actually the second one from Jazware, as they've released a 4 inch scaled Visitor, too. Of course, this one has the interchangeable visors, which makes it the coolest in my book.


This is the first action figure of the Visitor I've reviewed on this site. For more reviews from Fortnite: Legendary Series, check out the following:
Havoc
Rabbit Raider
Skull Trooper (Purple Glow)