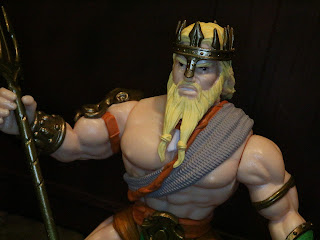 This isn't my first review from Funko's DC Primal Age line but it is the first 2019 figure from the line that I've reviewed.  The 2018 versions of these figures were released through Amazon and suffered from some really serious breakage problems. For the 2019 releases through Target, Funko improved the quality and these figures feel solid and sturdy. First up is Aquaman who just looks awesome. While these are definitely styled after 1980s barbarian fantasy lines, Aquaman's design takes a lot of cues from his 90s era look, particularly the long blonde hair and the hook hand. Let's check out this fearsome warrior from the deep after the break! 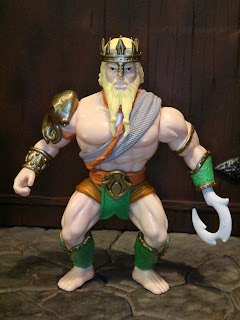 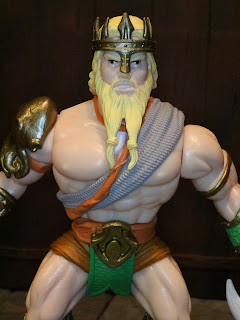 * Funko did an excellent job of capturing Aquaman in a swords and sorcery style. While he's running around bare chested like a good barbarian warrior, he does have a really cool sash and rope coil around his chest with some great detail on them. I like Funko's approach here that while Aquaman "feels" vintage, there are definitely details that feel modern and high quality. He's covered in details such as the cool shark tooth necklace and and the amazing belt buckle. Seriously, that thing is legit. 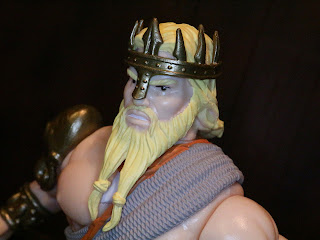 * The headsculpt is cool, too. Very nicely done! It captures a bunch of different Aquaman elements from his fiercer looks (maybe some Jason Momoa incluence on the beard?) and is decked out in a really cool crown. This dude truly shows that Aquaman can no longer be made fun. Seriously, would you mock this guy for talking to fish to his face? Nope. 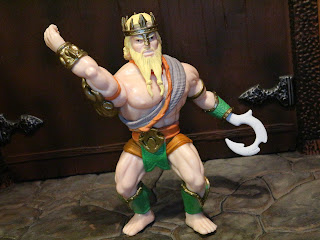 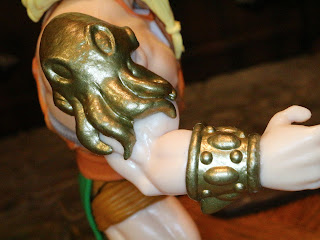 * Aquaman not only has a cool gold cuff on his right wrist but he's also sporting a gold octopus on his right shoulder? Why an octopus? Why not? It looks pretty slamming to me. 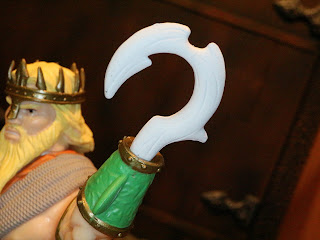 * I love this hook! It looks more like Maui's fishhook from Moana than Aquaman's hooked hand from the 90s, but that's probably a good design choice. This is an incredible design and makes for a fun feature. 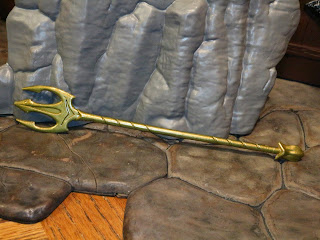 * Aquaman comes with fewer accessories than the other figures in the line, but his trident is pretty impressive. The detail is excellent and it has a great design. 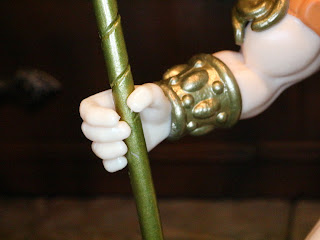 * Aquaman's limbs are made from a harder plastic, which is great, but it makes holding his trident a bit tough. It's tough to get the trident through the gap between his fingers and thumb but the shaft of the trident is too slim to really be cupped by the hand. It ends up just kind of rattling around in there. 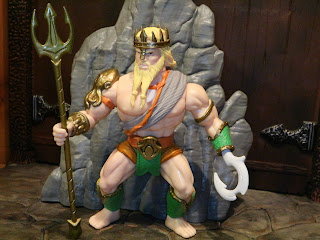 I'm really liking this line and I'm very glad that Funko retooled these to be more durable. Aquaman is a really well designed and fun figure with lots of cool details. The paintwork is neat overall, too. I'm definitely excited to see if we see any more of this line at Toy Fair this weekend as I'd love to see this line have a long, healthy life. With his hook hand and underwater prowess, Aquaman can serve as a great foe to the vintage Trap Jaw and Merman and with Black Manta showing up in series 2, this guy can easily find a place in your collection.

For more DC Primal Age reviews, check out the following:
Ace the Bathound
The Batcave
The Joker Beast
Mister Freeze "Ice Mode"
Posted by Barbecue17 at 2/17/2019