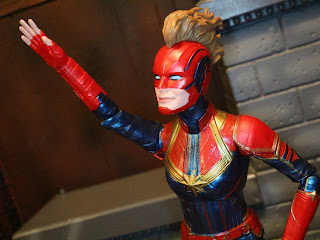 Are you ready for Captain Marvel? I'm pretty excited for it. It looks like another solid Marvel movie with a great cast, the inevitable connection to Endgame (even if it's just a prelude), and the 1990s setting. Of course, since it's a new Marvel film Hasbro has given us a complete series of Marvel Legends figures with a Kree Sentry Build-a-Figure. This figure is the only one in the series to not come with a BAF piece. It's also the only double packed figure in the set. I do wish we'd gotten a few comic based Carol Danvers figures, perhaps even as retailer exclusives, as it's been a while since we've seen her on store shelves. This one is without a doubt based on Brie Larson's portrayal of the character and looks incredibly accurate to the source material. Let's check out Captain Marvel after the break... 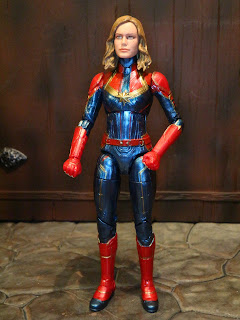 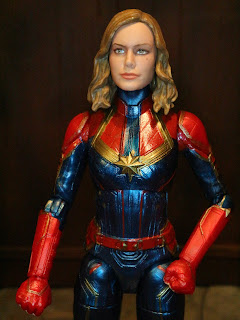 
* Captain Marvel takes full advantage of her unique sculpt by showing off lots of detail all over her costume. Her outfit is quite unique and really looks like much more of a classic superhero outfit than many other characters in the MCU. It works, though, and just looks amazing. I love the red, blue, and gold. It's bright, bold, and manages to have a very traditional aspect to it while feeling quite modern and exciting. 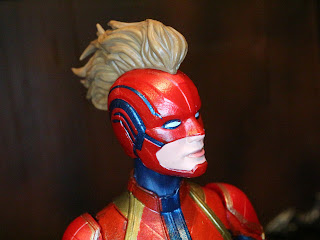 * Captain Marvel comes with two portraits, first up is her "helmeted" portrait with her hair popping out of the top like a mohawk. It's a cool look and manages to look very faithful to Carol's comic origins. The paintwork is quite sharp here all around. 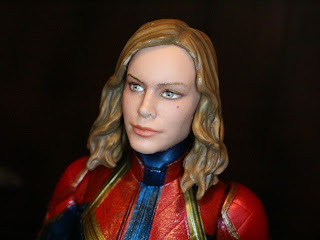 * Second up is the unmasked portrait. Is it a perfect Brie Larson likeness? Maybe not? I'm not sure. It's quite good, though, and at some angles it really looks like Ms. Larson as Carol Danvers, regardless, it is a darn fine portrait. The eyes look quite lifelike and the faceprinting is fantastic all around. The heads swap easily, too, so you can display Captain Marvel however you'd like over and over again. 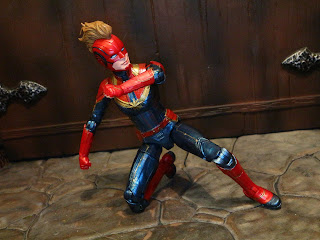 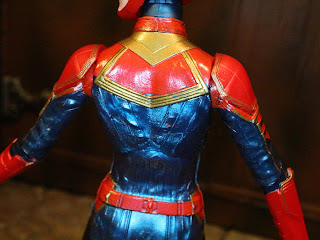 * I love how the paintwork is done with a bit of a metallic sheen to it. It really does a nice job of replicating the suit from the film. Beautiful work, here. 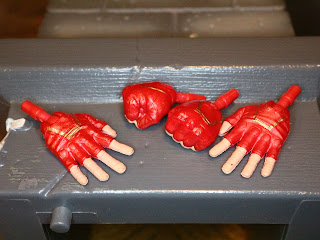 * Captain Marvel comes with two pairs of hands: Fists and open palms. The fist are great because what good is a Captain Marvel figure if she can't punch the bad guys? The open palms are even cooler, though, as they're great for flying poses. 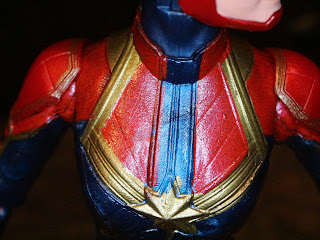 * It's tough to tell due to the shiny colors of the suit but there are some paint flaws here. Most noticeable, Captain Marvel's star logo is not fully painted here. Since she's double packed in a case you might be able to take a minute to get the best one you can. 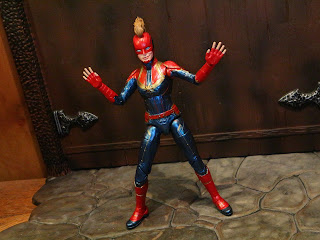 While another accessory or energy effect would have been welcome, Captain Marvel turned out great. It's been a few years since Carol has been on action figure shelves in Marvel Legends so it's nice to see her coming in at full force. This is a Great figure and a solid version of Captain Marvel if you're looking for one. Pretty soon a few other companies should have Captain Marvel figures out (Mezco, Diamond Select) but Hasbro is getting their first and I imagine it'll be hard to get the same bang for the buck as Hasbro offers.

If you're a fan of Carol Danvers/ Ms. Marvel/ Captan Marvel/ Warbird, I've reviewed a few other figures of her, including the Marvel Legends Infinite Series Captain Marvel (Maidens of Might) and the Ms. Marvel, Captain America, & Radioactive Man 3-Pack and the Toy Biz Marvel Legends Warbird.
Posted by Barbecue17 at 2/23/2019