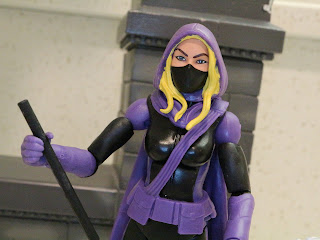 Can you believe that the Spoiler, aka Stephanie Brown,  has been around since 1992 and yet this is the first action figure of her? Yes, DC Direct did release an extremely rare version of Stephanie Brown as Batgirl, but she has been the Spoiler much more often and for much longer. Finally! Stephanie is a main part of the DC Rebirth Detective Comics team which seems like a team Mattel is eager to complete in the DC Comic Multiverse line. Along with the Rebirth version of Harley Quinn, Spoiler is a Walmart exclusive figure that is meant to tie in with the upcoming Multiverse series including a Collect & Connect Lex Luthor. There's been no sign of that series for the past month or more but Stephanie and Harley have been hitting Walmart shelves in pretty good numbers, hopefully meaning these will be fairly easy for fans to pickup. Let's check out the Spoiler after the break... 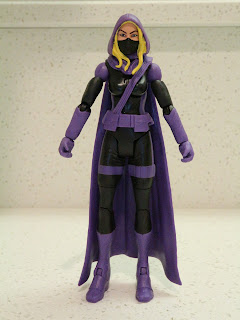 Accessories: Sanjiegun and an alternate head for the Collect & Connect Lex Luthor figure. 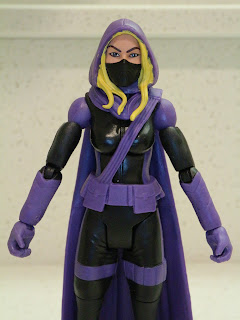 
* While this is a pretty modern looking version of Spoiler, it still should be recognizable to most DC Comics fans. I love the simple black and purple costume; it's just a great looking color scheme that looks somewhat menacing and functional while capturing the feeling of Stephanie's "homemade hero" design. She's very sleek and streamlined and should easily fit in with your DC Universe Classics collection as she's a character whose absence is sorely missing in that line. 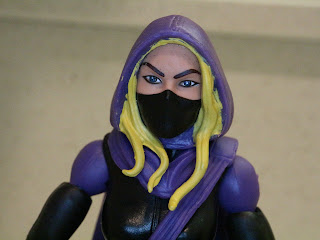 * The headsculpt is quite good. While I would have loved an unmasked headsculpt, too, what we have is very nice. Stephanie's eyes are peeking out of her hood while her lower face is covered. The paintwork is quite good on the eyes. 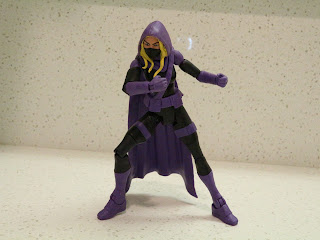 * While she's not perfect, Spoiler does have lots of new articulation points such as swivel/hinge ankles and swivel/ hinge wrists. It's happening in small steps but Mattel does seem to be improving this line little by little. She feels quite durable and looks good on display in a few different poses. 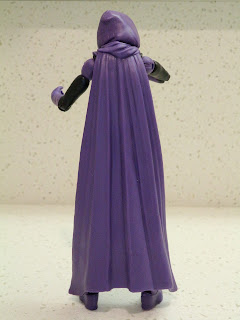 * Spoiler's cape is a separate piece that is attached around her neck. It is molded in a flexible purple plastic and looks great. It's also nicely balanced and thus doesn't pull the figure over like some plastic capes sometimes do. 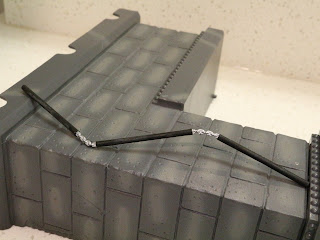 * Spoiler comes with a sanjiegun, a three sectioned staff-like weapon. It's a cool accessory for her and, so far as I can tell, it's a unique mold. The chains connecting the sections are also painted silver, so it's not just a flat, lifeless, single colored accessory. 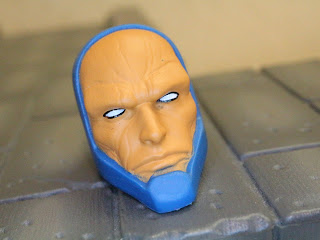 * The upcoming series of DC Comics Multiverse figures include the pieces to build a Super Lex Luthor figure from DC Rebirth and both Spoiler and Harley Quinn come with pieces to complement that figure. Spoiler comes with what looks like a Darkseid head that can presumably be used as an alternate head for the figure. I haven't ready whatever story this design comes from yet, so who knows. It's always good to get extra pieces, though. 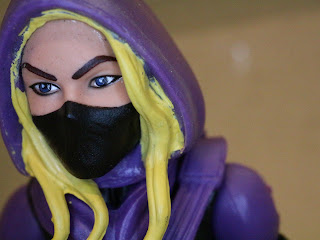 
* There is a lot of slop on the edges of Stephanie's hood and hair. Lots. 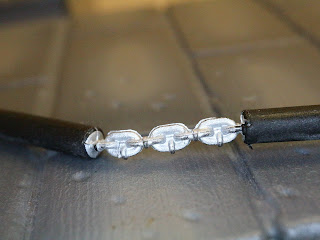 * Be super careful with the chains on Stephanie's accessory! They are very fragile and feel like they could break quite easily. They are not meant to be bent at all! 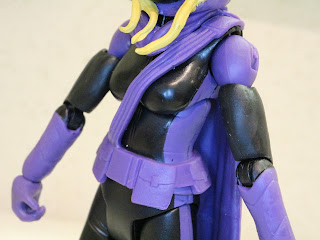 * If you look closely at Spoiler, you'll notice lots of mess paint apps on the edges where purple and black meet and lots of odd looking "scuffs" on the plastic. I don't know what the deal is, but Spoiler definitely has some flaws that are hard to pinpoint but that bring the overall appearance of the figure down. 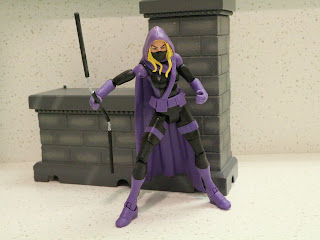 I've been waiting for a Stephanie Brown as the Spoiler figure for years and while we now have one, I do have to admit that I'm a but disappointed by her. She's still a decent figure that is well articulated and fun but lots of little careless QC errors bring her score down a bit. I can definitely tell that Mattel is really trying to do more with the DC Comics Multiverse line, and there are some commendable efforts here, but the overall presentation still needs to be improved a bit more. Still, it's great to have her and it means we are one figure closer to completing the Detective Comics team...

This is actually the first figure of Spoiler/ Stephanie Brown I've reviewed on the site. For more DC Comics Multiverse reviews, check out the following: