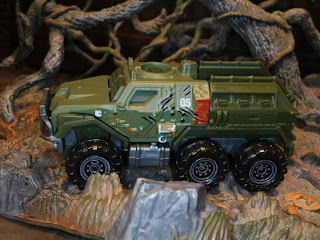 Today I'm checking out another vehicle in the Wal-Mart exclusive Battle Damage Jurassic World Matchbox line. This time it is the Armored Action Truck, which I've reviewed on two different occasions in two different paint schemes. The original single packed Armored Action Truck was my first review from this series, so it's kind of interesting to see this one out there again with such a different look to it. This is the first vehicle from the Battle Damage series I noticed since unlike the other vehicles in the series, this one is really different in color. Let's check this one out after the break... 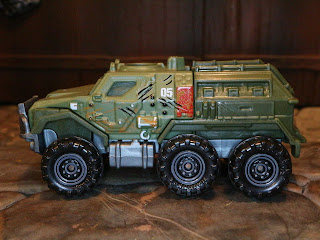 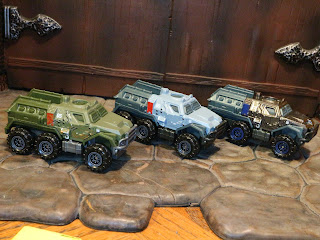 * Here is a shot of the Battle Damage Armored Action Truck (left) with the single packed Armored Action Truck (center) and the Island Transport Team version (right). While the mold is the same on the newer version as it is on the previous releases, there are some differences such as the green paint scheme, a gray grill, and the presence of the Battle Damage paint apps. This one is numbered #5 like the single packed version (the Island Transport Team version is #12). 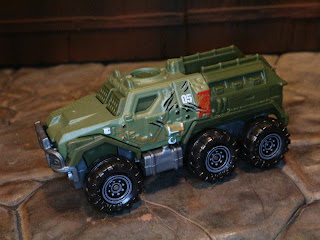 * The Armored Action Truck looks great in green, doesn't it? I think the green paint scheme is the best looking of the three. The dino Battle Damage paint looks great here and, in some places, is actually synced up with the sculpted scratches on the vehicle's body. 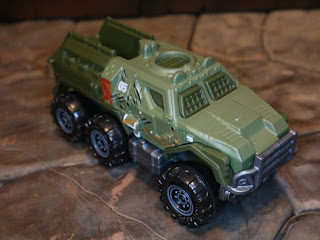 * The lighter green plastic also brings out the scratches on the hood a bit better than the previous releases did. This is a seriously nice looking Matchbox vehicle. 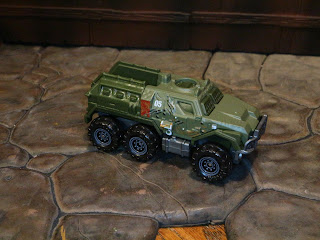 While I don't have as much to say about this mold the third time around, I do think this one is my favorite. It still boggles my mind that Mattel has gone as deep into this line as they have, but I like it. While many of my local stores have slowed down in restocking the Jurassic World toys (the figures seem to be nearly impossible to find), the Matchbox cars keep getting restocked. People must be liking these, and I'm right there with them. This one gets a bump up to a Great and a 1/2 for me since it is so darn slick!

I've reviewed plenty of other Matchbox Jurassic World vehicles, including: