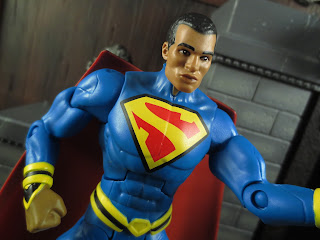 "It's a bird! It's a plane! It's...President Superman!" As part of the first full series in the DC Comics Multiverse line from Mattel we've received a Batman and Joker, two prominent heroes and a major villain from DC television shows, and one character that's definitely a bit more obscure: Earth 23 Superman! Yes, Calvin Ellis (Kryptonian name Kalel) is Superman on Earth 23. He's also the President of the United States. Originally appearing in issue #7 of Final Crisis, everyone just assumed that he was President Barack Obama (an according to writer Grant Morrison, he was) but he's made one new 52 appearance in Action Comics as well where more of his information, including his name, was revealed. While he's not a very prominent character, he's definitely an interesting choice for a figure and I'm glad that Mattel at least added one new character to the DC Universe with this series of figures. I found him in a brand new case of wave 2 figures a week or two ago which prompted me to pick everyone up so that I could build the Justice Buster. Ready for a closer look at this new DCUC styled figure? Then join me after the break... 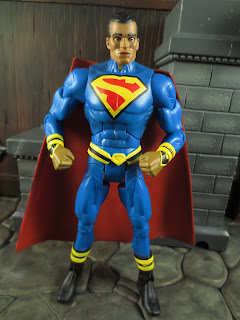 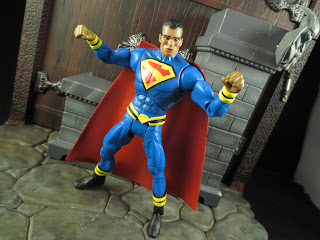 * While he has some different parts, Superman is definitely the figure that most resembles a DC Universe Classics figure in this series. Well, other than the Joker who straight up reuses the DCUC suited body. This guy has all of the articulation you would expect except for the waist swivel, which seems to not function here due to the belt. Otherwise, you know what you're getting here and it all works fine. 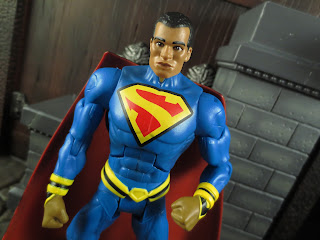 * I really like the look of this figure. First, Mattel actually used a more detailed body (possibly one from the DC Unlimited line) that features more detail on the costume. There's also some really vibrant paint work here and a nice, clean tampographic "S" logo on the chest. And the headsculpt? In person it looks excellent and captures the character's likeness well. 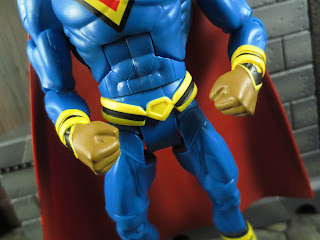 * President Calvin Ellis is involved in politics, so you just know he's got to be a fighter! He's also wearing some cool wrist guards and is rocking a rather unique belt. It's actually an extra piece attached to a more standard crotch piece and it does a lot to add more individuality to the figure. 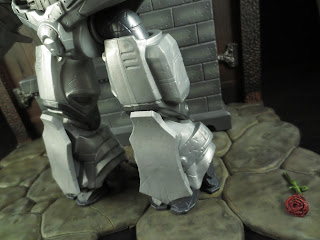 * With the swap back to 6 inch figures, Mattel has also jumped back in to offering Collect & Connect figures. This series of 6 figures comes with the pieces to assemble Batman's Justice Buster. This seems like a pretty decent BAF. Kalel comes with the left leg, which features a hinged knee, a swivel thigh, and swivel/hinge hip. I've now picked up all of the pieces to this and should be reviewing it sometime next week. 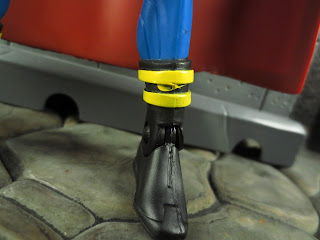 *Oops! There's a paint hiccup on mine! Black and yellow can be tough colors to get right (heck, yellow nearly always has problems) and when their is a screw up it's far more noticeably. This one is very, very noticeable. 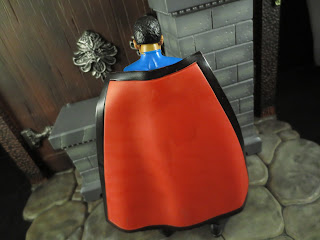 * Superman's cape is not handled poorly; I just don't like it. I'm not sure what the thought was behind the idea of a cape that doesn't attach to his shoulders in some way but it just looks really odd.

I was pretty surprised by how much I like this figure. It's definitely much nicer than any of the TV based figures in this series and hopefully is a good sign that we'll see more obscure characters in this line in the figure. Earth 23 Superman is a Good and a 1/2 figure and one that fans of DCUC should definitely pay attention to. He adds another completely new character to that collection, something that's almost always welcome. Oh, and that symbol on his chest? On his planet, it stands for hope. And maybe change, too!


The only other Superman figure I've reviewed on here is Split Cycle Superman from Mattel's Man of Steel line.