The Revenge of 31 Days of Toy Terror: Scareglow from Masters of the Universe Classics by Mattel 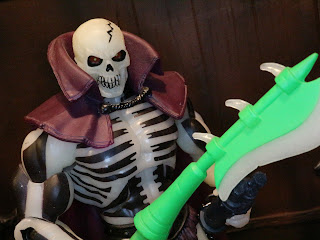 When you look at Scareglow, do you become overly terrified? Maybe your palms get sweaty, your heart beats a bit faster, and you begin to experience uncontrollable feelings of dread. If that's the case, you just might have ostiophobia, an irrational fear of bones. Of course, you may also look at Scareglow and feel an overwhelming sense of awe: Perhaps your heart starts beating faster, you hear some heavy metal music playing as if out of nowhere, and you get a sudden urge to paint Scareglow's visage on the side of a paneled van. That happens simply because Scareglow is straight up rad. Scareglow was the November 2009 release in Mattel's Masters of the Universe Classics and he's making an appearance in this year's The Revenge of 31 Days of Toy Terror both because he's a wicked cool skeleton with a neon green Scythe of Doom and because Masters of the Universe Classics appeared in five separate installments during the first three years of 31 Days of Toy Terror. Today Scareglow, the evil ghost of Skeletor, will have his revenge! 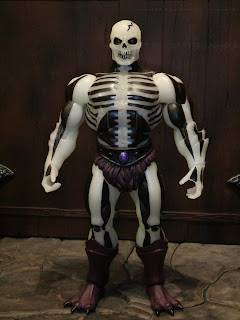 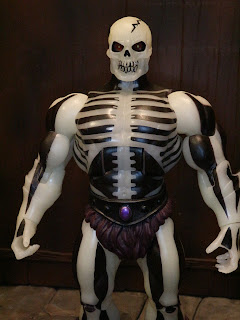 * Perhaps better than any other figure in the line, Scareglow shows off how the Masters of the Universe aesthetic can be manipulated to create so many cool characters. In the vintage line Scareglow (along with King Randor and Clamp Champ) was a fairly simple figure released as a cost cutter later in the line. While he had a new head sculpt and a cloth cape, the rest of the figure was a glow in the dark repaint of one of the standard bodies from early in the line. That's largely what Scareglow is, too: A new headsculpt on a standard body. He looks incredible, though. While he doesn't look accurately like a skeleton there is still something very cool about him. He looks very supernatural but also like one of the David S. Pumpkins skeleton guys. 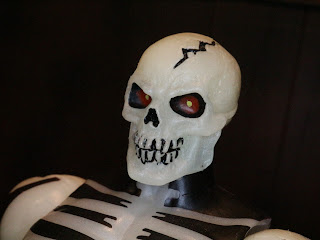 * The headsculpt is incredibly cool. There's definitely a Skeletor like vibe her,e but that tends to happens with skulls. While the original packaging's blurb "Evil Ghost of Skeletor" caused some folks to think Scareglow was Skeletor's ghost from the future, it turns out he's just an evil spirit that Skeletor has dominion over in some way. I love the paint on the teeth, the crack in the skull, and the red and yellow in the eye sockets. 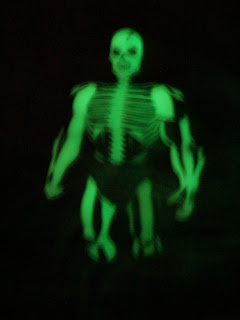 * One of the coolest parts of Scareglow is that he glows in the dark. Like his vintage Scareglow, the spooky specter emits a ghoulish, greenish glow that will fill you with dread. It's a great, strong glow and the black paint applications really help to definite the skeletal look when Scareglow is doing his thing. Nice! 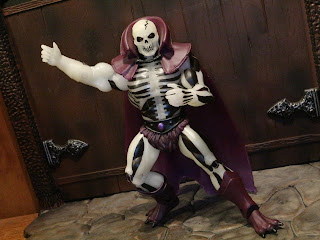 * Masters of the Universe Classics had one of my favorite articulation schemes for years and Scareglow still holds up well. He's durable, well articulated, and super fun to play with. I love this line! 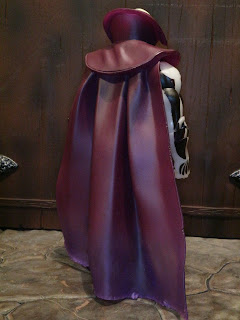 * Scareglow's cape is made from molded plastic. It has a very cool, old school feel to it and reminds me of something that a highwayman might wear. It also has some wear and tear along the bottom where the purple fades into a translucent appearance. Mattel did a great job on this cape. 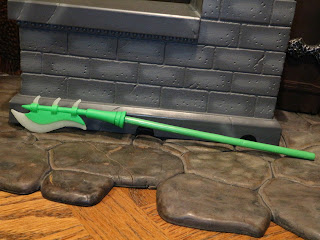 * Scareglow includes his Scythe of Doom. I'm not really sure it's a scythe, though; it's more of a halberd. Mattel would later use this halberd with the Weapons Rack accessory set, which is fitting as the vintage Scareglow's halberd was reused from the Weapons Rack too. Scareglow's weapon is molded in green plastic with a glow in the dark blade and spikes. 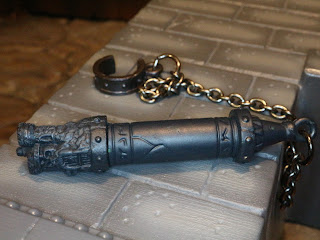 * Scareglow includes one of my favorite accessories in the line: The Grayskull Reliquary. This tube features an image of Castle Grayskull on top of it, some weathering to show off its age, and a metal chain attached to a cuff. Interestingly, the reliquary is apparently cursed and Scareglow is always doomed to carry it yet can never open it. 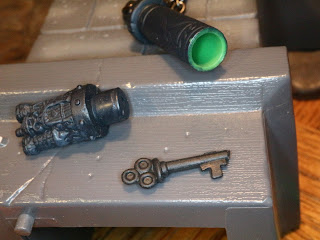 * Oh, that's right! It opens! Inside is a key which is used to open a secret door in the side of Castle Grayskull. Mattel wouldn't release Castle Grayskull for four years after the release of Scareglow in 2009 but this was still a cool inclusion and it turned out even better when it ended up actually interacting with the castle once it was released. 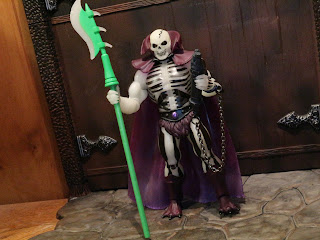 Not only is Scareglow one of the coolest Masters of the Universe figures released, he's probably one of my favorite action figures from the past decade or so. Glow in the dark paint, a cursed accessory, a purple cape; this guy has it all! While Scareglow appeared fairly early in the Masters of the Universe Classics toyline he turned out to be one of the strongest figures released in the entire series. He's an Epic figure and still an example of how great this toyline was at one point!