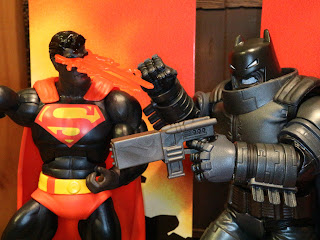 During the weekend of SDCC 2017 I noticed an email from Mattel in my inbox advertising their latest endeavor, the Mattel Vault. Essentially, Mattel has just added their adult collector targeted items to Mattel Shop, but it's a nice way to sell some items that are still available. Plus, guess what? The abysmal Digital River is no longer around! In fact, I checked it out and ordered this very cool new The Dark Knight Returns set that is exclusive to the Mattel Vault and guess what? It was shipped through a normal shipping method, not the Newgistics craziness that plagued MattyCollector and doomed all orders to sitting in Sparks, Nevada for a few days. Hopefully Mattel keeps some cool stuff on this site. Now that we've addressed that craziness, you're probably wondering "What's the deal with the Drow versions of Batman and Superman?" I'm glad you asked! This set of figures is part of the The Dark Knight Returns subset of figures in the DC Comics Multiverse line and features the two members of the DC trinity battling as they appeared on the cover of The Dark Knight Returns #3: The Dark Knight Falls. It's a cool idea, but how does it work in execution? Find out after the break... 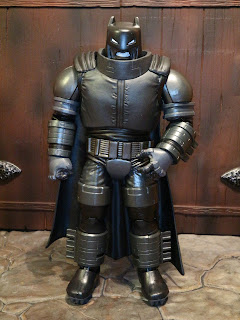 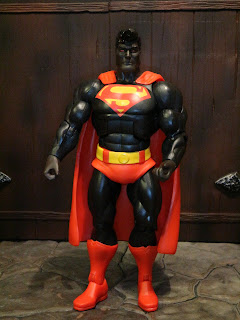 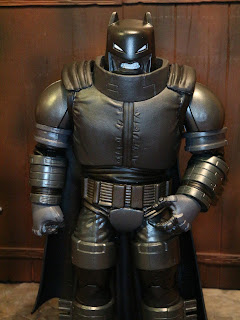 
* This version of Batman is absolutely a simple repaint of the Doomsday series Armored Batman figure. Everything is exactly the same except the color scheme: Same paint, same  limited articulation, same accessory. I absolutely love this color, though, as it looks really cool. Even if you don't like the idea of "comic shaded" figures, this still looks like a really cool Batman suit. The mixture of black and grey is absolutely awesome looking. 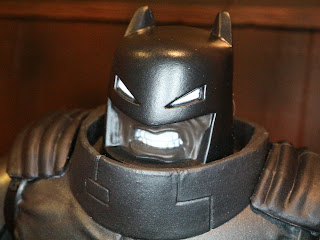 * Batman has the same brownish-grayish flesh tone as Superman, meant to replicate the look of a silhouette. It works pretty well. While the actual cover makes everything on Batman black except his eyes (there's no detail; it's literally just a silhouette), Mattel took some creative liberties and gave Batman some varied coloring and white teeth to go with his eyes. It's simple but pretty effective. 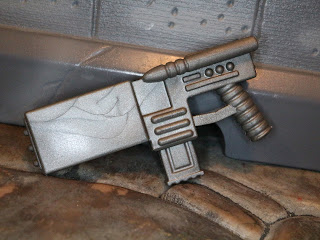 * Batman comes with the sonic gun he uses in DKR to fight Superman and, comparing it to some panels from the comic, it's pretty accurate. It's a solid accessory and makes perfect sense for the character. It's exactly the same as the accessory that came with the Armored Batman Multiverse figure. 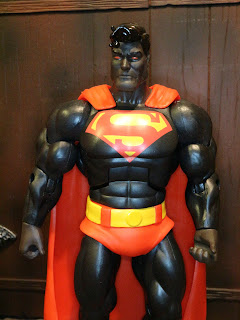 * Superman is another simple repaint, this time of the Wal-Mart exclusive Dark Knight Returns Superman from Spring 2016. I don't actually own that figure yet (it's the only Mattel DKR figure I don't have) so I will spend a bit more time looking at this guy than I spent on Bats. While the artwork only shows Superman's belt, cape, and "S" logo in color, Mattel also chose to color in his trunks and boots. Oh, and he has red eyes. It's a very cool look. It's not often you see a unique looking Superman, so this one stands out quite a bit. 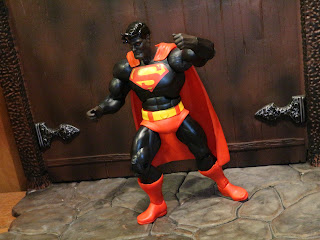 * Superman, like most of the DKR subset, is based on the Masters of the Universe Classics standard body with some character specific modifications. The articulation isn't perfect, but I think it's adequate. These figures feel very sturdy and they're quite fun to play with. I do love that Mattel uses the larger bodies on this line to better capture Frank Miller's character proportions. 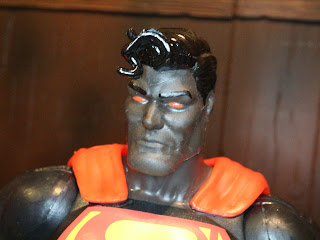 * Supes looks pretty creepy here. It was tough getting a good shot of him due to how dark his hair, skin, and eyes are, but the overall effect in person is awesome. Again, it's interesting to see a somewhat unique take on Superman. The headsculpt is perfect (I love the expression) and the over-exaggerated spit curl forces an excellent visual dichotomy between Superman the boy scout and Superman the walking atomic weapon. 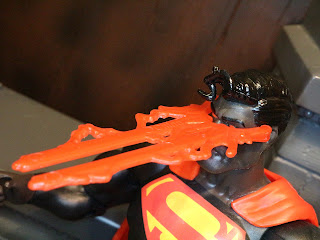 * Superman comes with a really cool accessory: A heat vision optical blast that can fit over his head. I think this was included with the Toys 'R Us exclusive BvS Superman, but it fits perfectly here. It's not part of the art the figure is inspired by, but it works great as a toy. 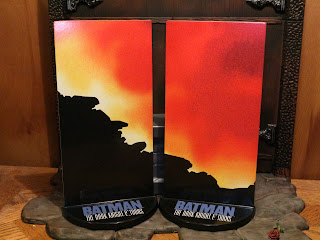 * Both Batman and Superman come with a display stand and a backdrop card that slides into a groove on the back of each stand. The stands are semi-circles with the "Batman: The Dark Knight Returns" written on them and they're reused from the Batman: Classic TV Series line. Not only do I always love the inclusion of stands, but I really like the colorful, ominous backdrops. They actually improve the figures rather than detract from them. 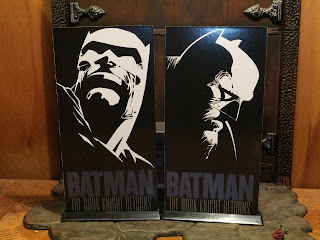 * Flip the cards around and you get some cool Batman portraits, too. 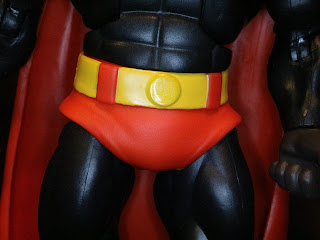 * Batman has some of the same negatives I mentioned in my review of the original figure (weak articulation, odd grip on the sonic gun), so check out that review for those negatives. Superman's a new figure to me, however, and while I like the way Mattel attempted to duplicate his trunks, I think the execution is a bit lacking. The trunks just look a bit odd and misshapen to my eyes. Anyone else agree? 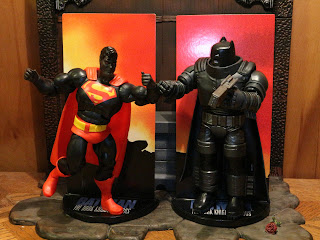 * Considering that Mattel based this set off of a very specific piece of art, I'm definitely going to evaluate how close they came to capturing the art in action figure form. I can definitely overlook the presence of more color as I think it adds more value to the figures, but there are a few things I wish Mattel would have tried. First, Batman really should have included the larger gun and trench knife he's sporting in the art. A new right hand to hold stuff in would have also been preferable. Second, a soft goods cape to allow Superman's cape to fly over his shoulder dynamically would have been pretty wicked. 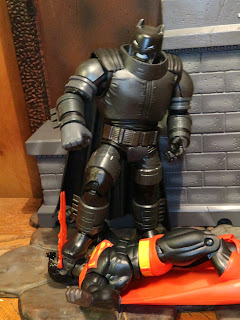 This set definitely surprised me. While it's a simple repaint with no new parts, it's pretty novel. There is definitely someone who loves The Dark Knight Returns at Mattel and I hope we keep getting figures peppered into the line from it. This is absolutely an unnecessary addition to a collection, but that doesn't mean it's not fun. This is a Good and a 1/2 set. While these are stylized based on a cover from The Dark Knight Returns, they're still cool toys. While a child might be confused as to the coloring in places, these would still make very durable, very fun toys. I've been enjoying messing around with them. Plus, they're an exclusive without a mark-up. $40 is what you'd pay at retail for two Multiverse figures (plus Mattel has been giving lots of free shipping or $10 off coupons). This set isn't for everyone but, if you're a Batman or Superman or just a DKR fan in general, this might be worth picking up.


If you're looking for more Batman reviews, you're in luck: I've reviewed so many Batman toys that I've given the Caped Crusader his own review archive!

If you're looking for more of Superman, I've reviewed the BvS Multiverse Superman, the Multiverse Earth 23 Superman, Split Cycle Superman from Mattel's Man of Steel line, and Superman DC3 from the Nano Metalfigs line.