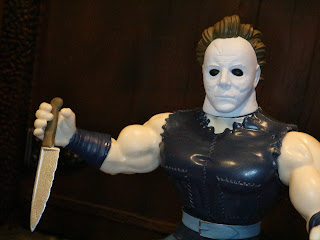 Guess what? Tomorrow night one of the biggest events of the Halloween 2018 season will happen: The new Halloween film, simply titled Halloween, will hit theaters across the U.S. It really and truly has been 40 years since the first film was released and this one is, oddly enough, just a sequel to original 1979 classic. Yup. Every other sequel is being ignored. I'm optimistic, although doing away with Halloween 2 definitely is going to be very hard for me to accept. Anyways, let's talk about this action figure as it is kind of cool. Savage World is a new Funko property that takes various characters and renders them in the style of a Masters of the Universe styled action figure from the 1980s. It's a cool concept and while I'm tempted by some of the other characters (and by the upcoming DC based Primal Age), Michael Myers is my favorite. He's also a character who is sometimes difficult to license. I'm not an expert but my limited knowledge is that the rights to the character are tied up with different studios for different films. Hence, that's probably the reason why this version of Michael Myers is being billed as hailing from 2002's Halloween: Resurrection, AKA the film where Busta Rhymes kicks Michael Myers out of a window while yelling "Trick or treat, motherf&*$%#!" Yup. It's definitely not one of the series highlights but it must be cheaper to license, as why else would Funko pick this specific film for this figure? That's not a big deal, though, as for a stylized figure like this most Michael Myers' costumes look alike. Let's jump in and check out this figure after the break... 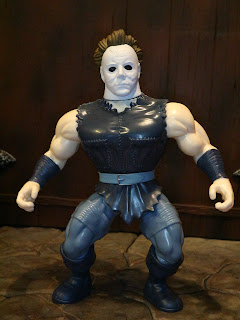 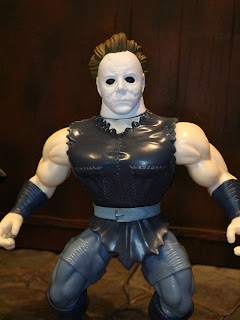 * I really do like the Savage World portrayal of Michael Myers. They kept the two most iconic elements of the character: The mask and the blue jumpsuit. For the jumpsuit, Funko played around a bit to give it a barbarian-fantasy vibe. Rather than a full jumpsuit, Michael is decked out in a blue tunic with stitched pockets and frayed edges. Imagine Michael Myers in more the style of Prince Adam, a strange comparison I know, and you can see what Funko was going for with this design. The style really does make the figure feel like it could have theoretically been a 1980's release as it looks like a Masters of the Universe figure, or one of the many 5.5 inch imitators. 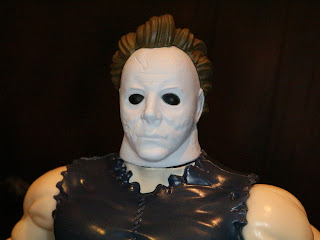 * Considering how iconic Michael Myers' mask is, it's pretty difficult to convey it in action figure form sometimes. I really like what Funko did here. It's pure Michael Myers, with full black eyes, but the hair is a bit more wild. The hair is actually pretty impressive here with lots of detail and a solid style. If the head were separated from this body, it would still be a good, pure Michael Myers sculpt. 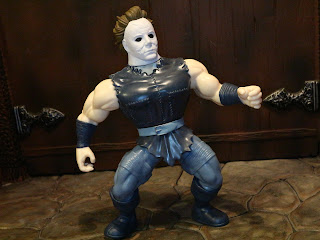 * Again, like ReAction figures, the Savage World figures are designed to mimic the style of a simpler time in action figure design. Michael has six points of articulation, all swivel joints except for the hips which are balljointed. The balljoints are quite sturdy and Michael can stand well without tumbling over. He feels pretty nice and solid. I was worried about the quality of these but I'm quite pleased with how the figure feels overall. 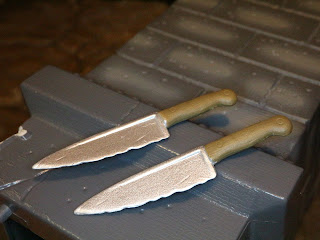 * While Michael Myers' Savage World cohorts have weapons that look very fantasy-esque, Michael's knives don't look terribly different from the standard kitchen knife he carries. The blades are a bit more rugged looking, however, and he does come with two of them. They're nicely painted as well. 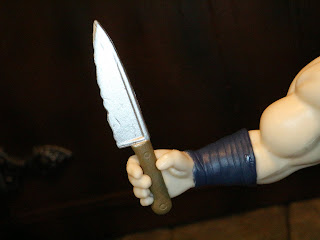 
* My only complaint with this figure is that Michael has a tough time holding his knives. The handles are much slimmer than his grips. Funko did sculpt his fingers to "grip" the knife at the tips of his fingers but the knives slip out fairly easily. 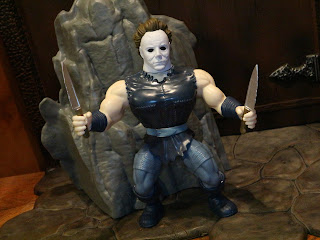 I know not everyone is interested in the retro styled action figures, but I imagine that with the A-list horror stars Funko has in the Savage World series these should do pretty well. Besides retro toy enthusiasts, particularly fans of this 5.5 inch scale and style, I imagine that horror collectors will eat these up as well. There isn't always something "new" to do with these characters and Funko is definitely offering a fresh take. Michael Myers is a Good and a 1/2 entry in this series and, seeing the higher quality than I was expecting, I'll be paying more attention to other future releases.