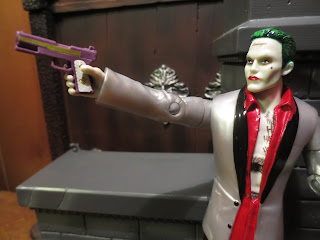 While I looked at the 12 inch Harley Quinn from Mattel yesterday, today my coverage of Mattel's Suicide Squad tie-in line begins earnest with a look at the Toys R Us exclusive figure of the Joker. Played by Jared Leto, who already has added quite a bit to the mythic status of the character, the Joker seems to truly be a wild card in this film. While there are plenty of people already criticizing Leto's performance (who haven't even seen the film yet) I think we can all agree that Leto seems to be unique take on the character and, despite how it may turn out, I think there's no possible way this will be boring. Boring villains are the worst and fortunately I can't think of any Batman film with a boring villain. Over the top and ridiculous, possibly. But boring? Nope. I'm really preparing myself to be astounded by Leto's performance; the Joker is one of those characters who is not only larger than life but who also has so many facets to him that there is plenty of room for unique interpretations. Enough about the film, though: Let's talk about the figure! While the Joker is scheduled to be released in the second wave of the series, this Joker is out now as an exclusive to Toys R Us. While Mattel didn't do a specific Suicide Squad line targeted at kids (probably rightly so) they have released a number of figures that are part of the DC Comics Multiverse line. Ready for a closer look at this new version of the Clown Prince of Crime? Then join me after the break... 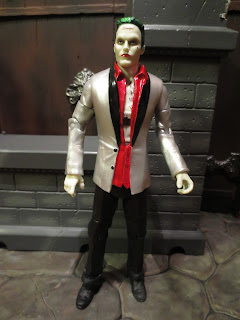 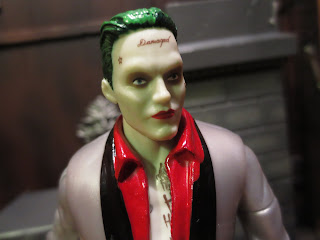 * Looking just at the shape of the face and the eyes, I think this is a pretty decent likeness of Leto. There's actually some pretty nice paint work here, too, including some dark circles around the eyes, the blood red lips, and a darker wash on the hair. The tattoos look good also: Joker has the word "Damaged" written on his forehead along with a stylized J on his cheek (like a teardrop) and a star on his right temple. 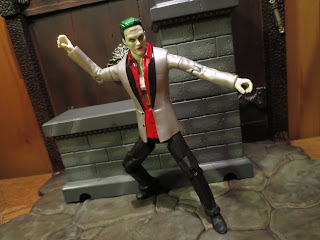 * While the non-removable jacket blocks the mid-torso hinge, the rest of the figure is as well as articulated as the average DC figure Mattel has released. The Joker certainly feels rather sturdy and should hold up well to play or posing. 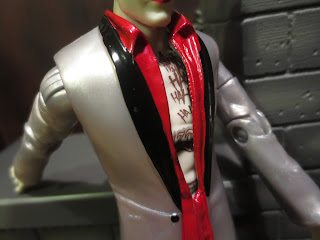 * It would have been nearly impossible to photograph without damaging the jacket but, if you look closely, you can see that the Joker has a full set of tattoos underneath his silver jacket. It's cool that they're here even though they're hidden and they seem to be very nicely done. I'm excited to see a shirtless Joker released to see how accurate these really are. Mattel does a great job with the tattoos on their WWE figures, so hopefully they recruited some of that team for help. 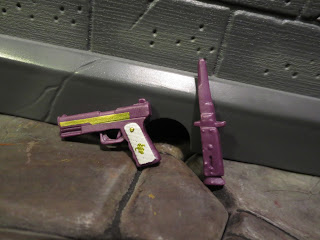 * I like the Joker's accessories.  A pistol and switchblade work great for the Joker and both are molded in purple plastic. There are some nice paint applications on the pistol that help to sell this as a custom weapon used by Batman's greatest foe. A silver paint app on the blade of the switchblade might have been nice but I could see the Joker using something like this, so I'm not too bothered by it. 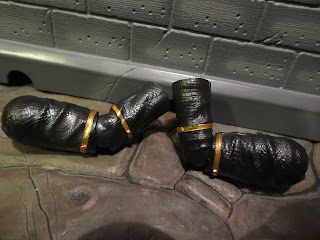 * I always consider build-a-figure pieces (or "Collect & Connect," as Mattel calls them) to be a positive and what's kind of cool is that this exclusive Joker gets some exclusive, alternate pieces for Killer Croc. While the standard Croc figure comes without a shirt, the Toys R Us and Amazon exclusive Harley Quinn figures add wrapped hands and a jacketed torso. The Joker gives the jacketed arms. Killer Croc doesn't appear to be too much larger than the other figures in the line which seems accurate to the film. 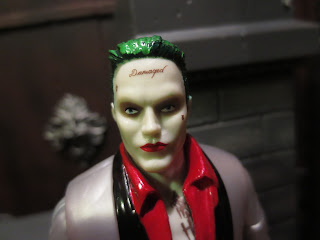 * Considering all of the pictures we've seen of the character, I'm not sure that I'm wild about this particular facial expression for this version. It's not bad (lots of collectors seem to be interested in using it as a Dark Knight Returns version of the Joker) but it just doesn't seem to represent Leto's Joker thus far. Maybe something will change in the film and we'll see this more demure Joker, but for right now I'm a bit disappointed. I want full-Joker! 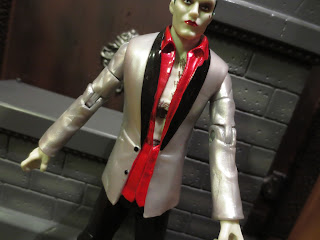 
* The elbow joints on this figure look massive, particularly given the silver suit. I think these are the standard DCUC suited arms we've seen many times but they just look bulk and oversized here.

*Also, the jacket? It's just not very good. Maybe Mattel should have went with a newly sculpted torso here as the jacket overlay just doesn't look good painted. It tends to messy and a bit cheap. 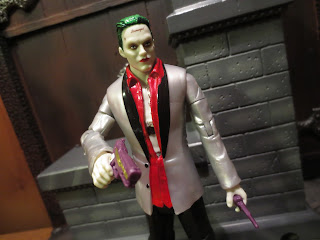 I'm not overly impressed by this figure. In fact, I'd probably say that I'm a bit disappointed. Joker's not a bad figure but he's not as good as I would have expected a new movie-based Joker to be. I know Mattel hasn't been putting out the best figures in their DC Comics Multiverse line (it's no DCUC or Batman Unlimited) but I hoped for a bit better. This figure, really, is just rather average. Unless you're planning on building the Killer Croc figure or you pick up every Batman figure in the 6-7 inch scale (that's me, BTW) you could probably skip this one. He's Good, but there are many better Joker figures out there.


I've also reviewed plenty of other DC Comics Multiverse figures by Mattel including: