The Revenge of 31 Days of Toy Terror: Lord Lootem from Treasure X by Moose Toys 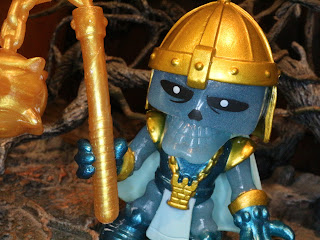 While I reviewed my previous Treasure X toys back when I first got them I definitely wanted to save at least one for this year's Halloween countdown. Yeah, the theme this year centers around reviewing toys of characters I've already reviewed previously or toys from lines and properties I've checked out in the past but these are so cool (and such a popular commodity right now) that I wanted to make sure to include at least one in 31 Days of Toy Terror. Today I'm checking out Lord Lootem, one of the "Ultra Rare Glow in the Dark" figures from The Mid-Knight Crusaders. Decked out in some crusader garb as if he is either getting ready to take back the Holy Land or tell Indiana Jones he chose wisely, Lord Lootem is a glow in the dark skeleton clad in gold armor that I dug out of a chunk of sand. Throw in a Kit-Kat bar and a piece of pumpkin pie and that right there is fairly close to the true meaning of Halloween, am I right? It's not candy, man; it's glow in the dark skeletons! Let's check out Lord Lootem after the break... 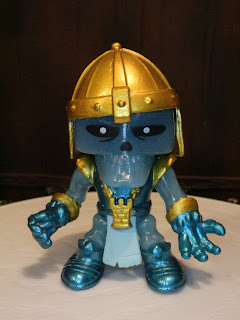 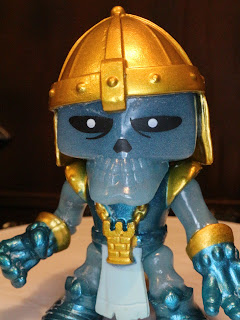 
* I love the color on this guy. The blue for his bones looks awesome and contrasts nicely with the brightness of the gold. All three of the Mid-Knight Crusaders are decked out in armor but Lord Lootem looks like he is wearing a Norman styled helmet. Like the rest of the figures in the series, he also is wearing a large gold necklace around his neck. Lord Lootem's is a gold chain that looks like a rook from Chess. 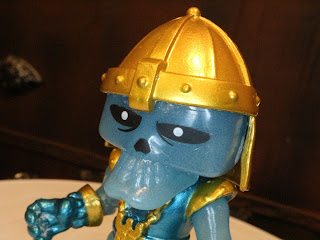 * Like with the previous figures, I really like the look of the painted on eyes. They don't stand out as much against Lord Lootem's blue bones as they do against the white bones of most other figures but they still pop out and give the figure some personality. 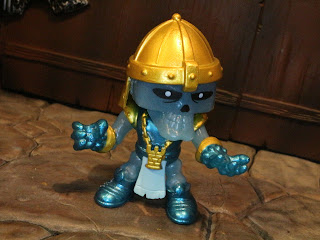 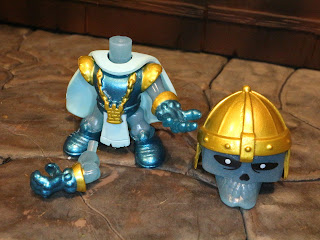 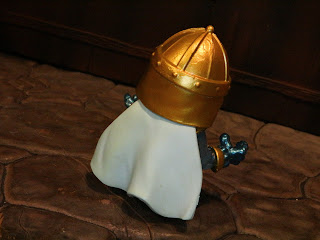 * Interestingly, Lord Lootem comes with an additional accessory that I haven't seen on any other figure: A cape. Remove his head and the cape slides on and off over his neck peg. It's a great piece and it adds some more personality to this figure (who is already oozing with coolness). 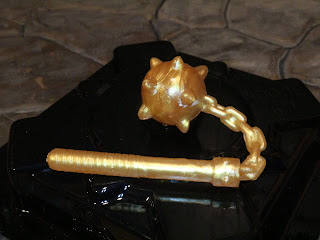 * Lord Lootem is armed with a flail. Cast in a pearlescent gold plastic like the weapons of the other figures in the line (these guys just love gold so much that someone might need to call in Jack Spade to clean things up) the weapon has a cartoonish gold-like appearance. It looks cool, though, and fits well in Lord Lootem's right hand. 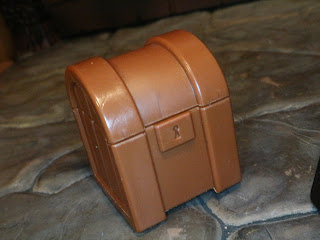 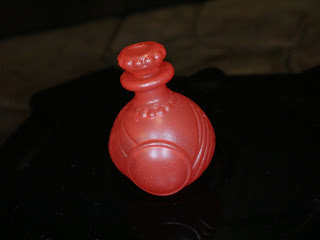 * Every figure includes a treasure and Lord Lootem comes with the Magical Potion. What does it do? I don't know! When I reviewed my first treasure X figure I was under the impression that the treasures were random but they're not. Unless you get one of the actual gold plated case treasures instead of a standard treasure, the standard treasure that comes with each figure is designated. Goldblade has the Jade Fortune Cat, Doctor Goldspell has the Crystal Spear, Rogue Goldsnatcher has the Bronze Sovereigns, and so on. 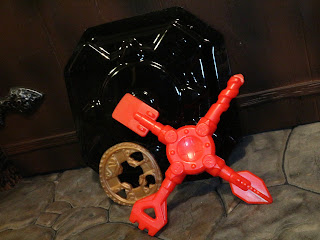 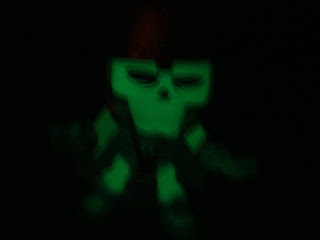 * I mentioned it at the beginning, but it is worth repeating that Lord Lootem glows in the dark. It isn't the longest glow nor the strongest glow but it is still pretty awesome. If anyone has any suggestions on how to take better glow in the dark pictures, I'm all ears. 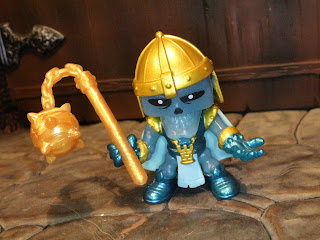 Thus far Lord Lootem is my favorite of the Treasure X figures I've opened. I actually have picked up five as of writing this review (for October I write these early, so I'm actually writing this one from the past!!!) and two have been duplicates (my daughter claimed my second Rogue Goldsnatcher and Goldblade). Considering there are supposed to be 24 different figures in this line I'm kind of turned off by getting a duplicate on my fourth and fifth pulls, especially at $10 bucks a pop. Still, Lord Lootem is a Great and a 1/2 mini and possibly the coolest guy in the set so far. I really want the Scuba Scavengers, but that might have to be something I scoop up from some folks who have picked up extras.