The Revenge of 31 Days of Toy Terror: Leatherhead from Teenage Mutant Ninja Turtles by Playmates 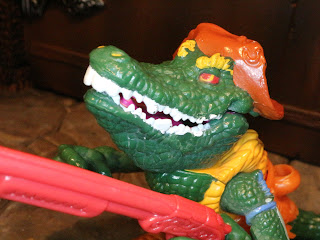 During the first year of 31 Days of Toy Terror I reviewed quite a few action figures from Playmates' Nickelodeon TMNT line. While that line sadly went downhill a year or two into its run we still have the largely excellent line of vintage action figures to look back on, so today I'm checking out a pretty terrifying alligator man: Leatherhead! Released in 1989 as part of the second series of Teenage Mutant Ninja Turtles action figures, Leatherhead was billed as the "Swamp-stompin', Ragin' Cajun Gator" and provided a new enemy for the turtles who also both wanted to defeat them and eat them. What was with all of the TMNT villains wanting to eat the turtles? I mean, even Shredder wanted to dine on turtle soup. What gives? Anyways, let's check out this terrifying backwoods creature after the break... 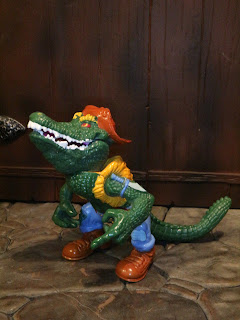 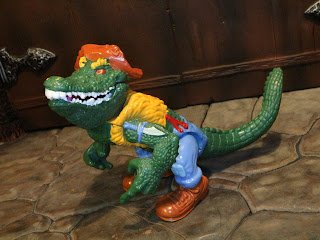 * I've always loved Leatherface, particularly because of his cool proportions. He's shorter than most figures in the TMNT line but he's also longer. The packaging bills him as being 12'4" and 871 pounds although he seems a bit smaller than that. Still, he looks like a fearsome foe for the lean green ninja teens. 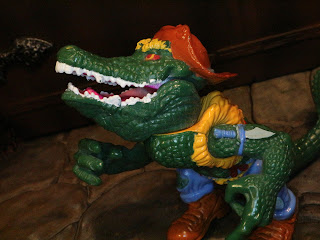 *  I love the sculpt on this guy. You might find it odd to compare Teenage Mutant Ninja Turtles with G.I. Joe figures but I really like both because the sculpts were nearly always unique and were covered with cool little details. Not only is Leatherhead a super well designed character (Alligator man meets Crodocodile Dundee) but he's covered with cool stuff like a swamp hat, a furry vest, and a Bowie knife strapped to his shoulder. 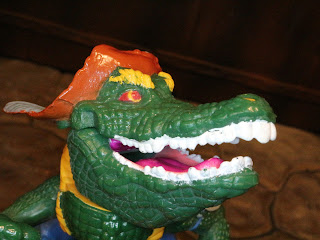 * The headsculpt is awesome. Not only is Leatherhead covered with his detailed skin but he has fearsome teeth, creepy red eyes, and... yellow eyebrows? Do alligators even have eyebrows? Still, they look cool here and give him an excellently unhinged expression. 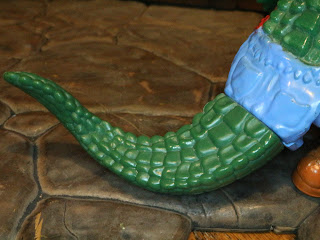 * I dig the tail as well. It's a solid sculpt here and really helps to make Leatherhead stand out from the pack. 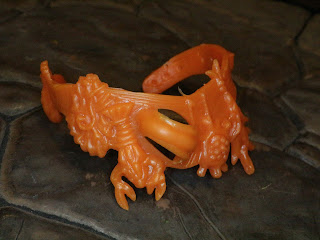 * One of the best things about the vintage TMNT line was the plethora of crazy cool accessories with unique names. First up is the Jumbo Gumbo belt, a bright orange belt that fits around Leatherhead's midsection and carries lots of bizarre stuff around. There's a coin pouch, a crayfish, a tiny turtle, some bullets, and maybe some extra bait and random weeds, too. You know, all the stuff a gator man might need for a night out in the bayou. 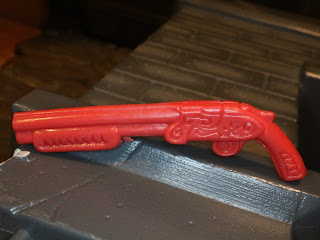 * The second cool accessory is billed as a Swamp Gun. It looks like a shotgun and it features some really cool details that make the "wooden" stock look more elaborate and well designed. Perhaps this is some sort of family heirloom that has been passed down from generation to generation in Leatherhead's family. 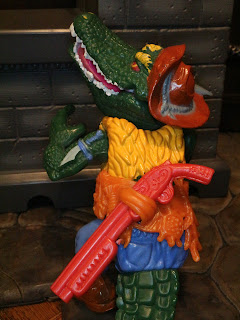 * Not only is the Swamp Gun pretty cool but it fits perfectly in the Jumbo Gumbo Belt. How do you like that? If you're terrified of alligators, doesn't the thought of one toting around a 12 gauge seem even more terrifying? That'd be like someone afraid of snakes imagining a copperhead carrying around an Urumi or someone afraid of bees imaging a swarm of bees who also are members of a prison gang. It's just more intimidating that way. 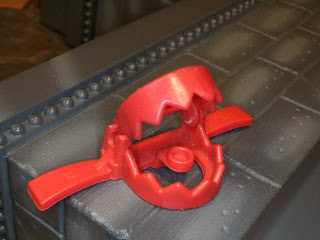 * Last, and kind of least but still cool, is the Turtle Trap. This is a two piece"trap" that features a closing jaw. I always have liked this accessory as it was kind of unique (not many action figures have come with traps like this). I always wanted to stick the trap in Leatherhead's mouth, like some sort of crazy false teeth, but his jaws don't open that wide. 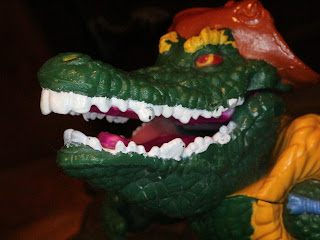 
* As I just mentioned, Leatherhead's jaws don't open that wide. I wish they opened wider but they don't. 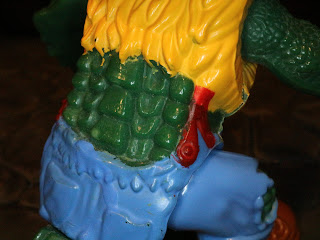 * The paint work on Leatherhead's shirt, suspenders, and pants is a bit messy. I know that this is an older figure and there is a bit of paint wear on mine, but this is all original to the figure. 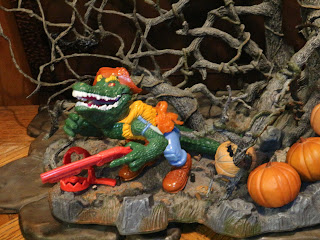 Leatherhead is one of my favorite vintage TMNT figures. He's a solid design that manages to stand out even among the wacky cast of TMNT mutants and he has some great accessories. A swamp soaked utility belt, a shotgun, and a bear trap? Sign me up! This guy might not be your typical movie monster or spooky specter but I think he works pretty well for The Revenge of 31 Days of Toy Terror, don't you? He's a Great and a 1/2 action figure and a gem from a line that is a true treasure trove of mutant madness.

This is actually the first vintage Teenage Mutant Ninja Turtles action figure I've reviewed! If you're interested in more reviews from the line, let me know!
Posted by Barbecue17 at 10/04/2018