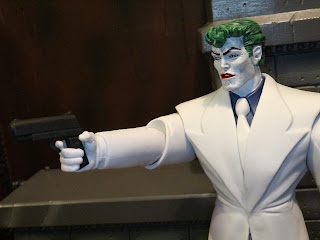 If you're sitting online and reading action figure reviews (which isn't at all something to be ashamed of!) then you really do not need me telling you who the Joker is or why The Dark Knight Rises is such an important part of the history of sequential art (that's a fancy way of saying comic books). Despite Mattel's DC Comics Multiverse line rarely offering up figures that compare to Hasbro's Marvel Legends line, when Mattel puts out comic based figures I think they tend to do really strong work. One of the coolest sub-lines for the Multiverse series has been the various The Dark Knight Returns figures sprinkled into the line. Today I'm looking at The Joker from The Dark Knight Returns, one of the figures from the new Multiverse series which features a King Shark build-a-figure. This is an incredible Joker figure and proof that Mattel can do some great work when they want to. Let's take a closer look after the break... 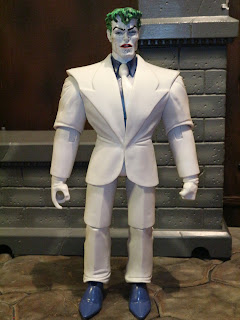 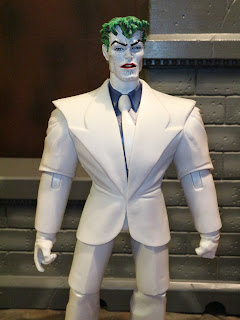 
* Capturing the unusually bulky proportions of Frank Miller's artwork is a huge part of creating action figures specific to these Batman stories and, overall, I think Mattel has done a fine job. The Joker's suit is actually a pliable overlay and his tie is a separate piece attached to his neck and resting realistically between the suit and the torso. The various folds and wrinkles look well and, while the suit is all white, there is some subtle dark shading on it that helps to give it a more grounded appearance. 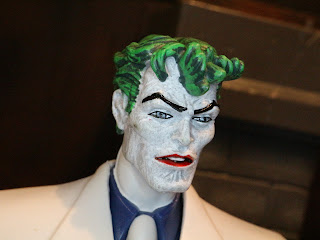 * The Joker had two headsculpts and first up is a more subdued Joker. Don't get me wrong: He's still got wild green hair, blood red lips, and a pasty white face, but the expression is more calculating and less unhinged. This definitely represents the Joker earlier in the DKR storyline when he's just starting to get back into the swing of things. The paintwork is excellent here, as is the sculpting. This really is top shelf work, Mattel. Bravo! 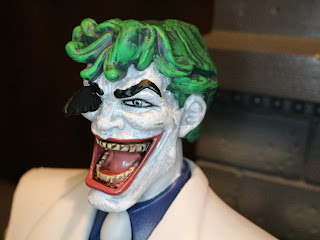 * Oh, but it certainly gets better! Next up is an incredible headsculpt that features the Joker with a maniacal grin and a batarang buried in his right eye socket. While the Joker does run around like this for a bit, it looks a heck of a lot like the face he makes after snapping his own neck, doesn't it? Yikes! I love it! The teeth, eyes, and eyebrows are perfect. Yeah, the batarang is removable, but it's useless on it's own and the head looks weird without it in position. I'm considering this more of a piece that needs assembled rather than two truly separate accessories. 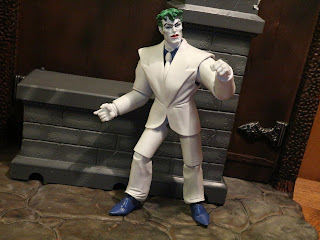 * While the Joker's articulation isn't incredible, it's definitely adequate for his needs.The articulation manages to capture the chunky proportions of Frank Miller's artwork while being relatively functional. While I do wish Mattel would make things like swivel/hinge wrists and ankles standard, the Joker is still a fun, sturdy figure to pose, display, or even play with. 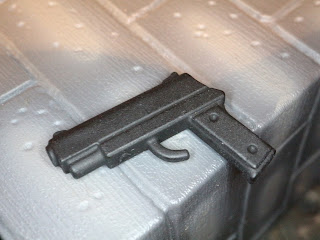 * The Joker includes two weapons (other than the batarang lodged into his eyeball): A pistol and a knife. The pistol looks great and really captures the design aesthetic of the DKR technology nicely. It fits perfectly in the J-Man's right hand. 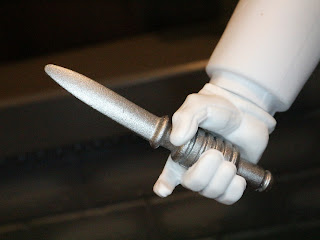 * Second is the knife that Joker stabs Bruce with at the amusement park (it's so sharp that Bruce barely feels it go in). It's a simple but necessary accessory.

*I (rather unwisely) picked this guy up without the build-a-figure pieces for a reduced fee as I only wanted three figures in the set, so I'm left without a piece of the very impressive King Shark. Just know that if you buy this guy new in the package, you'll get King Shark's massive torso as an extra. 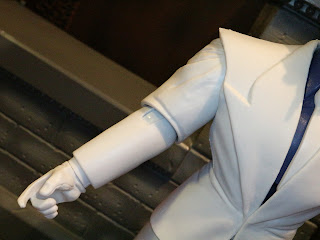 * The only thing that kind of irks me about this figure is the sleeves on the Joker's jacket. While these are sculpted, the lower sleeves look really plain and dull. Also, there is just something about the cuts of the joints that looks off. The elbow is especially kind of unsightly, wouldn't you agree? 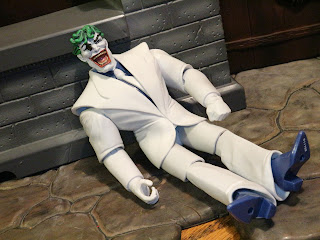 I'm really glad that Mattel has returned to making 6 inch DC Comics action figures as, while they sometimes release some average stuff, they also tend to have a good character selection and frequently release some very inspired choices. The Joker is a very impressive figure and he blows DC Direct's nearly 20 year old figure out of the water. Plus, if you use the batarang head and pose him just right, he's an action figure of a dead Joker. How weird is that, right? It seems like something the Clown Prince of Crime could really get behind. This is a Great and a 1/2 figure and well worth picking up!

Looking for more Joker action figures? Check out the Joker's Gallery where I have all of my Joker reviews committed!